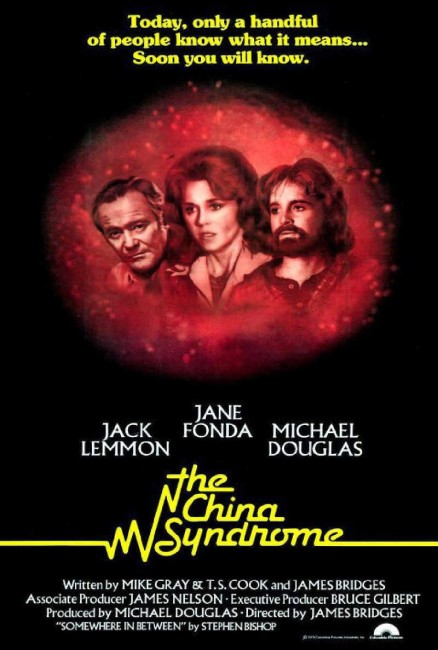 TV newswoman Kimberley Wells and her camera crew are filming a piece at a nuclear power plant when an emergency occurs. Too much water coolant has been dumped from the plant’s core due to the misreading of a faulty gauge but the disaster is averted by controller Jack Godell. Kimberley’s cameraman Richard Adams films the incident, despite orders not to. However, when they try to air the piece on the news they become embroiled in a fight as the plant management tries to silence them. It becomes apparent that the plant managees are covering up the magnitude of the accident. They make the discovery that the reactor core could have become superheated, melted through the floor and fallen to the centre of the Earth where gravity would have returned it, causing a massive nuclear explosion, a process nicknamed The China Syndrome. Meanwhile, Godell makes the discovery that the plant’s security seals have all been faked. When the company tries to stop Godell, he takes over the control room with a gun, demanding that Kimberley be brought in to broadcast the truth of the situation.

The China Syndrome is more a case of science prediction than science-fiction. The film was released only three weeks before the Three Mile Island nuclear accident in March 1979 in Harrisburg, Pennsylvania wherein the real meltdown of a nuclear reactor almost occurred.

The China Syndrome was produced by Michael Douglas who was then a hot producing talent as a result of One Flew Over the Cuckoo’s Nest (1975) rather than an A-list actor. It is a sobering and well-informed treatment of a hot topical issue. More than merely being the filmic equivalent of a political protest rally, it is also an impressive and chilling thriller. There are no artificial suspense tactics – well, there are a couple of car chases but these are tied to the plot and never allowed to take over. The film does unavoidably lecture and the characters are so underwritten they could be played by carpetbags for the difference it would make.

However, director James Bridges draws his suspense out of the humanity of the situation. He keeps one gruellingly enrapt in simply watching the expectant expressions on Jack Lemmon’s face as he waits for the core pressure to drop. The result is unique in that the script gives the actors a virtual blank stage to perform as they will.

And out of the carpetbags chosen, there are three tremendous stand-out performances – from Jane Fonda, who does a spot-on imitation of the slow, almost patronising enunciation of newscasters; the young Michael Douglas who plays with likable hot-headed charm; and, best of all, cat-eyed Jack Lemmon whose weariness perfectly reflects the strain and forthright righteousness of the man. Watching them craft a terrifyingly real, human picture out of material as technically dense as a thesis is a joy. It is they that make the film rivetingly suspenseful.

The film ends on a decidedly ambiguous note, with the sudden ominous blanking out of the tv signal – are we to take it to mean that the China Syndrome finally has happened?

The China Syndrome accrued a host of award season nominations, including Jack Lemmon, Jane Fonda and the screenplay being nominated at the Academy Awards, Golden Globes and BAFTAS, with Jack Lemmon winning at Cannes.

China Syndrome 2 (2005) should not be confused for a sequel and is in fact a pornographic film.