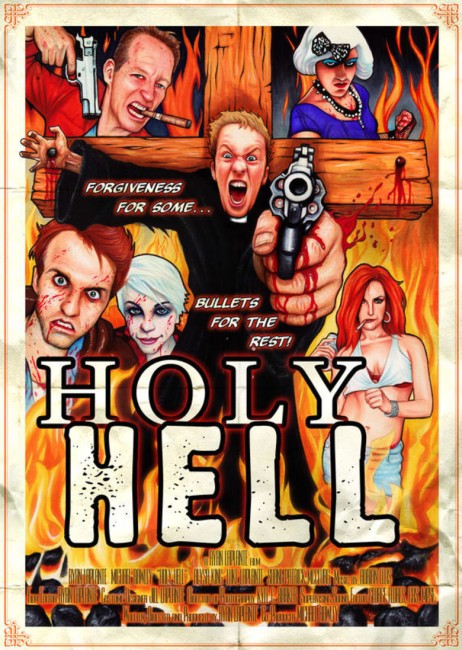 Augustus Bane is a Catholic priest who always determines to think the best of people and act with virtue. He is visiting the Bonner family to help with their wayward daughter Amy when the MacFarlane family burst into the house and take everyone prisoner at gunpoint. The MacFarlanes are determined to have fun for the cross-dressing Sissy’s birthday and proceed to torture the Bonners. They taunt Father Bane about how he could pull the trigger and shoot one of them to save the Bonners’ lives but he is unable to and all but Amy are killed. Afterwards, Father Bane snaps. Taking a gun from a pawnshop, he walks out onto the streets and begins eliminating sin wherever he sees it. Rescuing the now wheelchair-ridden Amy from the hospital and taking her under his care, while trying to resist her sexual advances, Father Bane then sets out to eliminate the MacFarlane family.

Holy Hell is a debut film for Canadian actor/director/writer Ryan LaPlante. Based in the Toronto area, LaPlante has been working as an actor throughout most of the 2000s, having appeared in a great deal of theatre. He has directed a number of Shakespeare productions and a staging of Rent (1994), as well as founded the Vagabond Theatre company in 2009. In between this, he has also done minor tv work as an actor.

With Holy Hell, LaPlante owes a clear debt of inspiration to Hobo with a Shotgun (2011), both in terms of the same demented cartoon grindhouse style and the same basic plot of a downtrodden man rising up to take exaggeratedly ultra-violent revenge. In this case, the protagonist of the film is not a hobo but a Catholic priest (LaPlante comes from a Catholic background). Imagine a less-than-serious version of Nude Nuns with Big Guns (2010), a similar cod grindhouse vigilante-revenge film that had a substantial axe to grind against the Catholic Church, made with the comic-book aesthetic of Hobo with a Shotgun.

As such, Holy Hell is a film that is determined to offend as much as it possibly can with scenes of LaPlante’s priest blowing away sinners with a big gun, resisting (not very well) the sexual advances of Alysa King (who later goes into combat on her wheelchair in a bra with crosses emblazoned on it) and the gleefully outrageous mania of the MacFarlanes. LaPlante has outfitted Father Bane with a series of wildly over-the-top one-liners and everything culminates in a massive bloodbath.

LaPlante made Holy Hell on a low-budget – this is a film that wears its’ sometimes chinzty amateurism with pride, while a large streak of pure dementia and outright bad taste carries it the rest of the way. The performances – particularly those from LaPlante himself who plays Father Bane and Shane Patrick McClurg as the cross-dressing Sissy – have been ratcheted up to a level that regards completely over-the-top as merely a warming-up ground.

Holy Hell should not be confused with Holy Hell (2016), the documentary about an L.A. religious cult that came out not long after this. (Where I live, both films had their premiere screenings within a week of each other to some confusion).