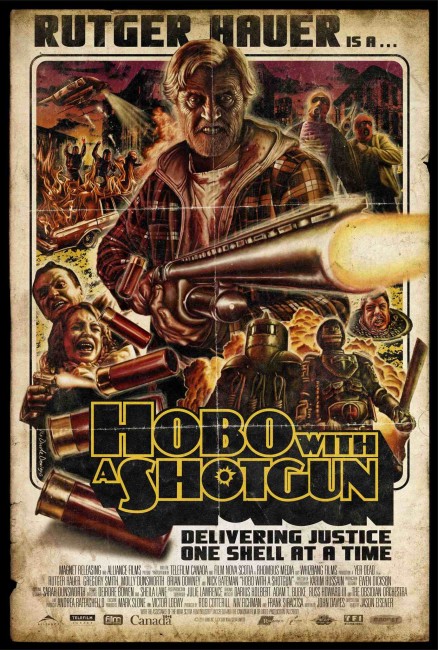 A hobo gets off a freight train in Hope Town but is soon disgusted by what he sees in the streets around him – senseless violence, pimps with schoolgirl prostitutes, bumfight filmmakers, paedophile Santas. The hobo makes a citizen’s arrest of Slick, the son of mob leader Drake, after he attempts to abduct the hooker Abby. Instead, when he gets to the police station, the hobo is beaten up corrupt cops and the word ‘scum’ carved into his chest by Slick. Abby takes the hobo to her place to recover. Caught in a robbery at a second hand goods store, the hobo grabs a shotgun and blows away the thieves. Taking the shotgun, the hobo starts to clean up the streets of the pimps, paedophiles and bumfight filmmakers. This earns the wrath of Drake and sons who torch a busful of children and threaten to kill each child in the city, unless the parents eliminate every homeless person.

Hobo With a Shotgun began its life when Robert Rodriguez and Quentin Tarantino made Grindhouse (2007) – see Death Proof (2007) and Planet Terror (2007) – and held an international competition for fake grindhouse/exploitation styled trailers. The contest was won by Rob Cotterill, John Davies and Jason Eisener from Nova Scotia, Canada with a trailer for Hobo With a Shotgun. A number of faked trailers from professional filmmakers played in between the two films, although Hobo With a Shotgun only screened in the Canadian theatrical version of Grindhouse. Hobo With a Shotgun now becomes the second of these trailers to be spun off as its own film, following Robert Rodriguez’s Machete (2010). (One would love to see Rob Zombie’s Werewolf Women of the SS get its own film someday). Newcomer director Jason Eisener and associates obtained funding to expand the short as a feature film here, which duly became one of the hits of the 2011 Sundance Festival.

Hobo With a Shotgun hits in from the first few minutes. We are introduced to Rutger Hauer’s hobo as he arrives in Hope Town and witnesses the corruption on the streets. These include a whacked-out scene where Brian Downey and sons take a relative (Robb Wells), place a manhole cover around his neck, dump him down the manhole, tie a barb-wire noose around his neck and decapitate him by attaching the other end of the noose to their car as they drive off, while a woman in lingerie and a fur coat dances in the shower of blood and the severed head is then placed on the car as a hood ornament. This fairly much presages the tone of the rest of the film.

Hobo With a Shotgun comes close to being a one-note joke at times and would be in any lesser director’s hands. However, Jason Eisener gives the film such an enthusiastic pulp energy that he transcends this. With its high degree of farcically unreal gore, Hobo With a Shotgun arrives at a level of cartoonishly surreal absurdism not unakin to The Evil Dead II (1987) or early Peter Jackson films like Bad Taste (1988), Meet the Feebles (1990) and Braindead/Deadalive (1992). Jason Eisener directs everything with a series of hyper-real colour saturations, handheld camerawork and a frenetic editing scheme that keeps everything so busy it helps disguise a low budget.

The dialogue is frequently hilarious: “Shut your goddamn mouth or I’ll carve welfare cheques from your skin,” Rutger Hauer threatens at one point. Not long after, he bodily drags Gregory Smith into the police station: “Lock him up with the sodomites and get me the chief of police now.”

In terms of its plot, Hobo With a Shotgun could be a variation on Taxi Driver (1976), albeit with Martin Scorsese’s grim social realism and grinding psychosis replaced with a dementedly tongue-in-cheek B-movie sensibility. Rutger Hauer’s nameless hobo is another Travis Bickle who arms himself and begins blowing away the degenerate in a moral crusade against corruption in the city. Similarly, there is also a prostitute (Molly Dunsworth) that he sees as the embodiment of innocence, even keeps referring to as a teacher, and becomes determined to save.

The film never takes much of this terribly seriously – one suspects a part of this would be a desire not to open up a particular can of worms that would trivialise the very real social problems of homelessness and poverty.

Rutger Hauer has been languishing in too many B-movie parts since the 1990s. While Hobo With a Shotgun is no better budgeted, it gives him the chance to get his teeth into some more substantial acting than he has in some time. Hauer, who hits age 67 at the time the film comes out, now has just the right naturally weatherbeaten look in the part.

Jason Eisener next went onto direct the Y is for Youngbuck segment of The ABCs of Death (2012) and Slumber Party Alien Abduction episode of V/H/S/2 (2013). He also acts as a producer on Turbo Kid (2015).