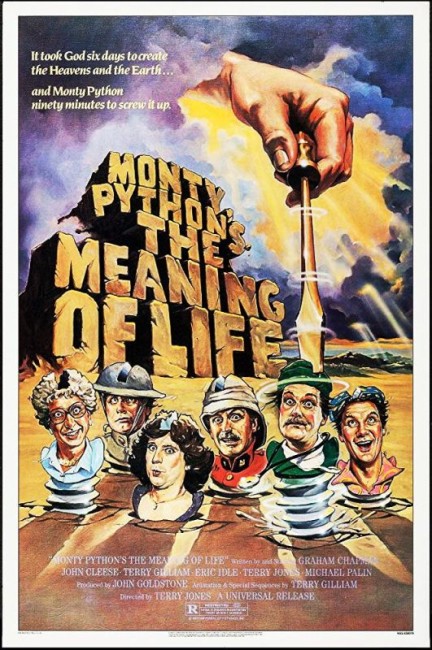 The Meaning of Life was the fourth and last film made by the Monty Python troupe. The Monty Pythons had of course first appeared in the cult tv series Monty Python’s Flying Circus (1969-74). The group repeated various of their most popular skits in their little seen first film outing And Now for Something Completely Different (1972). They then found their cinematic stride with the hilariously surreal skewering of the Arthurian legends with Monty Python and the Holy Grail (1975) and especially with the blasphemously funny take on the life of Christ in Monty Python’s The Life of Brian (1979). Aside from the concert performance film Monty Python Live at the Hollywood Bowl (1982), Monty Python’s The Meaning of Life would be the last time that the Pythons came together. A further film tentatively titled Monty Python’s World War III was briefly mooted but never emerged.

By the time of Monty Python’s The Meaning of Life, the central members of the troupe were all going in separate directions – Terry Jones had developed a career as a writer and director with films like Personal Services (1986) and Erik the Viking (1989); Terry Gilliam was developing a considerable career as a director with films like Time Bandits (1981), Brazil (1985), The Adventures of Baron Munchausen (1989) and others; John Cleese had embarked on a successful acting career; while Michael Palin was working both an actor and a presenter of various travel tv series. Several of the troupe did reunite several years later to provide voice work for the animated biopic A Liar’s Autobiography: The Untrue Story of Monty Python’s Graham Chapman (2012).

Some of the skits work, others do not. There is a very funny song-and-dance jibe at Catholicism featuring the song Every Sperm is Sacred. Most bizarre is The Crimson Permanent Assurance, the unmistakably Terry Gilliam-esque short prefiguring the main film, about an insurance company that weighs anchor to become a pirate ship on the seas of high finance and later invades the main feature. The sequence contains some wonderfully absurd images of old duffer British bureaucrats waving fan blades, paperweights and brollies as swords, filing cabinets used as cannons and the captain being served by the tea lady at the helm.

As with any Monty Python film, the bounds of good taste are exceeded – this one indulges in live acquisitions for liver transplants and the sequence that everybody remembers where a unbelievably overweight man eats so much he explodes and sprays an entire restaurant in vomit. Other skits like the Growth and Learning sequence with John Cleese as a teacher giving live sex demonstrations in class, the Fighting Each Other sequence that parodies Zulu (1964), and the Middle Age sequence where Death comes to dinner and a song parody of philosophers seem funnier on paper than they do on film.

The results show the Monty Pythons having become a little flabby. Or perhaps it was simply that through the raising of the original skits to a hagiographic pantheon that maybe even the greats are not on perfect form all the time.