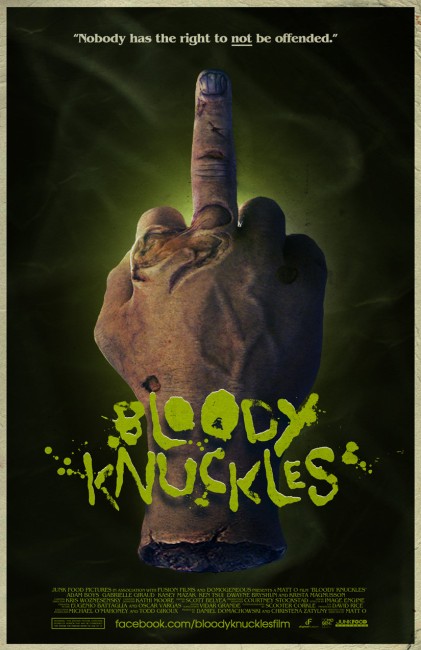 Comic-book artist Travis Warner produces the ‘Vulgarian Invasions’ comic-book and prides himself in taking a no holds barred approach to offending everybody. However, his most recent issue parodying local Chinatown crimelord Leonard Fong, who was responsible for the importation of a rat poison that has deadly toxic effects on humans, causes Fong to take offence. Fong has Travis abducted and orders his henchman to cut off Travis’s right hand. Trying to cope in the aftermath, Travis then finds his severed hand coming back to taunt him and make his life a misery. The hand then takes it upon itself to start enacting revenge against Fong and his cronies.

Bloody Knuckles is a feature-length debut for Canadian director Matt O’Mahoney who bills himself as Matt O. (In most cases, a director who goes by either one name or a shortened version of his name is designed for ridicule, notable examples being McG, Kaos and Pitof). Matt O had previously made seven short films, all of which appear to fall into the horror genre and spoof its tropes.

Bloody Knuckles is a film that sets out to push as many hot buttons as it can in regard to revelling in the offensive and downrightly bad taste. Alas, it feels like a film that has arrived about twenty years too late and is flogging a particular sub-genre that hit its peak during the late 1980s/early 1990s with films such as Re-Animator (1985), Peter Jackson’s Bad Taste (1988) and Meet the Feebles (1990), and of course the principal output of Troma Films with works such as The Toxic Avenger (1984), Class of Nuke ‘Em High (1986) and Surf Nazis Must Die (1987), among others. (For a more detailed overview see Bad Taste Films). It may say something when you can sit watching a film with plentiful gore and meltdown effects, swastika-daubed vibrators, dubious racial humour and masked gay avengers who come wearing leather fetish gear and gimp masks, and end up feeling more bored by the films efforts to offend you than you ever do in laughing at its un-PC outrages.

I hate the use of the phrase ‘trying too hard’ as a critical term – I think everybody who sets out to make a film, especially those on reduced budgets, work as hard as they can and such a term diminishes earnest effort. It seems one of those vague phrases that people wave around when they refer to a film that seems to be jumping about saying “look at this” and trying to draw your attention to an effect they are trying to achieve. Bloody Knuckles feels like that.

Surely the extent to which it misses its mark is the fact that rather than the gonzo cartoonish energy that fires up most of the above mentioned, this is a film that seems to be doing the very Canadian thing and apologising for being offensive, or at least has several speeches where characters are trying to justify being offensive as artistically necessary. To me, this is the kiss of death. Troma, Peter Jackson et al never concerned themselves with trying to justify their actions, they were like schoolboys trying to be naughty and throw as much muck as they could in the direction of the stiff and uptight gatekeepers of proper morality.

Aside from that, Bloody Knuckles feels like no more than a warmed-over version of Oliver Stone’s The Hand (1981) – there is a great deal of similarity between the central plots of both that feature a comic-book artist whose hand is severed and returns to take revenge on his tormentors. Even before that there has been a long history of films about disembodied hands going all the way back to The Beast With Five Fingers (1946) and passing through the likes of Invasion of the Saucer Men (1957), The Crawling Hand (1963), Dr Terror’s House of Horrors (1965) and the more spoofy likes of The Evil Dead II (1987), Waxwork II: Lost in Time (1992), Quicksilver Highway (1997) and Idle Hands (1999), not to mention a disembodied hand becoming a regular character in tv’s The Addams Family (1964-6). (For a more detailed overview see Disembodied Body Parts).