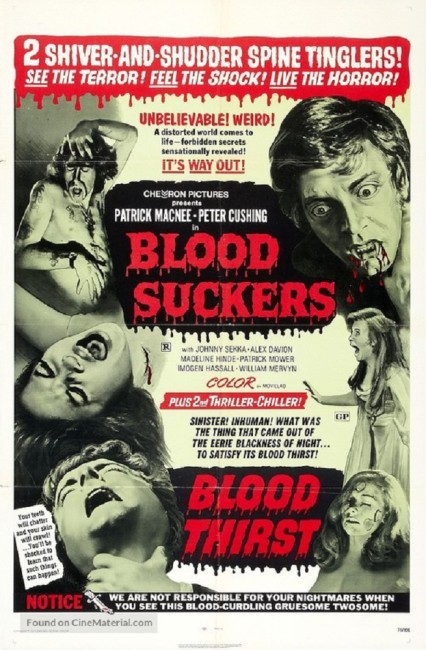 British Foreign Office assistant Tony Seymour is sent to Greece to find Oxford don Richard Fountain who has gone missing while researching ancient Minoan rites. Seymour discovers that Fountain has fallen in with a group engaged in orgies and Satanic rituals. He finds Fountain with the group’s leader Chriseis Konstantanini drinking his blood. Seymour realizes that Fountain is suffering from impotence, believing that his fiancee’s father, the college provost Dr Goodrich and the academic system Goodrich upholds, is psychologically castrating Fountain and that the only means by which he can obtain sexual liberation is in the drinking of human blood.

Incense for the Damned is one of the more unusual films in the canon of cinematic vampire lore. It is also one of the more controversially debated films in the genre – and more than anybody by its director Robert Hartford-Davies who hated the ending that was forced onto the film and substituted a pseudonym.

What one does find is an impressive attempt to pare away to the centre of the vampire myth. The central metaphor the vampire film operates on – that vampirism is sublimated sexuality – is here spun out as literal fact. Edward Woodward has a scene where he potently explains vampirism is a perversion brought on by sexual impotency where the drinking of and having blood drunken serves as surrogate orgasm. This is wound into a complex metaphor that sees the Oxford academic structure as vampiric in nature – Patrick Mower has a striking speech where he stands up and denounces the parasitism of the academic system, calling provost Peter Cushing in effect the head vampire. (As a perfectly sardonic after-note, Peter Cushing stands up, apparently oblivious to Patrick Mower’s meaning and demands order).

The other side of the coin the film presents is also striking – that the only relief from a rigidly ingrained system is to be found in the youth movement. However, the youth movement is not seen as liberating, as it usually was in most films of this period, but is instead painted as inhabited by Satanic orgiastists, drug takers and murderers – exactly what some of the more extreme critics were denouncing it as. Incense for the Damned in its condemnation of both the repressive order of the class system and the wild liberation of the youth movement – yet also seeing both as deeply intertwined – makes a striking metaphor.

What does mar Incense for the Damned is the ending that was forced on against director Robert Hartford-Davies’ wishes (resulting in him having his name substituted) wherein Johnny Sekka takes Alex Davion to Patrick Mower’s coffin and hammers a stake through his heart. It is an ending that vilifies the rest of the film, which has up until that point explained vampirism away as being purely a psychological perversion.

Outside of this, Robert Hartford-Davies proved to be a minor British director who worked in various exploitation genres without ever making anything of distinction. His other films of genre interests are:– the Gothic horror The Black Torment (1964), the mind-boggling sf/pop music film Gonks Go Beat (1965), the mad surgeon film Corruption (1967) and the psycho film The Fiend/Beware My Brethren (1971).