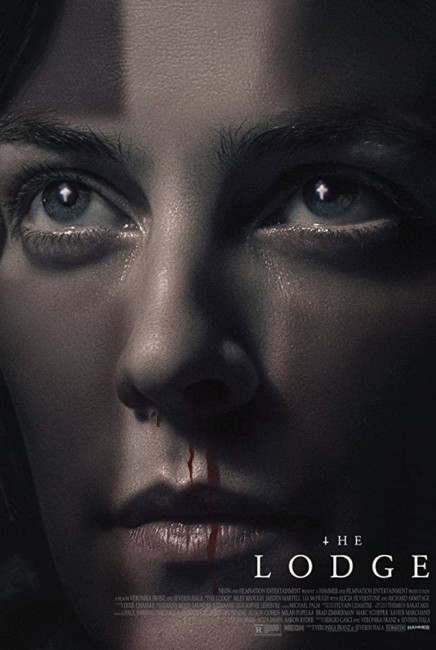 After learning that her estranged husband Richard is intending to marry Grace Marshall, the woman he has been seeing, his ex-wife Laura shoots herself. Six months after the funeral, Richard suggests to their two children Aiden and Mia that Grace join them at a lakeside lodge for the Christmas holiday and use this as an opportunity to get to know one another. The children look online and find that Grace was the sole survivor of the mass suicide of a cult that was headed by her father. Arriving at the lodge, the children meet Grace but treat her with unfriendliness. Richard has to return to the city on a work matter and leaves the children in Grace’s care. Grace wakes to find that their clothes, food, belongings and her medication are all missing. She sees haunted messages and believes that the ghosts of the cult members are calling for her to repent of her sins.

Hammer Films had their heyday between 1957 and 1976 with a prolific output of horror films, usually starring either Christopher Lee or Peter Cushing and frequently set during the Victorian era. Hammer ceased theatrical production in 1979 until the company name was purchased in 2008 by Dutch tv producer Jon de Mol who immediately started making a new series of horror films. So far to come out under the revived Hammer banner have been Let Me In (2010), The Resident (2011), Wake Wood (2011), The Woman in Black (2012) and The Quiet Ones (2014), as well as the web-released serial Beyond the Rave (2008).

The Lodge was the third film for Austrian duo Severin Fiala and Veronika Franz. The two first appeared with the documentary Kern (2012) and several short films then made the horror film Goodnight Mommy (2014), which gained some very good word of mouth at various international film festivals (the first Hammer film, as far as I am aware, to play non-fantasti festvals). In between, they also made the standout The Sinful Woman of Höllfall episode of the horror anthology The Field Guide to Evil (2018).

What should be noted about the modern Hammer films is that they are almost the complete antithesis of what they were back in the studio’s heyday. The original Hammer films were made by a revolving but tightknit line-up of the directors, writers, producers, actors, musicians, productions designers and camera people and were shot under the same studio roof. By contrast, the modern Hammer films are merely a brand name that have no common personnel. They are made in different countries and merely feel like it is a distributor’s name slapped on films made by entirely different crews. There is no common theme, style or design schemes to any of the modern Hammer films.

It is worth comparing The Lodge to classic Hammer films. You could aliken it to the cluster of films it most resembles – the psycho-thrillers that Hammer produced in the 1960s with A Taste of Fear/Scream of Fear (1961), Paranoiac (1963), Maniac (1963), Hysteria (1964), Nightmare (1964), The Fanatic/Die, Die, My Darling (1965), The Nanny (1965), Crescendo (1970) and Fear in the Night (1972). In contrast, Fiala and Franz’s slow accretion of detail and atmosphere is almost the complete opposite of a classic Hammer film. If The Lodge had been made as a classic Hammer psycho-thriller, Riley Keough’s character would have been played by an actress of the day like Judy Geeson or Veronica Carlson and the shocks would have been much more upfront. Much of the show would have been built as a big dramatic shock around the jolt reversal that would come towards the end.

The Lodge – not to be confused with the earlier B-budget horror film The Lodge (2008) – is a real slow burn of a film. Fiala and Franz’s pace is slow, muted, uneventful. There are shocks but they seem quiet to the point of understatement. In fact, it is not until after the one-hour point that I could be sure I was even going to write this up as a genre film – rather what it seemed like I was watching was a cabin fever drama. In fact, it is probably too slow a film for any kind of multiplex release – the film premiered at Sundance and played various international film festivals and some limited theatrical playdates before being released to streaming platforms in April 2020.

The plot about a girl who is the sole survivor of a cult mass suicide being haunted by the apparent ghost of the cult leader demanding she join them was done before in Bad Dreams (1988). The Lodge even repeats the same twist that Bad Dreams offered – [PLOT SPOILERS] that the entire haunting was mundane in origin and had been set up to gaslight the heroine. You could maybe coin the soundbite description to say that The Lodge could be Bad Dreams by way of The Shining (1980). The haunted cult survivor plot of the former is combined with the set up in the Kubrick film about cabin fever at a frozen locale and a dive inside a protagonist’s fragmenting mental state that sits alongside an explanation of possible hauntings.

The shocks in The Lodge come so low-key and understated you almost miss them if you blink. The film’s effect is all in watching Riley Keough’s mental disintegration. (Although the film does get a great and unexpected shock off in the first couple of scenes where Alicia Silverstone comes to an unexpected end). It is only really in the last quarter that The Lodge starts to come together as a horror film. We get the calmly understated twist about what happened to all the belongings. There’s a great shock in the hard to watch scene where Riley Keough kneels on the burning logs from the fireplace as repentance, before the film reaches a grim and very bleak ending.