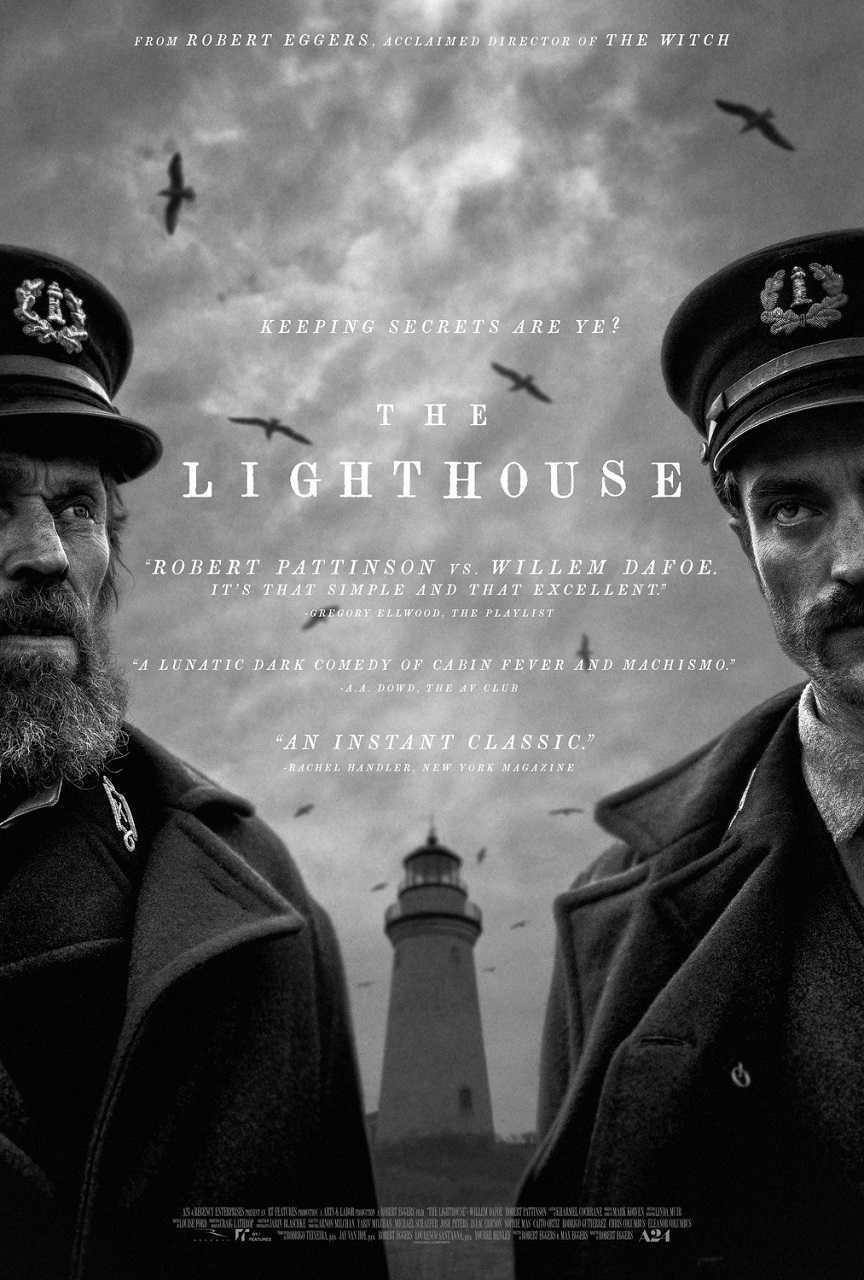 New England, the 1890s. Ephraim Winslow arrives to take up a position as an assistant to lighthouse keeper Thomas Wake. He soon finds that life under Wake is a harsh and demanding one where he is expected to do as he is told without question. In between increasing periods of rampant drunkenness, tensions grow between the two men, which starts to wear on Winslow’s sanity.

Robert Eggers made an extraordinary word-of-mouth debut with The Witch: A New-England Folktale (2015) set during the Puritan era as a family attempt to establish a life in the remote countryside while beset by fears of sin, evil and witches all around them. The film gained considerable acclaim and promoted Robert Eggers as a major new name. For a time, Eggers was purported to be next planning a remake of Nosferatu (1922) but his second film emerged with The Lighthouse. Eggers subsequently went on to make the Viking saga The Northman (2022).

The Lighthouse.received a good deal of acclaim after its premiere at Cannes and appeared on a number of 10 Best lists for 2019, as well as being nominated for Best Pictures, Best Director and both Robert Pattinson and Willem DaFoe for acting awards at various critics circles, although were only nominated for Best Cinematography at the Academy Awards.

Robert Eggars and his brother Max started out planning to make an adaptation of Edgar Allan Poe’s The Lighthouse. This was a fragment of a story that Poe left unfinished when he died in 1849 – the title was only added by the publisher when the piece was eventually printed in 1909. The story only runs to a few hundred words and consists of very little – a handful of entries from the diary of a man who has arrived to take up a position as a lighthouse keeper and is relishing being alone. There is nothing about the piece that even pushes it into the horror category. The Eggers’ kept the title but eventually abandoned any adherence to the Poe fragment.

Robert Eggers is a director fascinated with the way people live historically. In The Witch, Eggers based his dialogue on surviving documents from the era, while The Northman was acclaimed by historians as the most accurate film made so far about the Viking era. Similarly here, he has based the dialogue on Herman Melville, various journals of lighthouse keepers of the period and Sarah Orne Jewett, a 19th Century novelist who set her works among the people of the Maine seacoast. Equally, Eggers is fascinated with the harsh conditions of life during these periods. He took a film crew to Nova Scotia and makes the interesting choice to shoot the film in black-and-white in a 1:19:1 aspect ratio, something that gives the film a constrictive feel that makes it look like you are watching a 16mm print.

There have been assorted films about lighthouses and lighthouse keepers before this. In genre material, we have had the likes of The Monster of Piedras Blancas (1958), Tormented (1960), Watchtower/Cruel and Unusual (2001), the previous adaptation of the Edgar Allan Poe story with Edgar Allan Poe’s Lighthouse Keeper (2016) with the best of these Xavier Gens’ wonderfully creepy Cold Skin (2017). All of these run to fairly similar themes – of the isolation of the job causing madness and insanity, the tension between those in a contained location, or of the lighthouse keepers befriending/liaising with creatures from the sea.

The Lighthouse feels like less a work of outright horror like these others than a work that delves into a state of mind. There are not so much dramatic scenes and happenings throughout than it is a case of Eggers keeping his camera on the two men in a series of montages – scenes of them eating, drinking, yelling at one another interspersed with moments of tenderness. That and montages of scenes with Robert Pattinson tending the furnace, wheeling barrows of coal back up through the rain and emptying the chamber pots over the cliff. The visual tone is harsh and austere, where Robert Eggers feels like he is drawing us inside the fevered madness into which the two men are sinking.

Like The Witch and The Northman it also becomes a film where the surreal and fantastic blur with the mundane. Robert Pattinson sees shapes in the surf and then encounters a woman washed up in a pile of seaweed. Later it turns out she is a mermaid and he is seen humping her on the rocks. This may be connected to the mermaid talisman he finds inside his mattress. Later he hauls up a severed head in a fishing net. Willem DaFoe engages in strange rituals in the light chamber and at various points is seen spreading tentacles beneath him and turning into a naked god-like being that blasts Pattinson with raybeams from his eyes. Quite what is going on – whether these are subjective hallucinations along the lines of something like Repulsion (1965) or what – is something Robert Eggers never clues us in on. It was the same in The Witch where you could never be certain whether the evils lurking in the woods were a real menace or something imagined by the fiercely puritanical family.

On the other hand, the broodingly intensive state of mind comes to be all of the film. It is intensive and unsettling, drawing one into its space. But it is also uneventful. When Eggers gives us a scene about the 40-minute mark where Robert Pattinson batters a seagull to death, it is a shock as much for the violence of the act as it is for being the only burst of drama and action in the film up until that point. On the other hand, the constant brooding never goes anywhere – it is like all horror film lead-in that never reaches a punchline or climax. The end of the film comes but it does so without dramatic resolution and any feeling of a story being wound to a natural conclusion.