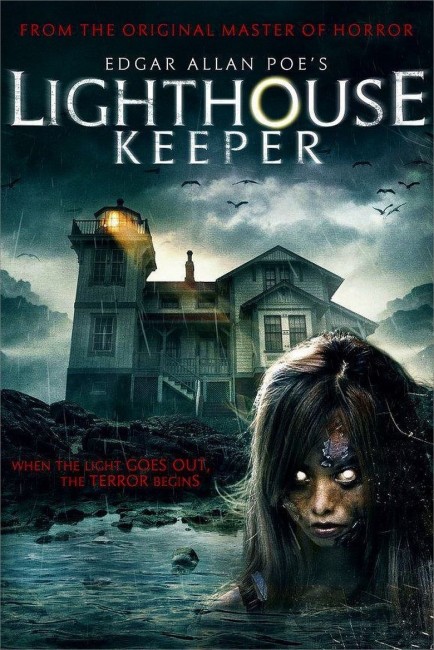 The early years of the 20th Century. A young man washes up on the beach of an island where he is found by a mystery woman. In trying to follow her, he falls from the cliff. He comes around in the house of the taciturn lighthouse keeper Walsh. Asked who he is, the young man realises that he has no memory. The only clue to his name is the initials J.P. on his monogrammed handkerchief. Walsh also insists there is no woman on the island but J.P. follows and meets her. An attraction grows between them but she asks that he not tell Walsh of her presence because he is crazy. At the same time, J.P. also begins to realise that there are ghosts present on the island.

Edgar Allan Poe (1809-49) has a long history on film going back to the early silent era – the first adaptation appeared in 1909 and the IMDB lists over 340 others since then. Poe reached a popularity during the 1960s with the string of adaptations from Roger Corman beginning with The House of Usher (1960), which was followed by a host of other filmmakers climbing aboard the trend with other adaptations or spuriously Poe-connected titles. There were assorted adaptations throughout the 1980s and 90s but interest in Poe appears to have dropped off in the 2000s with adaptations being thin on the ground – apart from Ligeia (2009), the animated Poe anthology Extraordinary Tales (2015) and a handful of softcore gay adaptations from David De Coteau with The Raven (2007), House of Usher (2008) and The Pit & the Pendulum (2009) – although there was The Raven (2012), a murder mystery set during the last weeks of Poe’s life.

Lighthouse Keeper is based on the least known of all Poe’s stories. The Lighthouse is a fragment of a story that Poe left unfinished when he died – even the title was only something added by the publisher when the piece was eventually printed in 1909. It only runs to 747 words, slightly fewer than there are in this review. The story consists of very little – a handful of entries from the diary of a man who has arrived to take up a position as a lighthouse keeper and is relishing being alone – and even then there is nothing about the piece that pushes it into the horror category. Poe may well have been intending to add such in the rest of the story; equally, he also wrote non-horror stories but the truth is that nobody knows. This is of little concern to the makers of Lighthouse Keeper who readily embellish the fragments to create a ghost story. Indeed, all that the film and story have in common is the setting and the observation that the lighthouse has been built on chalk. The same Poe fragment later inspired Robert Eggers with The Lighthouse (2019).

Between Vernon Wells’s brooding lighthouse keeper who recites sections of Poe’s Lenore (1843) while drunk, the mystery girl on the beach, the phantoms and Matt O’Neill’s amnesia, director Benjamin Cooper provides an adequate assemblage of ghost story elements. The film is on the slow side but Cooper produces passable atmosphere and even occasionally spooky moments. On the minus side, the film is low budget. You have to commend that it does produce period atmosphere quite well within these limitations. On the other hand, the digital effects of the ship about to crash on the rocks are painful.

The film seems promising but eventually falls down in its latter half. [PLOT SPOILERS] The revelation that mystery girl Rachel Riley is a ghost is no surprise at all. There is one scene where she and Matt O’Neill are making out on the beach and she momentarily turns into something dead that looks more schlocky than effective. Finally the film loses itself in an ending that makes no real sense. Matt O’Neill finds photos dated 1930 and 1964 that seem to indicate he is either the lighthouse keeper’s son or a young version of the lighthouse keeper, while the flashbacks indicate that he may have conducted the murders himself. Or maybe he is in some kind of fugue state akin to Edward Norton in Fight Club (1999) and imagines that Vernon Wells is himself. Nothing is done to resolve this. The film arrives at an even more baffling ending where Matt O’Neill escapes but then washes up on the beach, sees Rachel Riley again and the events of the film seem about to repeat themselves all over again.

Edgar Allan Poe’s Lighthouse Keeper was the fourth film for Benjamin Cooper who had previously made the nuclear fallout shelter drama Omega Diary (1999) and the horror films The Brink (2006) and Primitive (2011).