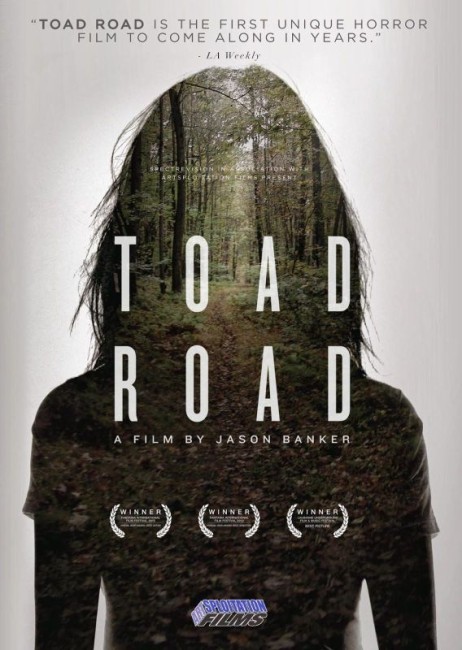 James is hanging out with a group of friends and doing a lot of drinking and recreational drugs, much to the displeasure of his father. His girlfriend Sara is obsessed with the local urban legend of Toad Road, a pathway in the woods that is supposed to lead to the gates of Hell. She persuades James to walk along the path following the nine gates. After each gate, something progressively more extreme is meant to happen, beginning with feeling of dis-ease, to the point that being and eventually time no longer make sense. Reputedly nobody has ever made it beyond the fifth gate. After they set out along the Toad Road, James returns alone and Sara appears to have vanished.

Toad Road is a debut feature for Jason Banker. The film did well at various international film festivals and gained a small word of mouth reputation. The film was seen at one of the festivals by Elijah Wood who then promoted it in arthouse release throughout the US in 2013 via his Spectrevision company. It did the rounds of cult arthouses where it even seemed to gain a small midnight following.

In conception, Toad Road feels like a cross between Ben Wheatley’s mad drug hallucination film A Field in England (2013) and the cryptically fascinating YellowBrickRoad (2010) about a group of people traversing a trail where the ordinary rules of reality have started to disappear and the landscape itself seems to be affecting their sanity. All of this seems very promising territory for an indie film to be getting into in terms of premise.

Toad Road has a surprisingly short running time of 76 minutes. The disappointment in viewing it as a genre film is that nearly two-thirds seems to be little related to horror territory. These scenes consist of a group of people hanging out together, taking drugs and getting generally fucked up. If this is your type of film, then at least Jason Banker portrays this with a high degree of naturalism, something that is almost documentary, if not Found Footage, like. There are frequent times throughout where you are given cause to wonder if the scenes of drug taking are actually taking place and Jason Banker has simply aimed his camera at the participants or whether it is all very convincing acting on the part of the actors.

The film also follows the convention of The Blair Witch Project (1999) in choosing an all-amateur cast and giving the characters the same names as the actors, which adds a double level of seeming authenticity to the exercise. Furthermore, the film has a bizarre real-life resonance where, in an uncanny parallel to the character she plays who disappears in mid-film, lead actress Sara Anne Jones died of a drug overdose only a few months after the film’s premiere. It is something where your first impression is to regard this with a certain cynicism and feel like the film could have fabricated such a tale to give itself a publicity boost (such does however appear to be genuine).

On the other hand, Toad Road is more promise than it ever is delivery. It seems to opens the door to a horror treatment and then closes it again without ever dealing with the fascinating premise it sets up. We see James Davidson and girlfriend Sara Anne Jones setting off into the woods and some of the strange things beginning to happen (although, as we never actually see anything happen, we can’t also be sure these are not just them wandering around stoned either). He returns, she doesn’t and he then spends some fifteen minutes dealing with the anguish of her going missing. It feels like another The Picnic at Hanging Rock (1975) where the exact nature of the disappearance is a narrative sleight of hand that is kept deliberately unexplained for us, where the whole point of the film is to leave us guessing about what happened. On the other hand, Toad Road is a film that is operating without the brilliance of Hanging Rock‘s enigma and only proves frustratingly elusive in terms of providing anything.