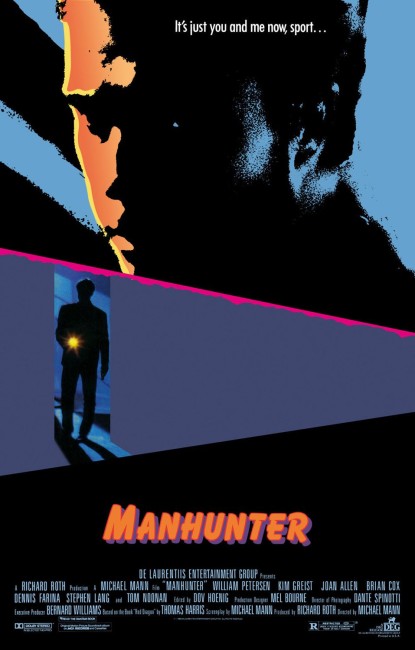 aka Red Dragon: The Pursuit of Hannibal Lecter

Former FBI psychological profiler Will Graham is pressed to come out of retirement. The FBI need his expert help in tracking down a serial killer nicknamed the Tooth Fairy who is methodically slaughtering entire families and has been so named for the bite marks he leaves on his victims. Graham’s search for The Tooth Fairy requires him to confront a nemesis he apprehended in the past – the cannibal psychologist Dr Hannibal Lecktor.

Manhunter is an adaptation of Thomas Harris’s best-selling novel Red Dragon (1981). What is less well known is that Red Dragon/Manhunter was a predecessor to the far more famous The Silence of the Lambs (1991) and features the first screen appearance of Hannibal Lecter. (For some reason, Lecter has been renamed Lecktor on the film’s credits – although when the film was re-released on video following the success of The Silence of the Lambs it was retitled Red Dragon: The Pursuit of Hannibal Lecter).

Manhunter was made by Michael Mann, who had previously directed the stylish thriller Thief/Violent Streets (1981) and the would-be arty horror film The Keep (1983), as well as created tv’s cult hit Miami Vice (1984-9). Mann would later go onto mainstream critical acclaim with the gangster films Heat (1995) and Public Enemies (2009) and the Academy Award-nominated true stories of The Insider (1999) and Ali (2001).

Michael Mann directs Manhunter in washes of expansive vogue architecture, drenched flushes of pastel lighting and sweeping walls of metallic synthesizer beat and moody pop songs, the same style that characterised Thief and The Keep and set off a fashion trend with Miami Vice. The photography is frequently stunning with beautiful shots of Florida sunsets beyond full-length bedroom windows, golden strips of sunset on navy sky beyond the wing-tip of a plane and so on.

Regrettably, it is a style that seems at odds with the tight steel-trap of a plot that was in the Thomas Harris novel. Michael Mann’s obsession with style seems to trivialise and distract Harris’s story, it transports the plot into a dreamily unreal netherworld ie. is there truly anybody out there who would build such a giant folly as a pure white-on-white asylum? We end up being taken in by the visuals of the film rather than engaged by the suspense.

Thomas Harris’s books are superb thrillers but their film adaptations have worked variably – most disappointingly the overrated The Silence of the Lambs. Manhunter at least treats its source better than Ted Tally’s mangling of Silence of the Lambs did, although at times seems like a series of loose and unconnected incidents from the book. Here the character of Francis Dollarhyde is a complete blank – there is no explanation given as to the significance of the teeth or his cleft palate (which makes Reba’s comment about his avoiding speaking in sibilants meaningless). As a result, one never understands the appeal of the Reba/Dollarhyde relationship. The symbolic significance of William Blake’s Red Dragon painting has been entirely thrown out (although the death of Dollarhyde is a intriguing shot, showing the blood spread out under the body just like the wings of the demon in the Blake painting).

There are moments when the plot shines through enough to be captivating – the breathtaking cool of the scene where Lecter/Lecktor uses a phone to find out Graham’s home number, or seeing the FBI forensics departments in action and their leaps of ingenuity. The scenes with documents department analysing the letter, drenched in Michael Mann’s washes of pure primary colour, seem so unworldly as to almost be science-fictional.

When you watch Manhunter after having seen The Silence of the Lambs, Brian Cox’s English-voiced Lecter/Lecktor makes for a jarringly thuggish portrayal of the role, one that is diametrically opposed to Anthony Hopkins’s performance. (Although to be fair to the film, it does have a body of proponents who argue that Brian Cox’s performance is the superior one). Tom Noonan gives another of his creepily weird performances as Dollarhyde.

William Petersen is one good part about the film, his slightly blank looks and designer stubble providing a fine portrait of a man bending under the pressure of the areas he must travel into. In subsequent years, Petersen gained fame as the lead forensic investigator in tv’s CSI: Crime Scene Investigation (2000-15). The interesting piece of trivia about Manhunter is that it also casts William Petersen as a forensic profiler – in fact, Manhunter was the very first work to depict forensic profiling on film.

Manhunter was not a great success and as a result producer Dino De Laurentiis waived the opportunity to buy the rights to Harris next book – The Silence of the Lambs (1988) – a decision he must have kicked himself for later. However, De Laurentiis did produce the subsequent Hannibal Lecter cinematic outing Hannibal (2001). Following the success of Hannibal, De Laurentiis then went and remade Manhunter as Red Dragon (2002), this time starring Anthony Hopkins and more prominently highlighting the character of Lecter. De Laurentiis also made a further Hannibal Lecter film with Hannibal Rising (2007).

Manhunter/Red Dragon also became the basis of the tv series Hannibal (2013-5) starring Mads Mikkelsen in the title role and featuring Hugh Dancy as Will Graham, which extensively elaborated out the backstory that formed the basis of this film. The story of Francis Dolarhyde (played by Richard Armitage) was eventually retold towards the end of the third season. This remains the best of the Hannibal Lecter screen works to date. There was also the subsequent tv series Clarice (2021) telling the further adventures of Clarice Starling (Rebecca Breeds).