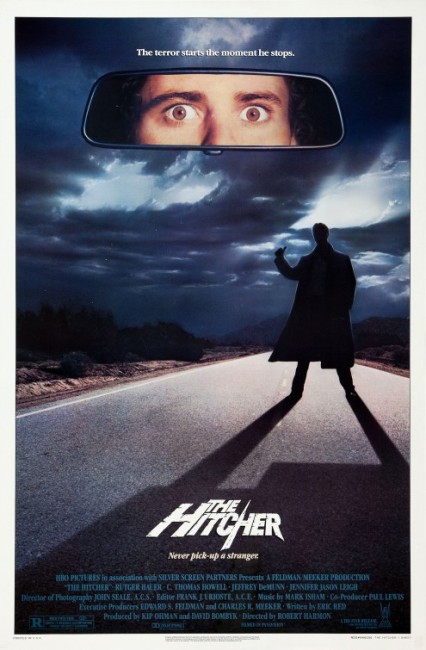 Jim Halsey is driving a car along the interstate between Chicago and California on behalf of a rental company. He is having difficulty staying awake and stops to pick up a hitchhiker for company. However, once in the car, the hitcher John Ryder pulls a switchblade and tells Jim that he is going to kill him. Jim is able to push Ryder out of the car. Jim drives on, only to see Ryder picked up by a family. He tries to alert them but is too late. Ryder continues to play games with him. However, when Jim tries to notify the state police, he is instead arrested for Ryder’s spree of killings. Ryder then walks into the police station, killing all of the police and freeing Jim. Ryder then follows, playing a psychological cat-and-mouse game, taunting Jim, killing everyone around him and undermining every hope he tries to find.

The Hitcher was the best psychological terror film of at least the 1980s. One of the great crimes has been how critically overlooked The Hitcher was both at the time and since in the annals of genre history. There are few films that succeed in working at one with such relentless tension and unease. The Hitcher is a film that conjures a state of absolute dread – director Robert Harmon lets us first imagine the worst he could possibly do and then methodically proceeds to deliver it. There is one superlative moment where C. Thomas Howell raises what he thinks is a French Fry to his mouth and the camera lingers on it in medium angle, just long enough to let the audience realize before Howell does that it is a severed human finger. This is what psychological horror should be all about.

Like all good horror, The Hitcher starts with a picture of wholesome normality and an average everyman character whose world is suddenly overturned and they catapulted into a nightmare. It is the same jolt inversion that runs through classics like Psycho (1960), The Birds (1963), Night of the Living Dead (1968), Duel (1971) (a film that has many similarities to The Hitcher with its plot about an ordinary man being taunted on a desert highway by a mysterious truck), The Texas Chain Saw Massacre (1974) and Jaws (1975).

The only motivation Rutger Hauer’s psychopathic hitcher ever offers is to tell C. Thomas Howell “You’re a smart kid – you work it out.” Of course, Howell never does, making The Hitcher into a work of existential horror – a la The Birds, Night of the Living Dead, Duel and Texas Chain Saw – films that are concentrated into remarkably brutal assaults that float disturbingly free of reason or apparent cause. Although, a line where C. Thomas Howell jokes “My mother told me to never do this,” as he initially opens the door to Rutger Hauer momentarily suggests that The Hitcher could be some type of monumental Oedipal black joke.

The Hitcher has the dream logic of a nightmare. The attacks on C. Thomas Howell come bereft of any raison d’etre. The film is one long extended nightmare as Robert Harmon undermines C. Thomas Howell’s every illusion of security – Howell wields a gun against Rutger Hauer in a cafe but Hauer tells him it isn’t loaded and produces the bullets to prove it; rather than being there to help, the police instead become convinced that Howell is the killer and mobilize all their forces against him; not even a deserved moment of exhausted sanctuary in a motel room or the security provided by being locked up in a jail cell is allowed. The tension throughout is utterly relentless.

The film a sublimely calculated piece of filmmaking. Robert Harmon has a fluid mastery of photography and editing that is quite extraordinary. The slow-motion sequence where C. Thomas Howell runs to escape as Rutger Hauer drops a lit match into a pool of spreading petrol at a gas station is seat-edge material. The cop car chase, which turns into a stunning slow-motion ballet of crashing vehicles, is one of the most amazing screen pileups ever staged and absolutely devastating in impact.

The Hitcher is a film that needs to be seen on the widescreen for full impact. The jolts, twists and unexpected turns offered at every opportunity are the work of a master filmmaker. The scene where Harmon has Rutger Hauer tie Jennifer Jason Leigh between a truck and detached semi-trailer and challenges C. Thomas Howell to shoot him to stop him otherwise he will let the clutch out is a genuinely harrowing scene and one that plays against every convention the heroine has in a film – even if Robert Harmon does eventually exhibit perhaps a little too much good taste and not show the outcome of the scene.

There have been several purported sequels to The Hitcher. Hourglass (1995), directed by and starring C. Thomas Howell, was passed off as a sequel, The Hitcher 2, although is a tawdry psycho-sexual thriller unrelated in any way and does not even feature any hitchers. The Italian film Fear in the Dark (1989) from Umberto Lenzi was also released as The Hitcher 2.

Subsequent to The Hitcher, one of the great mysteries of filmdom has been “What ever happened to Robert Harmon?” Harmon went onto to direct the insipid John Travolta vehicle Eyes of an Angel (1991) about a man and his dog pursued by the mob and the Jean-Claude Van Damme vehicle Nowhere to Run (1990), then lapsed into the tv wasteland. His most recent genre outing was the tepid horror film They (2002) and a further serial killer road movie with Highwaymen (2003), followed by a long lull in the tv movie wasteland.

The film’s screenwriter Eric Red went onto a more substantial directorial career than Robert Harmon ever did. Red next tuned the script for the excellent modern day vampire film Near Dark (1987) and the psycho-thriller Blue Steel (1990), both for Kathryn Bigelow. Red made his directorial debut with the fine thriller Cohen and Tate (1989) about two hit men, which has some similarities to The Hitcher, and then went onto the likes of the disembodied limbs film Body Parts (1991), the werewolf film Bad Moon (1996), the thriller Undertow (1996), the ghost story 100 Feet (2008) and the killer dog film Night of the Wild (2015).