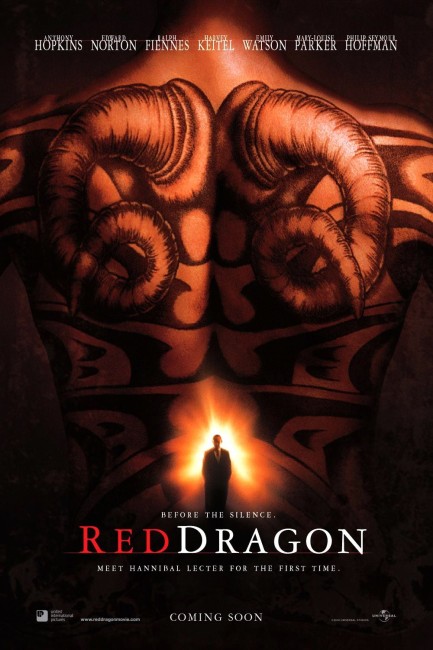 In 1980, while consulting with the brilliant psychologist Dr Hannibal Lecter on the case of a serial killer who appears to be eating the body parts of his victims, FBI agent Will Graham makes the realization that Lecter himself is the killer. Lecter stabs him but Graham manages to apprehend Lecter. The experience leaves Graham burned out and he retires to Florida following Lecter’s sentencing to an insane asylum. Several years later, FBI director Jack Crawford persuades Graham to come out of retirement to deal with a new serial killer nicknamed The Tooth Fairy who is systematically slaughtering entire families. Baffled by the case, Graham’s only recourse is to confront his greatest fear by going and asking the expert opinion of Lecter. As Graham becomes wound up in Lecter’s psychological games, the FBI discovers that Lecter and the Tooth Fairy have been communicating.

The relationship between producer Dino De Laurentiis and author Thomas Harris is a complicated one. Thomas Harris first published his second novel Red Dragon (1981), whereupon the rights to the book were snapped up De Laurentiis and it was filmed by Michael Mann as Manhunter (1986). Manhunter was not a success, largely due to being caught up in the financial collapse of De Laurentiis’s DEG studio – indeed Anthony Hopkins’s salary on Red Dragon was higher than the entire domestic earnings of Manhunter – although the film did gain an acclaimed afterlife on video. Due to the lack of Manhunter‘s success, Dino De Laurentiis declined the chance to option Thomas Harris’s next novel – a small work called The Silence of the Lambs (1988).

The rights to The Silence of the Lambs were then snapped up and it filmed by Jonathan Demme as The Silence of the Lambs (1991), which of course became a worldwide sensation. Thomas Harris next returned to the Hannibal Lecter saga with the novel Hannibal (1999). Dino De Laurentiis was at the head of the queue of people bidding for the film rights to Hannibal and won out due to his prior association with Harris. The results emerged as Hannibal (2001) with Ridley Scott at the helm. Hannibal was generally agreed upon as being a disappointment, although the film was still a huge box-office success. Rather than wait for Thomas Harris to take the decade he usually does to complete a novel before making a further sequel, De Laurentiis then resourcefully announced he would be returning to the Hannibal Lecter saga by going back and remaking Manhunter, which emerged here as Red Dragon.

With Red Dragon, Dino De Laurentiis brings back Anthony Hopkins – the film would hardly have survived without him – as well as, somewhat depressingly, The Silence of the Lambs‘s Ted Tally on script, and also Anthony Heald and Frankie Faison reprising their roles from The Silence of the Lambs. The new director to the show is Brett Ratner. Ratner began as a music video director and his previous output has not been exactly inspiring when it comes to horror – the entirely throwaway likes of Rush Hour (1998), Rush Hour 2 (2001), Rush Hour 3 (2007), Tower Heist (2011), the alternate life pathways fantasy The Family Man (2000), as well as the subsequent controversy laden X-Men: The Last Stand (2006) and the empty-headed Hercules (2014).

Red Dragon makes for interesting comparison to Manhunter. Most noticeable is the stylistic difference between the two directors. Michael Mann directed in vast washes of pastel colour and synthesizer sound, whereas Brett Ratner directs with a relatively more low-key realism. The Florida scenes in Manhunter, for instance, came set in a bedroom with a huge bay window looking out at the ocean all suffused in pastel blue light; the equivalent scene in Red Dragon is set on the beach, which makes for pretty background but comes without any predominating colour tone.

Red Dragon certainly brings out many aspects of the book that Manhunter trimmed. It gives more time over to Dollarhyde and brings out the titular motif of the William Blake Red Dragon painting that Michael Mann entirely threw out. Red Dragon also retains Thomas Harris’s false ending where people think Dollarhyde is dead, only for him to turn up at Graham’s house. Brett Ratner does retain one scene from Manhunter that is not in the book – where Dollarhyde takes Reba to a zoo and allows her to enjoy the tactile sensation of touching a tranquilized tiger.

Most noticeably though this is an adaptation of Red Dragon that has been rewritten subsequent to the film version of Silence of the Lambs. Silence of the Lambs of course made a cult presence out of Anthony Hopkins’s demoniac Lecter. Though Thomas Harris did introduce Lecter in Red Dragon, Lecter is a relatively peripheral character in the book. In fact, Lecter only appears in two scenes in the book. By contrast, the film has pumped Lecter’s presence up to the point that he is the central character in the film – indeed Lecter is a stronger character here than Will Graham, the hero of the novel. There is the sense that Ted Tally is trying to slavishly emulate Silence of the Lambs in having Lecter play the same sort of cat-and-mouse games with Will Graham about what it is that he knows, exchanging information tit-for-tat. That aspect was never there in the novel – Lecter’s involvement was only as the recipient of the Dollarhyde fan mail. Ted Tally has also expanded the book out to create a partial Hannibal Lecter origin story.

The upshot of this is that Will Graham is marginalised and pushed to the sideline as a character. In the book, Graham was a brilliant forensic profiler who was burned out as a result of travelling too deep inside the minds of the disturbed personalities he profiled. The character became the model for other profilers who were fraying because they were coming too close to their work in the likes of Copycat (1995) and tv shows such as Millennium (1996-9) and Profiler (1996-2000). However, the way Ted Tally writes it, Will Graham seems little more than an FBI plodder, rarely ever a brilliant profiler. In needing to make Hannibal Lecter a more central character, the film has Lecter rather than Will Graham make most of the breakthroughs in tracking Dollarhyde. Rather than burning out because he has begun to identify too closely with his work, all Graham does here is take early retirement after Lecter stabs him.

Furthermore, Graham is miscast with Edward Norton. Don’t get me wrong – I think Edward Norton is a fine actor – see the likes of Primal Fear (1996) or Fight Club (1999). However, when he lacks a part that he can embellish with inner intellectual strength, Norton comes only across as weedy and whiny. Here it is hard to buy him as an FBI agent – he lacks the physique for the part and seems more like a college kid just come onto the job.

While Silence of the Lambs created a public fascination with forensic psychology and serial killer profiling, the irony of Ted Tally’s scripts for the Hannibal Lecter films is that he is almost entirely disinterested in the forensic psychology aspect of either of Thomas Harris’s books. In both cases, when it comes to portraying the two killers in the books, Jame Gumb in The Silence of the Lambs, Francis Dollarhyde here, Tally has thrown out all the painstaking conviction that Thomas Harris devotes to explaining their psychology. Certainly, Dollarhyde here is a much better developed character than Gumb was in Silence of the Lambs – Tally makes the strength of Red Dragon the well developed romance between Dollarhyde and Reba (a fine performance from Emily Watson).

However, the film’s Dollarhyde exists in a vacuum psychologically. There is a brief voiceover about his grandmother abusing him and a glimpse inside his journal at the end with vague mention of systematic abuse, but that is the only depth the character gets. While the film’s Dollarhyde has a cleft palate, its importance to his fractured psychology is never made apparent. We get to see him placing in the false teeth but we never learn their significance, or even the fact that he uses them to bite his victims. And while the motif of Blake’s Red Dragon painting is used throughout the film, it is never made clear that this represents a symbol of god-like transformation for Dollarhyde.

Ted Tally is a disappointingly poor scriptwriter – for all that he was celebrated for his work on Silence of the Lambs, his success came from climbing on Thomas Harris’s shoulders and what did work about Silence of the Lambs was where he simply copied direct from Harris. He has improved somewhat here – the embellished Lecter scenes work well. Yet Red Dragon is at its best when Tally is sticking close to Harris – the gripping scenes with Lecter obtaining Will Graham’s home address, the discovery of the message from Dollarhyde, the Reba relationship. Red Dragon tends to go under when Ted Tally is left to improvise on his own – like the embarrassingly bad confrontation scene at the end where Will Graham overcomes Dollarhyde by calling his son names.

For all that, Red Dragon is a passable film. The Lecter embellishments work not too badly and Brett Ratner delivers the film with a suspenseful grip. Ratner and Ted Tally bring out the character of Dollarhyde, if not terms of psychology, certainly as a presence, one where the scenes with Reba are constantly sitting on an edge of unease. Personally, I liked Red Dragon better than I did the completely overrated The Silence of the Lambs.

Subsequent to Red Dragon, Dino De Laurentiis and Thomas Harris collaborated on a further Hannibal Lecter prequel with Hannibal Rising (2007). Subsequently, Red Dragon also became the basis of the extraordinary tv series Hannibal (2013-5) starring Mads Mikkelsen in the title role and featuring Hugh Dancy as Will Graham, which is the finest incarnation of Hannibal Lecter to date. The series mostly concerns itself with the relationship between Will Graham and Hannibal Lecter, while story of Francis Dolarhyde (played by Richard Armitage) that we have here was finally introduced towards the end of the third season. There was also the tv series Clarice (2021) telling the further adventures of Clarice Starling (Rebecca Breeds).

(Nominee for Best Supporting Actress (Emily Watson) at this site’s Best of 2002 Awards).