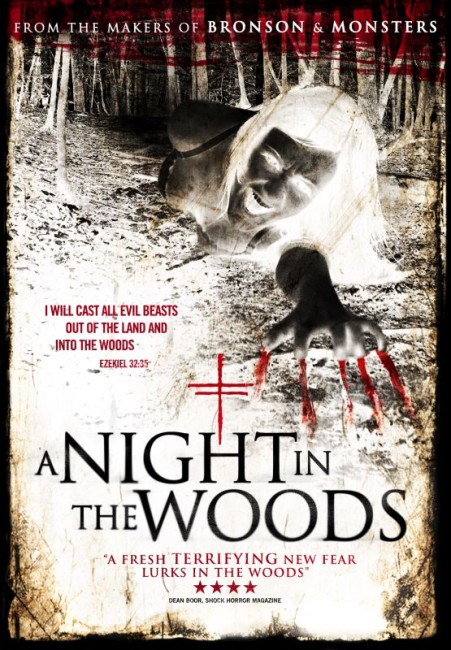 Kerry Hastings and her boyfriend Brody Cartwright, an American living in England, head out for a tramping trip on the Dartmoor moors. Kerry has invited along her cousin Leo. The locals warn them of the legend of the mythic figure of The Hunter that prowls the moors. However, once out on the moors, tensions grow between the three as it becomes apparent that each of them is holding secrets.

The Blair Witch Project (1999) was an enormously influential film. It created the Found Footage genre and afterwards there was an explosion of films using the same raggedy handheld shot-on-camcorder look. An even bigger boost to the genre came a few years later with Paranormal Activity (2007). Most of the films that came after these were sufficiently inventive to vary the basics and we had Found Footage variations on everything from the ghost story to the Frankenstein and vampire film to the monster movie, superhero and alien invasion film. There were still several that just copied the Blair Witch basics of people running around the woods as in the likes of Nightlight (2015), The Devil Complex (2016) and Moth (2016) – you would have to include A Night in the Woods here.

A capsule description of A Night in the Woods might to be call it a British version of The Blair Witch Project. There is the same essential plot of three people going tramping in the woods. There is the suggestion of something supernatural – rather than a witch, a legend known as The Hunter that purportedly haunts the area. This is something that may be manifest at the climax and possessing various members of the party – although it should also be said that the horror elements here are more psychological in nature than they were in Blair Witch.

The most noticeable difference is that the title A Night in the Woods is not strictly accurate. The film has been relocated on what is surely the British equivalent of the American backwoods – the moors of Dartmoor (a location that Arthur Conan Doyle also used in his Sherlock Holmes story The Hound of the Baskervilles (1902), which he saw as desolate and had haunted by a ghostly hound). There are a few brief scenes of the characters wandering through some wooded areas but mostly the terrain is the wide-open landscape of the moors. But then I suppose that A Night on the Moors doesn’t parse as effectively as the title for a horror film.

A Night in the Woods is a fairly low key entry, The moor locations are well photographed, which must be a first to say for a Found footage film (which usually delights in the opposite). An interesting level of tension is maintained by having all three characters reveal secrets about who they are or why they are there throughout the course of the show. The journey there and build-up is oddly the most interesting part of the show, whereas when the film arrives at the bulk of its horror element in the latter third, Richard Parry only dips into a well-used bag of Found Footage tricks.

This must be surely the only Found Footage film to feature recognisable stars – most notedly imported American Scoot McNairy who had just come to fame the previous year in Monsters (2010), as well as Anna Skellern, an Australian actress who was just starting to gain a name around this time.

A Night in the Woods comes from British documentary director Richard Parry. Parry has done assorted documentary work for tv, including stints as a cameraman in the Bosnian war, and made a couple of other non-genre fiction films with South West 9 (2001) and Base (2017).