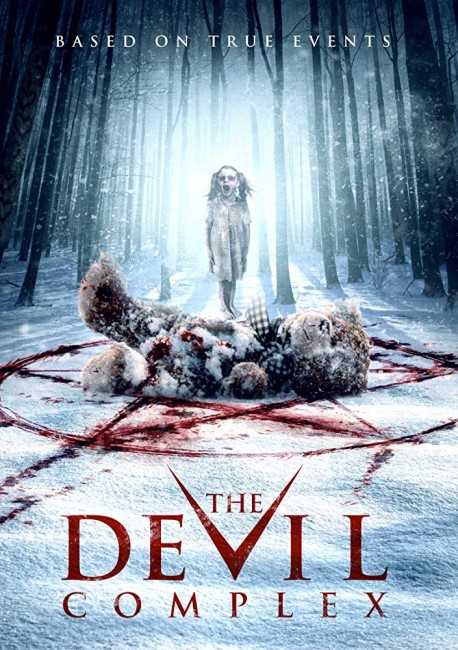 aka The Devil Within; The Devil’s Garden

Following the suicide of Howard Redman, a professor in London, a video from one of his students, Rachel Kasza, is found among his possessions. The video was made by Rachel and two camera crew as they set out to explore the Hoia Baciu forest in Romania. In the film, they interviewed locals, learning of the forest’s supposedly haunted nature. As the three ventured into the forest, they were abandoned by their guide whereupon sinister things began to happen.

The Devil Complex, also known under several different names, is a directorial debut for British filmmaker Mark Evans. Evans had previously produced a handful of films with Gangsters, Guns and Zombies (2012), Ashens and the Quest for the Gamechild (2013) and Run Away With Me (2015). He has apparently travelled to Romania to shoot the film in the real-life Hoia Baciu forest, located about eight miles west of Cluj-Napoca (and naturally enough in the heart of Transylvania). The forest does have a reputation for supernatural and UFO phenomena, although apparently not to the extent that it has stopped the locals from promoting it as a tourist destination.

Mark Evans is making a Found Footage film – and clearly on the cheap. The entire film has been set outdoors (apart from a couple of indoor interview scenes with the two professors). Evans has employed Romanian actors to play the camera crew (although it is never clear if Maria Simona Arsu, who is a Romanian actress in actuality, is meant to be a British student or a local). Apart from the interviews with people in the streets, the entire film has been shot with the three of them wandering around the woods.

This set up makes The Devil Complex no more than an obvious copy of The Blair Witch Project (1999). Evans has done little to vary the formula – the trio consisting of one girl and two guys in the woods with a haunted reputation documenting their journey with videocameras; their increasing desperation as they become lost; even fearful, panicked scenes in a tent. Where the film does work best is less the scenes in the forest than during the first twenty minutes where we get a series of vox populi interviews with various Romanian locals (it is never clear if these are real street interviews or actors) and they tell stories of the spooky phenomena associated with Hoia Baciu Forest. These do a fantastic job of creating the expectation of something eerie and otherworldly.

The main problem is the massive letdown of when we actually get into the forest. Thereafter the film becomes about the three trudging around the woods in the snow. That is about it. Towards the end, we get a couple of deaths and lots of shakycam and yelling that is supposed to indicate panic, before the camera abruptly goes dead (the only ending that Found Footage horror films seem to have).