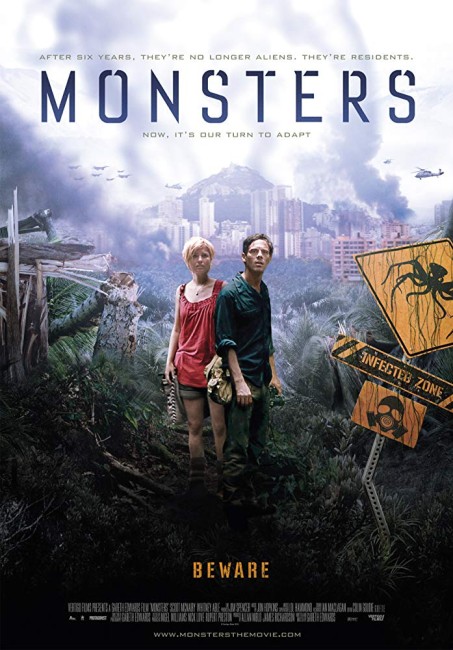 Six years ago, alien life was discovered in the Solar System. However, a NASA probe returning with samples crashed over Mexico and now half the country has been turned into an infection zone by the US military. Photojournalist Andrew Kaulder is in San Jose, Mexico when he receives orders to divert to the hospital to pick up Samantha Wynden, the daughter of his news agency’s owner, and escort her to safety at the coast. Andrew reluctantly does so, abandoning the opportunity to shoot photos of the disaster area. They set out to the coast, having to pay an exorbitant amount to get aboard the ferry – only for their passports to be stolen by a girl that Andrew spends the night with. They are then forced to make a dangerous trek through the infection zone to get to the border, which involves a journey by boat and vehicle through territory inhabited by unearthly giant-sized monsters.

Monsters created a buzz around various film festivals after its premiere in mid-2010. It was the work of British director Gareth Edwards who handles fairly much every job behind the camera. Edwards started out as a filmmaker but soon developed an interest in visual effects, teaching himself how to create these on his roommate’s home computer. He was then employed at the BBC to provide effects for documentary recreation series and tv movies such as Seven Wonders of the Industrial World (2003), Hiroshima (2005) and Space Race (2005), as well as the film In the Shadow of the Moon (2007). Edwards’ most notable work here was with the tv movie End Day (2005) and the tv series Perfect Disaster (2006), of which he also directed two episodes, both of which created a series of speculative scenarios for global catastrophes.

Gareth Edwards shot Monsters on no more than a $14,000 budget with purportedly only a two-man crew. The visual effects, which are far superior and more flawlessly integrated than in many films with $100 million + budgets, were all created on his home computer. He shot the film on location in Mexico and Costa Rica with the two cast members where there was often no script and the actors improvised their own dialogue. Often it was a case of they touring about by bus and stopping off whenever Edwards found an interesting location and he shooting Scoot McNairy and Whitney Able as they interacted with the locals.

The result is an amazing work that steps well outside of any cliched monster movie treatment. The capsule description I coined as I was watching was “Cloverfield (2008) by way of Stalker (1979)” – after Cloverfield which shot a monster movie with ragged handheld camerawork and had a relationship story happening in between the action, and Andrei Tarkovsky’s masterpiece Stalker about a group of people traversing a mysterious alien zone where terrestrial rules no longer apply. The latter third of the film also suggests something of the final sections of The Mist (2007) – in particular, the scenes where the party set out into the mist and encounter giant leviathans striding across a now wholly alien landscape. The description that Gareth Edwards coined was “Lost in Translation (2003) meets War of the Worlds (2005)”, which works equally as well.

Gareth Edwards spends much time immersing us in the alienness of the landscape he has created. The background of the film is constantly littered with images of wrecked tanks and airplanes – even shots of locals driving by with carts hauling the engines of fighter planes as scrap metal. The visual effects here are flawlessly integrated such that you wonder for some time whether these are real wrecks that Edwards came across and filmed, and then think they cannot possibly be.

You realise when you read about the method whereby the film was made that other images like the border walls and giant fences partitioning off the infection zones, the ever-present copters and fighter planes overhead, not to mention the maps and signs littered across the landscape must all have been digitally inserted. You can see just what an enormous task Gareth Edwards has conducted (apparently singlehandedly), not to mention the seamless integration of these shots into the filmed footage such that it is impossible to tell what is real and what is not. The photography is amazingly good for a film that was essentially shot with one digital camera, next-to-no budget and on the fly.

Gareth Edwards is surprisingly sparing when it comes to revealing the title monsters. There is one scene that opens the film shot in infra-red light and handheld shakycam where the military prowl through the streets in an APC and start shooting as a giant-sized monster appears over the tops of buildings. However, this is all that we see of any monsters for over the next hour of the film. You get the feeling that maybe this scene was insisted on by the producers in order to give the audiences something at the outset.

When we do get to the monsters, their appearances are something amazing and awe-filled – where a giant fin appears to be coming towards the boat before this is seen to be wrapped in a tentacle and the monster turns over in the water and reveals that it is holding an entire fighter plane in its grasp and then equally quickly disappears underwater again. In coming so completely out of the blue, the effect is genuinely out of this world.

Other appearances equally amaze – the revelation of the glowing sacs attached to the trees; the scene where the journey by vehicle is abruptly interrupted by a giant leviathan appearing out of the mist and picking up and crushing the lead truck. The most amazing scene is the one that takes place at the climax where we see the two monsters coming together – to say more would spoil the effect, it is something that takes place wholly in terms of the alien beauty of the scene.

The film is largely a character driven drama, of the relationship that develops between two people on a road journey. This is well drawn by Gareth Edwards and his cast. Scoot McNairy holds the show with a wryly naturalistic performance, none the more so than the scenes where he is drunkenly trying to come onto Whitney Able. Hers is a much quieter, shyer performance but she emerges well. Unlike say Cloverfield and its central romance where you could not have cared less about the people after the show ends, this is a film where you engage with the characters and their journey. The film works through their rapport and in the ability of Gareth Edwards to get them to often hauntingly reflect on the alien world around them – there is a beautiful scene where they spend the night on the pyramid in view of the border wall and reflect on looking in on their own world from the outside and the lack of any artificial lights anywhere around them. Both Scoot McNairy and Whitney Able (who are married in real life) seem to be actors on the rise and Monsters gives all appearance of being a moment where both suddenly become visible to the public. Though most of the other cast appear to be people recruited on the spot, there is a wonderful performance of blithe mercenary charm from Mario Zuniga Benavides as a ticket seller at the ferry terminal.

Monsters: Dark Continent (2014) was a sequel that takes place in the Middle East.

Gareth Edwards subsequently went on to conduct the remake of Godzilla (2014) and the Star Wars prequel Rogue One (2016).