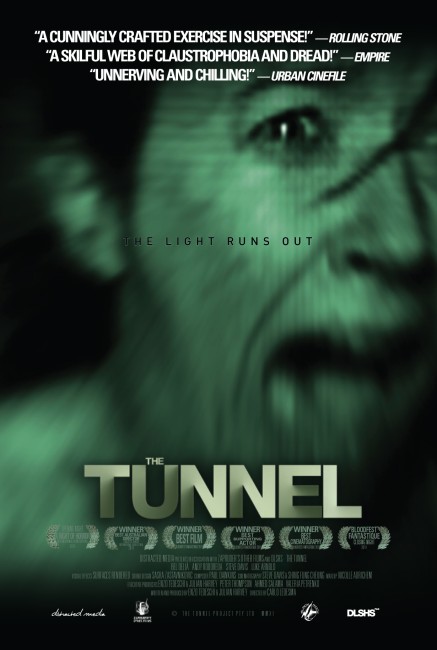 The documentation of an incident that occurred in Sydney, Australia in October, 2007. The government had announced plans to open up a water treatment plant that tapped sources of water in the disused tunnels beneath the city. The plan was then quietly dropped. TV reporter Natasha Warner was determined to find out why and began to turn up rumours of the homeless living down in the tunnels going missing. She gathered a camera crew to go down into the tunnels, venturing down despite being refused official permission. As they began filming, they were then stalked and attacked by mysterious creatures that lived in the dark.

The Tunnel is a Found Footage horror film from Australia. If you want a capsule summation it could be one of the horror films set in an underground railway station such as Death Line/Raw Meat (1972) and Creep (2004) or a potholers encounter monsters film like The Boogens (1981), The Cave (2005), The Cavern/Within (2005), The Descent (2005) or Caved In (2006) having been reworked as a found footage film. As such, The Tunnel rapidly falls into a predictability for the genre. The scenes of the build-up, the exploration of the labyrinths of tunnels, the wondering what is going on as things start to go wrong and the arrival at all-out nightmare have an over-familiarity to them by now. They are all tried and true elements of this type of film from Blair Witch on.

Unfortunately, The Tunnel does little to distinguish itself as any different from the abovementioned. As with most of the Found Footage horror films, it suffers from the principal credibility flaw of leaving you wondering why anybody in their sane mind would continue to hang around to film what is going on rather than fleeing as quickly as possible once their lives are in danger.

The main problem I had with The Tunnel is that is has a very slow build-up. It is some 40 minutes before we get down into the tunnels, which is taken up with a good deal of talking heads discussion alluding to what happened, the group’s motivation for wanting to make the tv special, analysis of the various friendships and working styles of the people within the group. There is backstory about how Bel Delia must disappoint Peter and tell him that he has been reassigned from a piece he was looking forward to shooting in China, as well as the suggestion that there is some type of relationship between the two – however, as the film gets underway we find that none of this has any bearing on what follows. By contrast, a film like [Rec] got into the thick and fast of it within the first ten minutes with a minimum of backstory and never lets up from that point.

Even after that point here, the action is still broken up by more in the way of talking heads shots appearing to overanalyse the minutiae of every decision and what people were thinking as things happened. It feels like it takes a long time to get to the essence of the scenario – and once there, director Carlo Ledesma produces one or two jumps but no nerve-wracking tension or anything that propels us out of our seats. The film even arrives at its end never having told us anything about the creatures – what they are or why they are down in the tunnels.