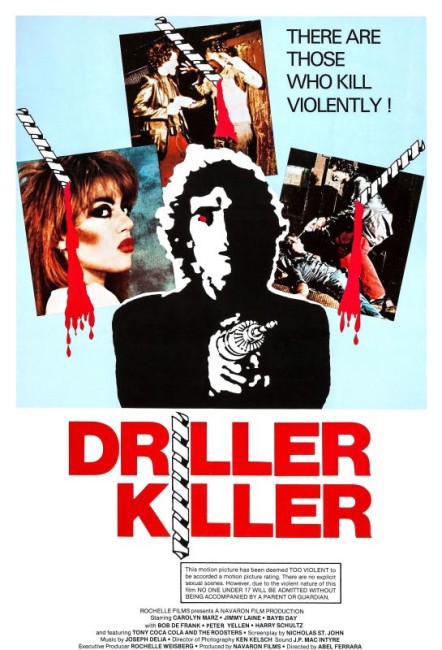 Reno Miller, an artist in New York City, is being driven crazy by the pressures around him created by mounting bills and the rock band that move in next door and keep him up to all times of night with their practice sessions. He starts to release the pressure by going and out and randomly killing people in the streets using an electric power drill.

The Driller Killer is a film that has developed a considerable notoriety. It seems to have been intended as little more than a Times Square exploitation film. Its notoriety grew when it was labelled a Video Nasty and banned in several countries. Even in the countries where it was not banned, it was unavailable on video for many years, which only served to increase its notoriety. The reputation that centred around the film regarded it as sadistic and nastily exploitative. However, this notoriety was something that only grew second-hand – one laboured for years to find primary source material written by someone who had actually reviewed the film when it came out, for instance. However, in the early 1990s a funny thing happened and – director Abel Ferrara began to develop a reputation as a strong and uncompromising director with the likes of The King of New York (1990), Bad Lieutenant (1992) and several genre entries that are listed below. Ferrara’s early effort, the sharp and striking rape/revenge drama Ms 45/Angel of Vengeance (1981) was rediscovered and suddenly people began to consider that The Driller Killer might have had more worth than it was initially dismissed with. It makes for interesting modern re-viewing.

Abel Ferrara taps into the same restless urban psychosis that Martin Scorsese did in Taxi Driver (1976). Ferrara’s Reno and Robert De Niro’s Travis Bickle are remarkably similar characters – they are loner individuals living in New York City driven by a restless inability to sleep and are eventually compressed inward by the forces of the world around them to the point that they explode into violent release. Neither film offers any psychological insight into why their protagonists happen to snap; there is just the sense that they are a pot suddenly blowing its top after being brought to boiling point by urban pressure. In Taxi Driver, the pressures were a sense of almost apocalyptic moral degeneracy; while here it seems to be the struggles of an artist confronting poverty, mounting bills, fickle sponsors and the persistent irritation of a band practicing next door all night.

All of Abel Ferrara’s later films tap into the same sense of grim urban nightmare, of characters being crushed and overwhelmed by the moral decay of the world surrounding them. These themes are most evident in The Addiction (1995) where Lily Taylor’s becoming a vampire becomes an overwhelming insight into the true nature of human evil; and the stunning Bad Lieutenant, which offers a devastatingly seedy portrait of a corrupt, morally dissolute cop in a world that seems to have gone to Hell. In both of these later films, Abel Ferrara would discover and reach to Catholic redemption but that glimmer of hope is not present here. As a result, although his style is at this point unhoned, Ferrara creates a sense of overwhelmingly grim, grinding intensity.

Ferrara himself, with his lean frame, his long, almost prehensile jaw and shock of Afrod hair, gives a genuinely angry, seething performance as Reno. There is a considerable nastiness to the scenes of him attacking people at random in the streets with his power drill. It is a performance that convinces you that The Driller Killer is expressing something more than a little personal upon Ferrara’s part.

As part of the cycle of modern remakes of 70s/80s horror films, a remake of The Driller Killer was announced in 2007, although is yet to be greenlit.