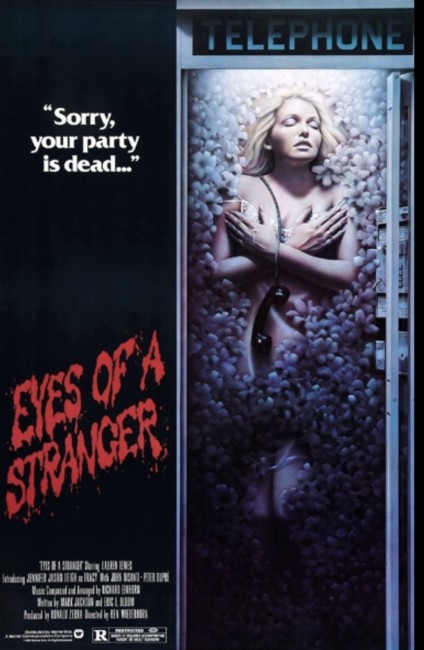 Miami is being terrorised by a killer who calls female victims on the phone and taunts them before breaking in and then raping and killing them. Television newscaster Jane Harris feels personally disturbed by the killings as her younger sister Tracy, whom she looks after, was attacked as a child and left catatonically mute and blind as a result. On air, she starts to obsess about the killer. Returning home, she witnesses Stanley Herbert, one of the neighbours in her apartment building, throwing out a bloodied shirt and believes that he might be the killer. Other pieces of evidence confirm her suspicions. She then begins to toy with Herbert – anonymously calling and saying that she knows about him. However, this backfires when he connects her anonymous voice with the one he sees on the tv screen and comes after her and Tracy.

Eyes of a Stranger was one of the host of slasher movies that came out following the success of Halloween (1978) and Friday the 13th (1980). The slasher film was a genre predicated on seeing teenagers (usually girls) being threatened by hulking figures hidden behind masks. Friday the 13th in particular had spun this out into a series of gore-drenched novelty despatches. Eyes of a Stranger also borrows from When a Stranger Calls (1979) – another key success in the slasher fad, even if it is generally forgotten nowadays – the motif of the killer being someone who taunts his victims via phone.

Amid the host of slasher films, Eyes of a Stranger was one of the more intelligent. For one, it actually had a plot. It has turned to an eminent source – Alfred Hitchcock’s Rear Widow (1954) and its plot of the voyeur who suspects that the person in the apartment opposite might be a murderer. John Di Santi’s killer even bears a strong physical resemblance to Raymond Burr, the killer in Rear Window. (Eyes of a Stranger was originally shot in 1979 as a more routine psycho-thriller but with the success of Friday the 13th was ordered back to reshoot more stalking scenes and add gore effects in order to pitch it as a slasher film).

There are a few other cliches thrown into the mix as well – the catatonically mute and blind victim who regains their senses just as they are being attacked a la The Spiral Staircase (1946); and the theme of the woman tv newscaster who becomes a focus of the stalker that was used in several other films around the same time – Someone’s Watching Me (1978), The Seduction (1982), Visiting Hours (1982).

Of course, director Ken Wiederhorn is no Alfred Hitchcock and, despite the eminent pedigree of its set-up, Eyes of a Stranger quickly descends to slasher movie set-ups, not to mention comes with a cliche slasher movie score run over everything. Friday the 13th‘s Tom Savini is employed to create the gore effects and provides the film’s schlockiest moment – the luridly entertaining moment where a victim’s boyfriend’s head turns up in a fish tank.

There are some suspenseful sequences – one scene where Lauren Tewes ventures into John Di Santi’s apartment, where he unexpectedly returns, senses something wrong and searches the apartment while she precariously hangs over the balcony by her fingertips. Wiederhorn mounts an effectively tense climax with John Di Santi entering the apartment and taunting the blind Jennifer Jason Leigh, moving away the plates and knives that she goes to pick up with her unable to see him there.

Eyes of a Stranger was notable at the time for starring Lauren Tewes, best known as a regular on tv’s The Love Boat (1977-86). She is okay in the part, which merely requires her to be blonde and determined, if never demonstrates to the world that she was a great actress. Subsequently, the film became known as being the earliest screen appearance of Jennifer Jason Leigh. Leigh, in fact, gives the best performance in the film as the blind mute girl.

You also cannot help but think that Eyes of a Stranger is one of the films that modern 2010s telecommunications advances would render obsolete – nobody has ever attempted to remake the film, for instance. Caller display would identify Lauren Tewes the moment she started calling to taunt the killer, while the killer’s use of phone boxes to call people is something that don’t seem to exist in cities anymore.