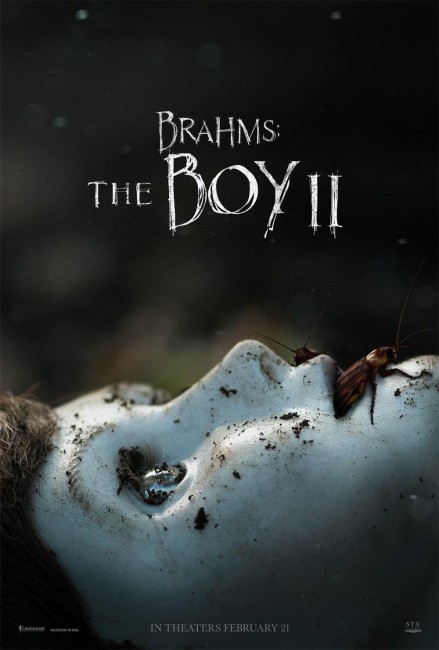 The American Liza lives in London with her husband Sean and their young son Jude. Their life is shattered as masked intruders break in and attack Liza. In the aftermath, Liza suffers post-traumatic flashbacks, while Sean has become an elective mute. In an effort to get past this, they move to the countryside, renting the cottage on the grounds of the Heelshires estate. Immediately upon arriving, Jude finds the doll Brahms buried in the woods and brings it home. After Brahms is cleaned up, Jude bonds with it and writes out a list of rules by which they must all abide. Liza finds that Jude’s attachment to Brahms is becoming troubling. She believes that the doll is moving of its own accord, although Sean dismisses this as part of her fragile mental state.

William Brent Bell is a director who has specialised in genre material. He first appeared on the genre scene with his second film Stay Alive (2006), which had the bizarre premise of Countess Bathory having been incarnated inside a videogame, and followed this with the Found Footage exorcism film The Devil Inside (2012), which proved a reasonable hit, and the werewolf film Wer (2013). He followed Brahms with the ghost story Separation (2021)

Bell has a success with The Boy (2016), which told the story of a governess finding that she had been hired to tend a doll that then appeared to be coming to life. The end revelation showed the doll to not be alive after all, rather that it was the disfigured and deranged son that the doll had been modelled on who was hiding in the walls of the mansion. Apparently the film’s success ($64 million box-office worldwide) was regarded as sufficient to produce this sequel. (Bell tells an amusing story of how the producers persuaded him to make a sequel after showing him that Brahms was being used in memes of Donald Trump’s son-in-law Jared Kushner).

Brahms is essentially The Boy all over again but where the elements are mixed in a slightly different way. As before, the story is about outsiders visiting the Heelshires estate and encountering the sinister doll. In both films, Bell depicts a setting in the English countryside but seems reticent about actually doing so. In both cases, the English countryside setting has actually been filmed in Canada and rather than having a central British character we see the action through the eyes of an American actress (even though in both cases the respective parts could have been cast with an English actress with no noticeable difference).

Original scriptwriter Stacey Menear is back and introduces some twists on the familiar. The nanny taking a job on the estate from the original is replaced by a new and potentially more interesting set of characters of a family where the wife (Katie Holmes) is someone suffering PTSD in the aftermath of a home invasion. This has also left the young son an elective mute whereupon he bonds with Brahms.

The biggest change is that Brahms goes from what he was in The Boy – simply a doll while the real figure was the deformed son of the family who hid inside the walls of the house – to somehow having gained life. The Brahms we have here still does a lot of sitting staring with sinister effect but there are also scenes where he is seen turning his head and moving his eyes and other scenes where he would appear to have moved positon and overturned a dining room table.

What one suspects has happened is that there was a push from the money people to expand The Boy into another franchise. It would be difficult to create more adventures of someone who hides inside the walls so the doll now becomes the continuing character. Moreover, it is brought to life in what has clearly been an effort to imitate the malevolent doll series of Annabelle (2014) and sequels. A whole backstory about its influence through the years has now been added – although making the doll go back much further in the past seems to contradict the first film where we were told that it was made in the likeness of Brahms Heelshire.

William Brent Bell is an unexceptional director. If I had to cite his best film, I’d say it was The Boy, which seemed perpetually on the edge of being a much more eerie and interesting film than it ended up being. By contrast, Brahms takes the same essential elements and does nothing with them except shuffle them through a series of cliches. There’s Katie Holmes – an actress who always seems capable of much better parts than she gets and here does a variation on the same role she played in Don’t Be Afraid of the Dark (2011) – who gets the cliche character arc of the wife whose certainty that something is going on is dismissed because of her fragile mental state. There’s the boy who won’t speak who forms an unnatural attachment to the doll; more scenes with the doll maybe or maybe not moving that we had in the first film; people – all of whom seem to have target stamped on their forehead – being killed because the doll doesn’t like them. There is nothing here that does not feel like a variation on what we have seen before, nothing that makes us tense up in our seats.