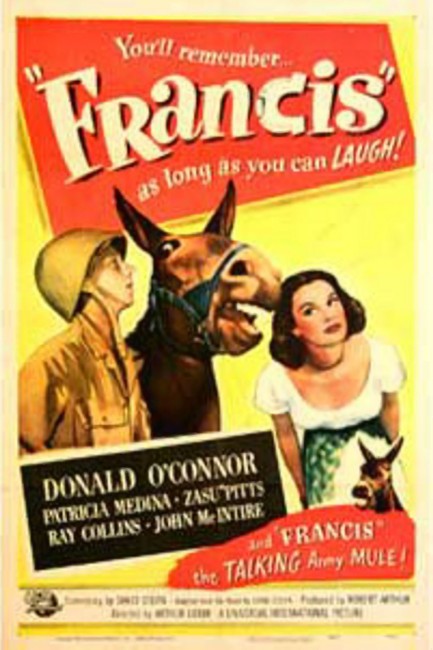 Bank clerk Peter Sterling is questioned by his superior and asked to explain certain rumours circulating about him. He relates what happened to him as an army lieutenant in Burma during the Second World War. Wounded in combat and lost in the jungle, he was saved by a talking mule named Francis. When he told others what happened, he was committed to the psych ward. Released and appointed to the intelligence division, he was again aided by Francis who provided him with information that allowed him to capture a Japanese outpost. However, his continued attempts to explain about Francis kept ending him back in the psych ward.

It is hard to think that a film about a talking horse would ever get people very excited. Nevertheless, Francis proved inexplicably popular when it came out, enough to inspire six sequels (see below) and imitators like the even more popular tv series Mr Ed (1961-6), even modern antecedents like the awful Hot to Trot (1988).

Francis is an incredibly lame effort. The plot is predictable and repetitive – it is only a one-gag film about people reacting to the idea of a talking mule. No explanation is given as to how Francis talks, what a mule with a Yankee drawl is doing in the Burmese jungle or even how it gets its information. Donald O’Connor gives one of the cringing underdog performances favoured of these types of films. Patricia Medina’s accent is atrocious.