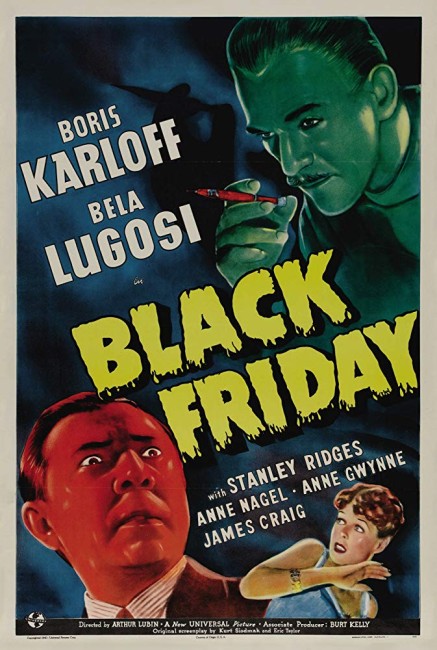 Brain surgeon Dr Ernst Sovac is about to go to the electric chair. Just before he is strapped in, he gives his story to a reporter. Reading it, the reporter learns how Sovac was present as his good friend, English professor George Kingsley, was fatally injured in a shootout between mobsters. Dying, mobster Red Cannon promised Sovac a split of his half-million dollar loot if he could save him, so Sovac transplanted Cannon’s brain into Kingsley’s dead body. After Cannon/Kingsley recovered, Sovac then took him to Cannon’s haunts in New York City in the hope of jogging Cannon’s personality to remember where the money was. Soon however the Cannon personality emerged and took over Kingsley’s body, determined to rub out the traitorous members of his former gang.

Black Friday comes from the great era of mad scientist films, the 1940s. It is generally considered marginally better than most of the poverty row films of its ilk that filled the screens at the time. It is of note because of its pairing of the two reigning horror greats of the era – Boris Karloff and Bela Lugosi, one of their eight such pairings together. (In actuality, the team-up is disappointing in that Bela Lugosi only has a minor role as a gangland hood, neither appear on screen together and the focus of the show is actually Stanley Ridges’s professor).

The film also has a script from the legendary B-movie hack, Curt/Kurt Siodmak, who also wrote (and occasionally directed) a number of B films from the era (see below). Siodmak would also go onto revisit the brain surgery and personality domination theme in his novel Donovan’s Brain (1943), thrice filmed as The Lady and the Monster (1944), Donovan’s Brain (1953) and Vengeance/The Brain (1962).

Black Friday is a peculiar mixture of gangster film and Dr Jekyll and Mr Hyde (wherein a brain transplant serves in place of a personality-transforming potion). Alas, Kurt Siodmak never makes it clear what is going on – if Boris Karloff simply transplanted Red Cannon’s brain into the professor’s body, why is there such a problem getting Ridges’s professor to recall Cannon’s memories? Why for that matter does Cannon’s brain possess the professor’s memories at all if the professor’s original brain has been removed? In the latter half of the film, the brain transplant aspect drops out almost altogether (the same structural problem that Donovan’s Brain also had) and the film becomes a routine mobster melodrama about a gangster eliminating his old gang and finding the loot.

On the plus side, Black Friday is slightly better directed than most other B movie mad scientist efforts of the era, with director Arthur Lubin, who also made the Claude Rains Phantom of the Opera (1943), making occasionally effective use of shadow contrast. There is one particularly good shot where we see the transformation between professor and gangster, where Stanley Ridges puts his head in his hands as the mousy professor and then suddenly brings his face up as a tough guy. (It is rather amusing to note that the transformation of personalities between professor and gangster also manages to somehow correct the professor’s eyesight, with he no longer needing glasses, and causes his hair to become slicked back every time). In fact, it is a better delineation of personality change than the one that occurred in the Spencer Tracy Dr Jekyll and Mr Hyde (1941) around the same time.