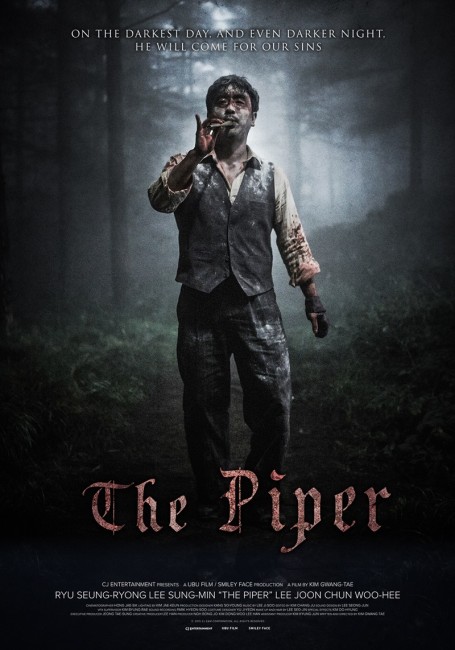 It is in the aftermath of the Korean War. A poor father wanders through the countryside with his son Young-nam. They come to a village and the father explains to the elder that he is travelling to Seoul to obtain medical help for his son’s tuberculosis and begs to stay one night. The village is plagued by a vicious horde of rats. The father offers a solution – using a mix of powders gathered from the woods and the music of his pipe, which can charm animals, he proposes to draw all of the rats away. The chief promises him the price of a cow if he can do so. During the preparations, the piper becomes attracted to the lovely Mi-sook, who has just been proclaimed the village’s new shaman by the chief, and tries to persuade her to come away with him. The piper is successful in creating a cloud of fumes and a trail of powders that draws the rats away to be sealed in a cave. However, when he goes to claim his payment, the villagers turn against him with the chief twisting things to suggest that he is a North Korean spy. He is denounced, his fingers severed and driven out. However, in doing so, the buried secrets of the villagers’ own past – how they drove away a colony of lepers who lived there and took over the village – rise up to exact a horrible retribution.

The Piper – to give the film the English name; the Korean translates as meaning The Guest – is a South Korean retelling of the legend of the Pied Piper. The film is a directorial debut for Kim Kwang-tae. The Piper was a complete unknown when I sat down to watch it at the Vancouver International Film Festival. It was a world premiere for the film so there was no advance word on it. Moreover, it was playing in the Dragons and Tigers (Asian cinema) section, whose programmer has a reputation for delivering some of the most pretentious, unwatchable and amateurish films. In sitting down to watch it, The Piper was a low-expectation venture that ended up contrarily ended up completely flooring me. For a film that is a directorial debut, it comes with a remarkable assurance in the use of the widescreen canvas.

The Pied Piper is a legend that goes back at least to the fourteenth Century. It first appeared on a stained glass window in a church in the German town of Hamelin (although this was destroyed in the 17th Century). The story, the most famous version of which was retold by the Brothers Grimm in 1816, concerns a pied piper (pied meaning multi-coloured clothing) who turns up in Hamelin and agrees to get rid of the rats that are plaguing the townspeople. Drawing them away with his music, the piper afterwards finds the town reneging on the agreed payment and takes a revenge by similarly drawing the town’s children away. There have been a number of film versions of the Pied Piper story before, the most well-known being The Pied Piper of Hamelin (1957), a musical version for US tv starring Van Johnson; the fine, historically grounded The Pied Piper (1972) from Jacques Demy starring Donovan in the title role; and Czech stop-motion animator Jiri Bata’s The Pied Piper (1986).

For a time in, The Piper looked like it was just going to be a regular telling of the fairytale. It serves up a variety of familiar characters – the simple-minded piper, his ailing son who is intended to tug our heartstrings (a character that does not exist in the original story), the pure-hearted love interest and the venal villagers. Things seem passably well drawn between serious drama and broad comedy. Things start to become interesting when Kim Kawng-tae pulls off a majestic scene, shot in wide angles and aerial shots down on the entire village, where the piper draws the rats en masse out of the village using a cloud of fumes and a trail of powder.

Up to this point, it is perfectly conceivable that The Piper could still be operating as a standard version of the fairytale and viewable by a children’s audience (albeit pitched more as an adult drama). Things start to get really interesting as Kim Kwang-tae turns the story on its head. The scene with the villagers plotting and the elder turning perfectly innocuous things that the piper has done on their head to suggest he is a Communist spy have a fervid fascination that suddenly makes you sit bolt upright. Not to mention gives the film a sudden political dimension – one about how South Korea became rent with paranoia and suspicion and denunciation of suspected infiltrators from the North in the aftermath of the Korean War (although in Kim Kwang-tae’s own words, this is a broad allegory that could concern mob rule in any day and age).

After this point, The Piper starts to take a turn for the brutal and harrowing – none the more so than when the hero of the show has his fingers severed. The Pied Piper story is turned into something akin to Clint Eastwood’s High Plains Drifter (1973) in which the piper acts as a force of supernatural retribution for the villager’s collective guilt over their driving out of a colony of lepers (at least I think that is what happened – it is not always clear reading through subtitles what exactly transpired). There is the extraordinary vision where the bloodied shaman woman appears to deliver a prophecy of their doom.

After other atrocities, we arrive at the amazing ending [PLOT SPOILERS] where we get a repeat of the classical ending of the fairytale but with a much grimmer emphasis. The piper builds another cloud of fumes as the score itself starts to brood with violence about to explode – all stentorious, grinding brass – and the rats are unleashed to tear apart the villagers. The final image of the piper with white-painted face smeared with blood dancing through the village playing his pipe, leading the children after him and locking them all in the same hillside cave in the where he despatched the rats is grim and unforgettable.