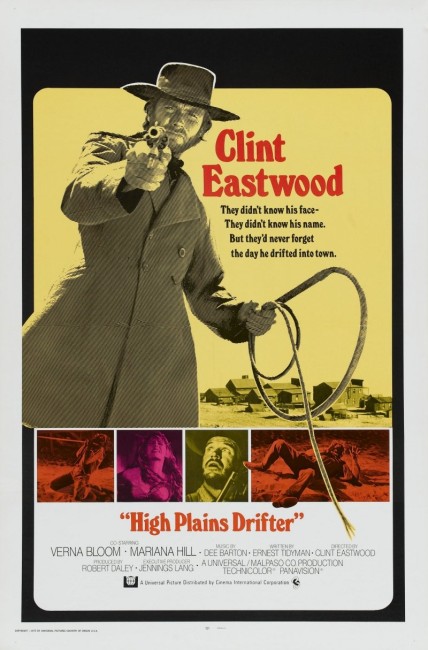 A nameless gunslinger rides into the small mining town of Lago. After he demonstrates his prowess against a local hood, the town council votes to hire him to protect the town from three men who are being released from jail the next day. The three men are gunslingers who were hired to protect the town’s mine but were framed by the townspeople after they started to throw their weight around. In return for his services, the stranger receives a free slate everywhere he goes in town. Soon however his demands become increasingly extravagant and outlandish – taking over the entire hotel, appointing a dwarf the sheriff, throwing a picnic and ordering a barn demolished to make tables – and the townspeople regret their words and make plans to kill him. As the three men’s return nears, the secrets the town hides – about their murder of the sheriff who was about to expose that the mine was built on government land – start to come out and the townspeople realize they are being punished for their hypocrisies.

High Plains Drifter was Clint Eastwood’s second directorial outing and is one of his best films. The 1970s was a point where the traditional Western was being sharply deconstructed – The Wild Bunch (1969) began a spate of violent anti-Westerns where standard heroic visions of John Wayne and Gary Cooper riding in to save the day were depicted as much more morally muddied. In this regard, High Plains Drifter is an anti-Western version of High Noon (1952). (The two would make an interesting double-bill). High Noon taps into the black-and-white heroism of the traditional Western, with Gary Cooper’s sheriff trying to rally the fearful townspeople onto his side to defend against hired killers coming to town and taking a lone stance when all others lack the courage; High Plains Drifter has the cowardly townspeople hiring Clint Eastwood’s nameless gunslinger to defend them against three killers coming back to town.

Where High Noon concerned itself with the heroism of one man standing alone when nobody else will, High Plains Drifter reverses it with black irony and has the one gunman standing alone becoming a force of righteousness come to (it is eventually revealed) supernaturally visit damnation and judgment on the townspeople for their cowardice and hypocrisy. It could almost be a sequel to High Noon, one that is construed with the purpose of visiting a puritanical judgment call of wrath down on the self-serving cowardice of the townspeople.

In making High Plains Drifter, Clint Eastwood clearly draws upon the influence of director Sergio Leone, who had brought Eastwood to fame in a series of Spaghetti Westerns in the 1960s – A Fistful of Dollars (1964) and sequel and The Good, the Bad and the Ugly (1966). Eastwood has directly transplanted his Man With No Name persona from this films and gives it a good workout – all in black, with unsmiling mien and monosyllabic dialogue and, like the Leone Westerns, the character left deliberately unnamed. He directs in similar style – with short, sharp and crude, but nevertheless precise bursts. The moral points come grim and brutally barbed and the script hammers each home with dark twists of irony.

The film’s pictures of women are certainly odd – Marianna Hill’s hooker takes exception to Eastwood and eventually enjoys being raped by him in a way that becomes strangely sadomasochistic, or how he just happens to wake up in the same bed with Verna Bloom, another man’s wife, with no explanation whatsoever.

Clint Eastwood’s other genre films as director are:– the female stalker psycho-thriller Play Misty for Me (1971), the hi-tech fighter plane heist Firefox (1982), the oldsters in space film Space Cowboys (2000), the psycho-thriller Blood Work (2002), Changeling (2008), a true-life story about a missing child, a police cover-up and a serial killer, and the afterlife character drama Hereafter (2010). In acting appearances, aside from most of the aforementioned, Eastwood has appeared in Revenge of the Creature (1955), Tarantula (1955), the talking mule film Francis in the Navy (1955), the twisted Southern Gothic horror The Beguiled (1971), up against a serial killer in his most famous role Dirty Harry (1971), the S&M psycho-thriller Tightrope (1984) and the Dirty Harry film The Dead Pool (1988).