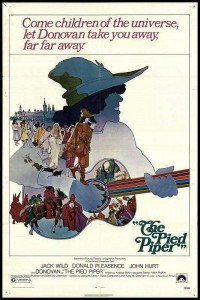 North Germany in the year 1347 at the height of the Black Plague. A piper joins a group of travelling troubadours as they travel to Hamlin. In the city, the Baron is obsessed with raising the funds to build a cathedral. His son Franz, who commands the army, plans to marry the Burgomaster’s young daughter Lisa for her dowry but she is bedridden. Franz commands the Jewish alchemist Melius to transform lead into gold and throws him in the dungeon to hurry him up. The piper comes to see Lisa and his music is successfully able to rouse her. The city is then overrun by hordes of rats. As the authorities struggle to deal with the problem, the piper offers to get rid of the rats for a thousand guilders. The townspeople agree and the piper plays a tune that causes the rats to follow him whereupon he leads them into the river to drown. The burgomaster then cheats the piper and only tries to pay fifty guilders. After this, the piper takes a terrible revenge on the people of Hamlin.

The legend of the Piped Piper of Hamelin (usually spelt as Hamlin in most English-language tellings) has seeped into folklore and fairytales. Traces of it were first recorded as far back as the 14th Century – it appears to have some historical basis in that the very first surviving records of the German town of Hamelin mention that the children ‘went away’, although do not offer any more explanations as to what happened than that. In the 19th Century, the story of the Pied Piper was written down by Goethe and later popularised by the Brothers Grimm.

This version of The Pied Piper was made by French director Jacques Demy who had emerged during the French New Wave of the 1960s, making films such as Lola (1960) and the musicals The Umbrellas of Cherbourg (1964) and The Young Girls of Rochefort (1967). Just prior to this, Demy made Donkey Skin (1970), a whimsical venture into the fairytale that was peppered with frequently surreal touches. His one other venture into genre material was the self-explanatory comedy A Slightly Pregnant Man (1973).

Following Donkey Skin, a British production company offered Demy the opportunity to make another fairytale. That said, Demy makes a very different film to Donkey Skin, abandoning that film’s whimsical silliness for a gritty and historically grounded story. Quite possibly Demy or the producers took inspiration from/were seeking to jump aboard the bandwagon created by the recent killer rat film Willard (1971), which had been a big success the year before.

In the era when the fairytale has been repurposed as dark adult fantasy with the likes of Red Riding Hood (2011) and Snow White and the Huntsman (2012), it is difficult to give people an idea of how groundbreaking The Pied Piper was in its day. Up until that point, the fairytale on screen had been represented by Disney animation or occasional live-action films made either as musicals like The Glass Slipper (1955) or cast with comedians as in Abbott and Costello’s Jack and the Beanstalk (1952), Snow White and the Three Stooges (1961) and Jerry Lewis’s Cinderfella (1960).

By contrast to all of these, Jacques Demy grounds the story of the Pied Piper in an historical reality. He gives the film a place and date and all around it is outfitted with a pseudo-historical realism – the rats are seen as the carriers of the Black Death; the script digs into the hypocrisy and wealth of the Catholic Church, while its priesthood are decked out in the red robes of the Inquisition; the alchemist character played by Michael Hordern is subject to the Anti-Semitism of the era. It is certainly not what we expect of a fairytale.

Jacques Demy creates a fairy impressive film – especially good is the scene where the Piper draws the rats away from the open-air council meeting, leads them down into the river and then returns to the council meeting only to face mayor Roy Kinnear’s squirming hypocrisy about getting out of the agreed payment.

The role of the Piper is played by Donovan [Leitch] who had risen to some popularity as a folk singer in the 1960s. Donovan is quieter in the role than one expected possibly due to his lack of prior acting experience – the way the role of the Piper as written should burst with a larger-than-life charisma. Elsewhere the cast is filled with an impressive range of names from the British industry – Donald Pleasence as the baron and a young John Hurt giving a cold and arrogant performance as his son, Michael Horden as the alchemist, Roy Kinnear as the mayor and 1950s blonde bombshell Diana Dors as the mayor’s wife,