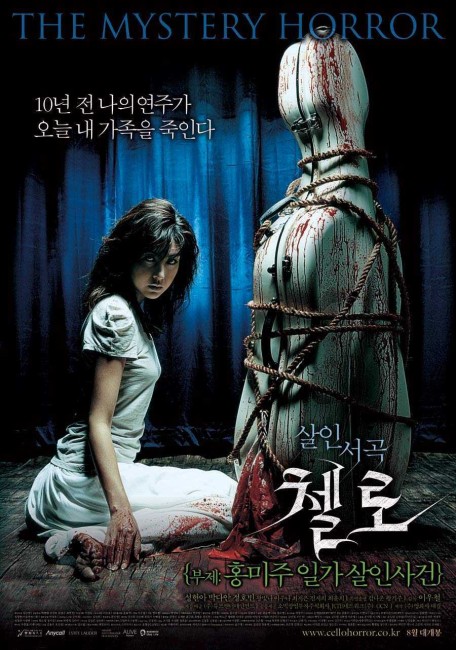 While visiting the school where she used to work, Hong Mi-Ju’s former boss implores her to return to her job as a music teacher. At the same time, an ex-pupil threatens revenge against Mi-Ju for having given her a low grade. Afterwards, Mi-Ju experiences disturbing things, including nearly being run over in a carpark and finding a dead animal in her locker. After breaking up with her fiance, Mi-Ju’s sister Kyung-Ran is haunted by a ghostly figure and hangs herself. Mi-Ju believes the ghostly figure is coming to claim her family. She relates this back to how Kim Tae-Yeon, her rival cellist at the musical school, was killed in a car crash while Mi-Ju was driving.

Cello is an average entry in this Korean ghost story mini-genre. It is clearly trying to be another Ring – Park Da-an’s Kim Tae-yeon is Sadako in all but name. Director Lee Woo-cheol produces some spooky happenings. There are even one or two of these that seem quite imaginative – I liked a scene where a figure moves inside a photo then abruptly jumps out to shove sister Jin Woo out the window before Sung Hyun-Ah comes in to find her hanging on the balcony. There’s also the scene where teenage daughter Choi Ji-Eun has the younger daughter Jin Ji-Hee dangling from the balcony and there is that horrible moment where you wonder if the film is going to break cinematic taboo and kill the kid or not.

I must admit the film left me confused for some way in. There is the strong scene at the start where Sung Hyun-Ah is confronted by a student who promises revenge for having been given a low grade. I felt confused as to how this subsequently related when everything started getting spooky as the student is clearly a different girl to the Park Da-an we see in flashbacks who appears to be the agency behind the hauntings. The film confuses things even more so by giving us two entirely different flashbacks to what happened during the car crash.

[PLOT SPOILERS] The film goes out on a slingshot where it appears all of this was an hallucination had by Sung Hyun-Ah while she was in a coma after the car crash. She returns home only to find that events are about to happen all over again in what would appear to be a deathdream ending.

Director Lee Woo-cheol has never made another film.