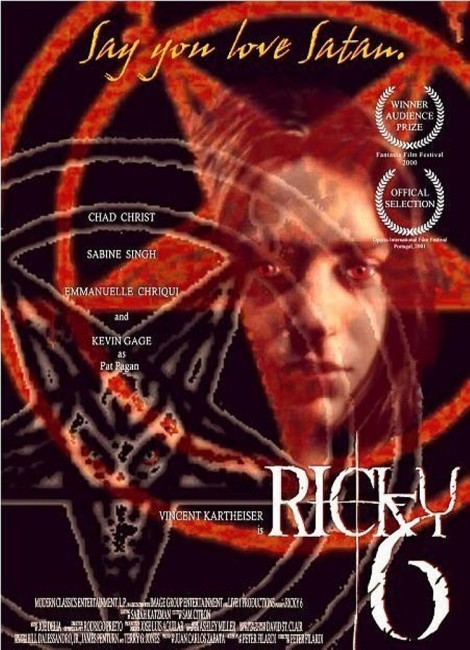 The town of Harmony, New York, 1983. Disaffected teenager Ricky Cowen discovers Satanism and begins to read up on it. He then involves his school friends in rituals and makes them swear to love Satan. At the same time, Ricky fuels them with dreams of going to California. He begins selling drugs as a means of funding the trip. When Tweazel steals some of Ricky’s drugs, Ricky takes him and the others partying in the woods where, under the influence of drugs, Ricky conducts a ritual and kills Tweazel.

The story of Ricky Kasso (1967-84) has fuelled some fascination and there have been several books and documentaries about him. In 1983, Ricky was a disaffected teenager in Newport, New York who was dealing drugs and taking a good deal of them. He had drawn a group of fellow peers into his interest in Satanism and the black arts. In June 1984, Ricky and several others went to party in the woods, taking drugs where Kasso pushed the others to stab to death Gary Lauwers, who had stolen some drugs from him (although this did not take place as part of a Satanic ritual as is often misreported). Kasso was arrested and two days later hanged himself in his jail cell. Ricky 6 is a film about Ricky Kasso based on the book Say You Love Satan (1987) by David St. Clair. The Ricky Kasso story also fuelled another film around the same time with the more fictionalised but far more interesting Black Circle Boys (1997).

Ricky 6 was a directorial debut for Peter Filardi who had had some prior success as a screenwriter with the afterlife film Flatliners (1990), the witchcraft film The Craft (1996) and the tv remake of ‘Salem’s Lot (2004), plus one of the episodes of Nightmares & Dreamscapes: From the Stories of Stephen King (2006). This has been Filrdi’s only directorial outing to date.

I wanted to like Ricky 6 because I though the subject matter was interesting. I was thinking the film would come out something akin to the bleak drugs and no-future portrait of troubled youth we had in River’s Edge (1986). However, Ricky 6 ends up being far more middle of the road and underwhelming than that.

The one good thing the film does is that it dispenses with all the usual cliches of Devil Worship – figures in black/red hooded robes chanting in Latin accompanied by Gregorian choruses, the orgiastic practices of the coven etc. Instead what we get is a portrait of a teenage wannabe who is dabbling in something and trying to piece together the rudiments of a religious practice along the way. In other words, it is a film about the way most people in the real world actually practice Satanism as opposed to the Hollywood cliches of it.

The disappointment of the film is that Peter Filardi takes a very dark story and does nothing much with it. Ricky 6 feels at best like wannabe Larry Clark film that never much leaves the safety zone of the place most tv movies inhabit. Vincent Kartheiser’s performance feels at most like a decent kid gone off the tracks wondering what has gone wrong. Certainly, Kartheisser does okay in the scenes where he acts as a wide-eyed evangelist for what he believes. On the other hand, his performance pales against the demoniac one that Eric Mabius gave in Black Circle Boys.