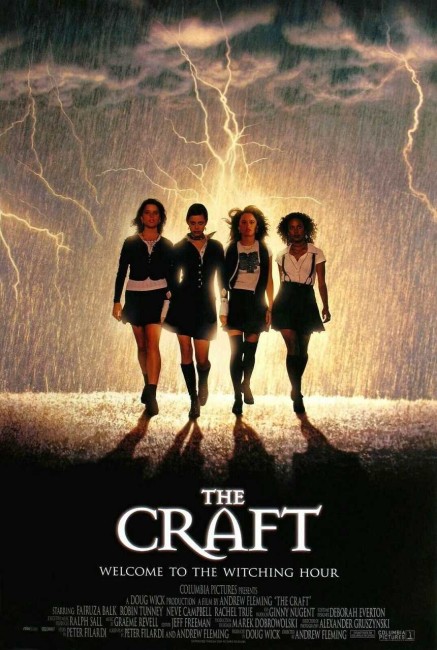 Sarah Bailey moves to Los Angeles with her father and settles into a new school. She is accepted into a clique of three girls who are reputed to have powers of witchcraft and are seeking a fourth to make up an occult compass. They are able to conduct magic together, with Sarah turning a guy who trashes her reputation around the school into a willing slave. One of the group, Nancy, then conducts a dangerous ceremony known as The Summoning of the Spirit. Afterwards, she becomes crazed with magical power. When Sarah quits the circle and tries to bind Nancy’s power, the other three turn against her and try to kill her.

At one point in The Craft, one of the quartet of teenage witches refers to themselves as ‘The Bitches of Eastwick’. It is a spot on comparison, for the film could be a teen version of The Witches of Eastwick (1987). When it came out, The Craft managed to achieve a respectable success, a large part of which seemed due to judicious selling among its target teen audience. It came with a poster highlighting its four characters, trendily dressed and marching with intent while backlit by a flash of lightning, which suggested all in one that the film had a finger on the teen pulse and of witchcraft as being some kind of teen empowerment fantasy.

The film is attractively put together. It is photographed with a sumptuous colour palette. The teen cast all give decent performances. Particularly good is Fairuza Balk as the cynical teen Goth – it is hard to believe that she is the same kid who ten years before this played Dorothy in Disney’s Return to Oz (1985). The first half of the film contains a sharply observant depiction of teens and school life – Skeet Ulrich gives an finely attuned performance as the guy who trashes Robin Tunney’s reputation around the school after she turns his advances down; or the snobbish bitchery of Christine Taylor; and Fairuza Balk’s burned-out cynicism. The introduction of the magic starts well – there is one amusing scene where the witches sit down to get inspiration by watching tv’s Bewitched (1964-72).

Unfortunately, The Craft comes apart in its latter half. Despite a promising start, the story falls into a predictable arc. While the film starts with scenes of the characters delighting in the use of powers, the plot quickly falls into the hoary cliche that supernatural empowerment will inevitably turn against its user. Here the films feels the need to create a villain and end everything on a spectacular climax, something that bends the story completely out of shape.

Fairuza Balk starts out as the most interesting character in the film. By the end of the film, flying about, transforming herself into Robin Tunney to get a guy, trying to drive Tunney over the edge into suicide and so on, hercharacter has become a cartoon villain. (Indeed, decked out in black makeup and with her toothsome overbite, Fairuza Balk even looks like a cartoon character). The film never justifies itself in psychologically credible terms why Fairuza Balk would go from a cynical Goth to a power-crazed killer. For reasons that are never explained, the other two girls fall in behind her – she has the nominal explanation of having Summoned the Spirit, but they come with no such explanation.

We fail to end up with the same characters that the film starts out with and the only reason for this is the film’s contorting itself out of shape for the sake of a big effects climax and to create a villainess. The Craft feels like a film that ended up being trapped without a second act, which it then tried to resolve by resorting to a cliche ending. Similarly annoying is the epilogue where Neve Campbell and Rachel True visit Robin Tunney, tentatively inquiring about maybe getting together in a circle again whereupon Tunney causes a storm cloud to appear and lightning to blast a tree branch. Throughout, the story has seemed to be trying to make some moral point about misusage of powers but the end fade out on the lightning bolt and Tunney’s cold stare makes one wonder if right really has won or it is just one form of bitchery having triumphed over another.

The Craft: Legacy (2020) was a sequel featuring a different four girls. Andrew Fleming served as executive producer, while Fairuza Balk made a return cameo appearance.

The same basic formula subsequently inspires the inexplicably popular teen witch fantasy Charmed (1998-2006). The Covenant (2006) was a version with teenage male witches, while The Witch Files (2018) was a homage.