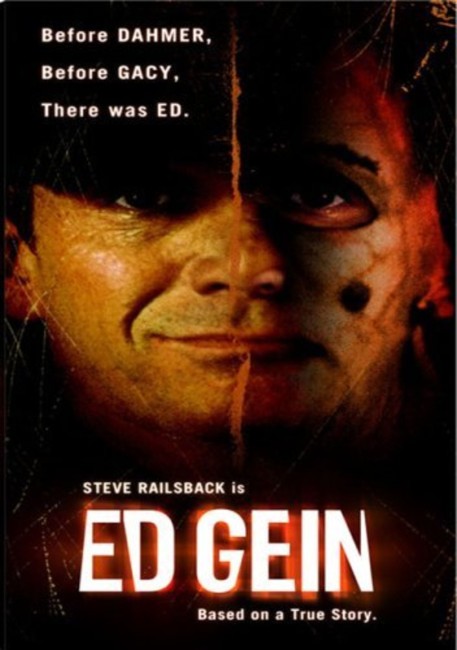 aka In the Light of the Moon

Ed Gein lives a solitary reclusive lifestyle in the small town of Plainfield, Wisconsin, where the locals regard him as strange. He remembers back to his harsh childhood and how attached he was to his staunchly religious, now late, mother. She now calls to him through visions and voices, telling him that if he kills Mary Hogan, the trash-talking woman who runs the local bar, that he can bring her back to life. Gein shoots Mary and then skins her and dresses in the body parts. Gein’s mother next urges him to kill Collette Marshall, the woman who runs the local hardware store.

Ed Gein is a film based on the true-life exploits of serial killer Ed Gein (1906-84). When Ed Gein was apprehended in 1957 in Plainfield, Wisconsin, by police searching for the missing Bernice Worden, his house was found filled with skinned corpses and numerous parts of dead bodies. Gein was eventually charged with the murder of two women, although is believed responsible for several others. Gein has often been cited as the basis for various movie psychos such as Norman Bates in Psycho (1960), the family in The Texas Chain Saw Massacre (1974) and Wild Bill in The Silence of the Lambs (1991). Gein’s story was also filmed as the earlier acclaimed but little seen Deranged (1974) and later as Ed Gein: The Butcher of Plainfield (2007), which bore little resemblance to the facts. Gein (as played by Michael Wincott) even turns up as a character to have conversations with and act as psychologist to the famed director in Hitchcock (2012).

There is a good deal of grisly potential to the Ed Gein story. Certainly, Ed Gein adheres closely to the historical details – including little anecdotes like the children seeing the shrunken heads, his stealing the cash register from the store during the second killing and even deals with the mysterious circumstances surrounding the death of Gein’s brother.

Unfortunately, Ed Gein is stuck down around the B-budget level in trying to tell the story. This is most notable when it comes to the depiction of Gein’s home. In actuality, Gein’s house was described as filled with rotting filth and junk and it was discovered that he had covered chairs, lampshades and wastepaper baskets in human skin, had carved human skulls into bowls, had made a collection of severed vaginas and breasts, even a belt out of nipples. However, there is nothing of that in the film. This is particularly evident in contrast to the Gein-inspired The Texas Chain Saw Massacre and its charnel house of rotting bones – at most, Ed Gein manages to have two shrunken heads on a wall that look exactly like they have been purchased from a Halloween novelty store. It seems too clean a film.

Ed Gein was directed by Chuck Parello, whose previous film was the disappointing Henry: Portrait of a Serial Killer Part II (1996). Chuck Parello’s handling in the fantasy and flashback scenes is disappointingly shoddy. Nevertheless, Ed Gein does come to life intermittently. The character of Mary Hogan is effectively drawn and the unexpected shooting of her has some shock, as does the intensity Parello puts into the second killing. Steve Railsback (who also Executive Produces the film) does a fine job of bringing Gein to life with a slow, awkward presence and a dangerously gravely voice.

Alas, the film has a crucial lack of courage when it comes to portraying Ed Gein’s necrophile and ghoulish practices. There is a single whacked out scene where we see Steve Railsback dancing around wearing the murdered woman’s skinned breasts and banging a tin drum, but this scene is all too brief. There is one other short scene where we see him digging up a grave but almost nothing is shown of the mutilated bodies, and nothing at all is mentioned about his necrophile tendencies.

Unfortunately, when you are making a film about Ed Gein, this represents a crucial tameness of spirit. If the film had explored these areas, it quite possibly would have been a classic; instead the film has barely even tiptoed up to the line of US censorship and in doing so has doomed itself to be quickly forgotten.

Chuck Parello later made a further true life serial killer film with the much superior The Hillside Strangler (2004).