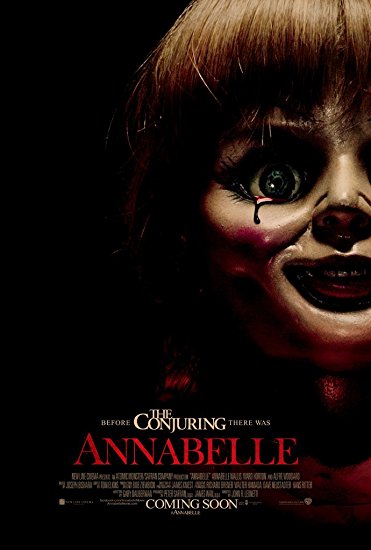 It is 1970. John Gordon presents his pregnant wife Mia with a porcelain doll. She thinks she hears screams next door and as John goes to investigate, the deranged Annabelle Higgins bursts into the house. In the midst of the fight, Mia’s pregnant belly is stabbed and Annabelle is killed while holding the doll. Returning home after recovering, Mia starts to see strange things happening around the house. John throws the doll out but later it turns up again. Even after they move to Pasadena and Mia gives birth to a daughter Lea, she is certain that something is haunting her and that the doll is moving. As she learns that Annabelle belonged to a cult, she comes to believe that they unleashed something that is wanting to claim their baby’s soul.

James Wan’s The Conjuring (2013) was the single biggest grossing horror film of 2013. It was based on the purportedly true accounts of paranormal investigators Ed and Lorraine Warren. The talking point of the film came to be the sinister doll we briefly saw during the tour of the Warrens’ occult museum in the prologue. The doll exists in real life and is a central exhibit of the Warrens’ museum in Connecticut. With Annabelle, the producers of The Conjuring have created a prequel centred around the story of the doll.

According to the Warrens, the real-life Annabelle doll (which is a Raggedy Ann doll as opposed to the porcelain doll we see in the film) was given as a present to an adult daughter identified only as Donna by her mother while she was a nursing student. After some time, Donna discovered that the doll would move position and even write messages. Investigation led the Warrens to believe that it was possessed by the spirit of a young girl named Annabelle Higgins who had died.

In the film, the Warrens are seen interviewing the nursing students in the opening scenes. Even if you are to accept the Warrens account of the supernatural as real – this author does not – everything that happens after the opening interview has been invented by the film. There is no equivalent of the characters of the married couple played by Annabelle Wallis and Ward Horton in the Warrens account, for instance. Thus Annabelle might be better considered akin to the host of sequels to The Amityville Horror (1979), which take leave of the first film’s claims to be based on truth and create entirely fictional stories.

With James Wan at the time having announced he has given up on the horror genre and going off to make Furious Seven (2015), direction of Annabelle was turned over to John R. Leonetti. (Wan is still present as a producer). Leonetti has a substantial career as a cinematographer and has performed the chores on several of James Wan’s films, including Dead Silence (2007), Death Sentence (2007), Insidious (2010), Insidious Chapter 2 (2013) and, of course, The Conjuring. Leonetti has occasionally taken the director’s chair and in every case, it has been a sequel to some other film, his works so far having included Mortal Kombat: Annihilation (1997) and The Butterfly Effect 2 (2006), although he did branch out into original material with the subsequent horror films Wolves at the Door (2016), Wish Upon (2017) and The Silence (2019).

I wanted Annabelle to be spooky and scary but it isn’t. John R. Leonetti tosses up a range of scenes with Annabelle Wallis being dragged away by an invisible force, phantom baby carriages, shadowy demonic figures lurking in the stairwell, various ominous set-pieces with the doll seeming to start kitchen fires and attacking priest Tony Amendola and so on. There is little in these that a hundred other formula horror films have not done.

Occasionally, the film produces a jump – I did like one effect where a little girl begins running at a closing door and bursts through having turned into a grown woman and then passes through Annabelle Wallis. Mostly though, it feels like Leonetti is straining to find the same atmosphere that James Wan created so effortlessly in the original.

Everything in the film disappears into a formulaic sameness of plotting – the heroine doubted in her claims as to supernatural manifestations; souls needed for sacrifice; the woman all-wise in matters of the occult who handily lives in the neighbourhood; phone calls that break up important moments; the presence of a sinister devil worship cult.

Annabelle: Creation (2017) was a prequel and was followed by Annabelle Comes Home (2019). The character of Tony Amendola’s priest also appears in a further spinoff The Curse of La Llorona (2019). Annabelle was parodied in A Haunted House 2 (2014), depicting Marlon Wayans becoming sexually obsessed with the doll.