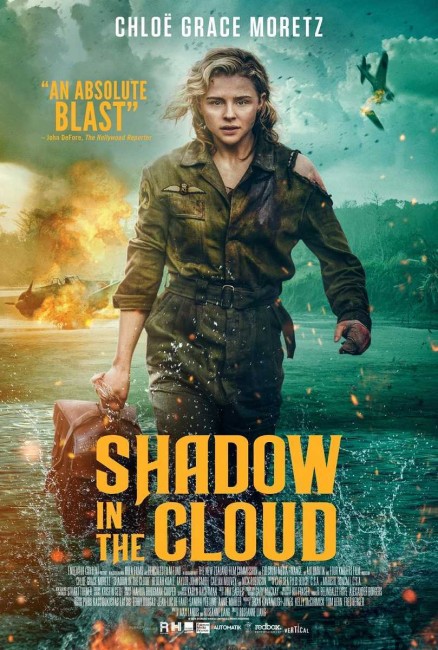 New Zealand, 1943, during the midst of World War II. A routine transport flight is about to depart from Auckland Allied Air Base for Samoa. At the last minute, Maude Garrett boards the flight against the protests of the all-male crew, showing that she has papers to be there and claiming she is a certified Flight Officer. She is placed in the gunnery turret and is insistent that they protect a package that she cannot fit inside the turret with her. Listening to the sexist comments being made about her on the intercom, Maude then sees a creature out on the wing, tearing out the machinery. As the plane starts to fail, she has difficulty convincing the others of the threat, even as she is forced to fight off the gremlin. At the same time, she also detects Japanese planes following them in the clouds.

Shadow in the Cloud was the second film from Roseanne Liang. Liang’s only previous full-length directorial film was the documentary Banana in a Nutshell (2005) about being a Westernised second generation Chinese living in New Zealand and living in a mixed race relationship. I had the chance to see Liang in appearance at a film festival but from memory skipped the film because it was scheduled against something else. Liang has made some short films and tv work, although it is kind of a surprise seeing her leapfrog from an autobiographical documentary to a big-budget genre film.

The surprise about the film is seeing the name of Max Landis attached. The son of director John Landis of The Blues Brothers (1980) and An American Werewolf in London (1981) fame, Max was on the rise as a screenwriter throughout the 2010s with works such as Chronicle (2012), American Ultra (2015), Victor Frankenstein (2015), Bright (2017) and as creator of the tv series Dirk Gently’s Holistic Detective Agency (2016-7). However, Landis attained some notoriety in 2019 after multiple accusations of sexual abuse came to light.

The surprise about Shadow in the Cloud is given Landis’s history of sexual predatoriness just what a strong female-centred and pro-feminist work that the film ends up being. The script was rewritten by Roseanne Liang but both Landis and Liang have disputed about how much of the work belongs to them, with Landis claiming that around 90% of it is his and going so far as to post his original script online so that people can see for themselves,

The script is a variation on the gremlins story. Gremlins were a concept that emerged among RAF airmen during World War II to explain sometimes inexplicable mechanical mishaps on aircraft. The idea was popularised by Roald Dahl in his first novel The Gremlins (1943) where he depicted the gremlins as mischievous creatures. A classic variant was The Twilight Zone episode Nightmare at 20,000 Feet (1963) starring William Shatner, later remade as an episode of Twilight Zone – The Movie (1983) – Shadow in the Cloud is essentially a feature-length version of Nightmare at 20,000 Feet. Dan O’Bannon was also working on a script called Gremlins in the 1970s, which eventually morphed into the basics of Alien (1979), while he reissued the idea in the B17 episode of Heavy Metal (1981) where the gremlins became zombies attacking the crew of a bomber. There was the hugely popular Joe Dante film Gremlins (1984) and its sequel Gremlins 2: The New Batch (1990), although the creatures there are more standard Goblins and have no connection to the gremlins that attack airplanes.

Shadow in the Cloud was an unknown before I sat down to watch but it promptly becomes an absorbing film. Our sympathies are with Chloe Grace Moretz as she enters the craft and is placed in the turret. There is then the unusual step where her interactions with the rest of the crew only take place by intercom – the film in effect becomes another Buried (2010), which had Ryan Reynolds confined to a coffin for the duration of the show reacting to others only by phone.

Over half the film’s runtime takes place with Chloe Grace Moretz in the turret. This produces some undeniable effect. We are engaged with Chloe Grace as she listens to the voices of the other men and their crudely disparaging comments about her over the intercom. There comes an abrupt jolt in the midst of this as the gremlin starts trying to force its way into the turret and she is forced to fight it off. The kicker is that even after she shoots it off, she faces a barrage of ridicule about what she just saw from the other men before having to deal with the appearance of a Japanese plane in the clouds. Shadow in the Cloud is a film with strong feminist sympathies and the scene where Chloe Grace Moretz silences everybody by turning the guns and shooting down the Japanese spy plane comes with a real surge of triumph.

The second half of the film expands the action out and has Chloe Grace Moretz first venturing around the outside of the plane to rescue the basket after it is snatched by the gremlin and then fighting to stay alive and land the plane as it is shredded by fire from the Japanese Zeros. Roseanne Liang (with the aid of the Weta Workshop) does a fine job of keeping one on the edge of the seat during these scenes. That said, I did have some believability quibbles with Chloe Grace managing to navigate her way around the outside of a plane cruising at cloud level without freezing to death, while holding onto the fuselage with a broken finger and managing to balance the weight of a basket containing a baby around her neck while hanging upside down. And that’s not mentioning the rather absurd scene where she falls out of the plane and is thrown up and back inside the hatch by an exploding plane below without also being incinerated by the explosion.