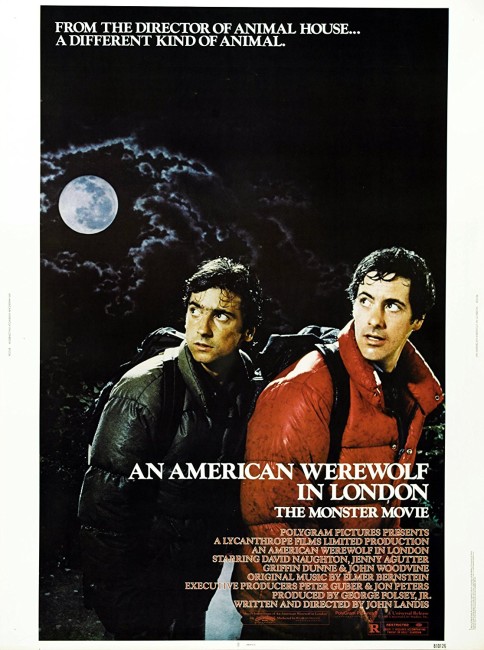 Two American friends, David Kessler and Jack Goodman, arrive in the small village of East Proctor while hiking through the English countryside. Turned away from the village pub after Jack innocently asks about a pentacle on the wall, they head onto the moors, only to be attacked by a wolf. David comes around in hospital in London three weeks later to learn that Jack was killed in the attack. He is soon plagued by disturbing nightmares. In these, Jack’s rotting corpse appears and tells him that they were attacked by a werewolf and that he, David, was bitten and will become a werewolf too. Jack urges David to kill himself before the full moon to prevent this. Thinking the idea crazy, David is then forced to confront it as a reality when he transforms into a wolf and runs amok throughout the city.

John Landis emerged as a major comedy director in the late 1970s. Landis had worked as a mailboy at 20th Century Fox, then obtained a job as an assistant director on Kelly’s Heroes (1970), before persuading family and friends to help raise a $60,000 budget to direct Schlock (1973), a likeably amusing monster movie parody. This led to the comedy portmanteau Kentucky Fried Movie (1977) and then the popular hit of the original frat rat comedy National Lampoon’s Animal House (1978). Landis then went onto the huge cult hit of surreal musical road movie The Blues Brothers (1980) and by the time of An American Werewolf in London was riding at an all-time career peak.

Landis’s run of success came apart with the manslaughter charges laid against him over the fatal accident on the set of his segment of Twilight Zone – The Movie (1983). Even though he was eventually acquitted of the charges, the rising star he had in the early 80s was never the same again. He has subsequently made a string of amiable but safe comedies with the likes of Trading Places (1983), Into the Night (1985), Three Amigos (1986) and Coming to America (1988) before traipsing off into indifferent fare like Oscar (1991), Beverly Hills Cop III (1994) and Blues Brothers 2000 (1998). Landis seems to have almost entirely vanished as a directorial force since the late 1990s, having only made a single film since 1998 with Burke & Hare (2010), which went to dvd in most places.

An American Werewolf came out six months after Joe Dante’s The Howling (1981). Both films are remarkably similar in what they do. They take the old werewolf film as laid down by WereWolf of London (1935) and the influential Lon Chaney Jr The Wolf Man (1941) and revamp it for the modern era. By 1980 and too many B movies, the werewolf film had been relegated to the realm of joke horror titles such as I Was a Teenage Werewolf (1957), Werewolf in a Girl’s Dormitory (1961), Werewolves on Wheels (1971), The Boy Who Cried Werewolf (1973), The Werewolf of Washington (1973) and The Werewolf of Woodstock (1975). The Howling and American Werewolf reconceptualise the werewolf film by dropping it tooth, nail and claw into a modern idiom. The running joke in American Werewolf is having its central character David Naughton, who could not seem more of an utterly average American college kid, suddenly forced to confront all the old B-movie cliches as real.

Both films are postmodern ones in the sense that they are made with an awareness of the genre of the werewolf film. In particular, The Howling comes filled with werewolf in-jokes, characters named after the directors of werewolf films and cameos from various genre regulars. John Landis and Joe Dante come from very similar places as genre fans – indeed, both grew up with a love of Famous Monsters of Filmland (1958-1982) and include cameos from its editor Forrest J. Ackerman in their films.

John Landis’s other films are filled with the same sort of in-jokes and cameos from genre regulars that The Howling overflows with and you suspect that he was wanting to do the same here but had to curtail this rather than being seen as an imitator of The Howling – at most we get a scene where David Naughton describes the means of stopping him to Jenny Agutter by reference to The Wolf Man. Where American Werewolf has it over The Howling is that it is far more of a character-driven story. The Howling is largely a film of werewolf movie in-jokes with one great effects scene; by contrast, American Werewolf is a story about how an ordinary guy David Naughton reacts to his transformation into the jokey old B-movie notion of a werewolf (an aspect that is strangely absent from The Howling).

The other radical change that The Howling and American Werewolf offered to the werewolf film was to take advantage of a revolution in makeup effects to show the human to wolf transformation in eye-popping real-time detail rather than the creaky old lap dissolves used by foregoing films. An American Werewolf in London had the edge somewhat taken off it by The Howling coming out first. I always thought The Howling had the wow factor over American Werewolf, despite being the lesser budgeted of the two, and it still does. However, The Howling was made squarely in B movie territory whereas American Werewolf had a much more high profile release and gained the greater attention with the wider public with Rick Baker winning an Academy Award for his makeup effects as a result. It is still a fantastic set-piece here where we see David Naughton lying on a bathroom floor, contorting and struggling as his bones twist and turn, his snout extends, hair grows over his body and he transforms into a wolf creature. On the minus side, the four-footed wolf never looks particularly convincing.

There is a very black sense of humour that runs throughout the film, which serves to give the standard werewolf movie plot a bizarreness. There are some very funny scenes in the images of David Naughton having conversations with the decomposing corpse of Griffin Dunne as Dunne nonchalantly plays with a Mickey Mouse clock or cheerfully introduces Naughton to the bodies of his victims while they converse at the back row of a porn cinema. Dunne will pop up with lines like “Can I have a piece of toast?” or “Have you ever tried having a conversation with a dead person? It’s boring” and then in the next urge Naughton to kill himself. (There is some fantastically good makeup effects on the progressively rotting Griffin Dunne during these scenes, even if he seems to be decomposing at a far more accelerated rate than is credible for the 2-3 day timeframe that the film takes place). For reasons not entirely clear, Landis throws in several dream sequences, including a bizarre one where machine-gun toting Nazi werewolves invade an average American household (which the credits tell us are David Naughton’s family) and massacre everyone while they are sitting watching The Muppet Show (1977-81).

An American Werewolf in London was innovative at what it did during its day, although I fall short of calling it the all-time great genre classic that many were certain it was at the time. It has a story that feels like it needs more to its telling but instead arrives too quickly at a downbeat and abrupt ending.

An American Werewolf in Paris (1997) was a thoroughly disappointing sequel. A remake has been announced by Dimension Films for some time in the 2010s but has so far failed to emerge. The low-budget The Snarling (2018) comes with a good many references and homages to American Werewolf.

John Landis did the same with vampires in the worthwhile Innocent Blood/A French Vampire in America (1992). Landis has had a number of other associations with fantastic cinema, including:– the monster movie parody Schlock (1973); the first segment of Twilight Zone – The Movie (1983); the MTV video for Michael Jackson’s horror movie homage Thriller (1983); the lame spy comedy Spies Like Us (1985); episodes of the comedy anthology Amazon Women on the Moon (1987); the gonzo comedy The Stupids (1996) about a family who take everything literally; Blues Brothers 2000 (1998), which has some fantastic elements; and Burke & Hare (2010), a comedy about the true-life body snatchers. Landis has also produced various genre tv series such as Weird Science (1994-6), Honey I Shrunk the Kids (1997) and The Lost World (1999).