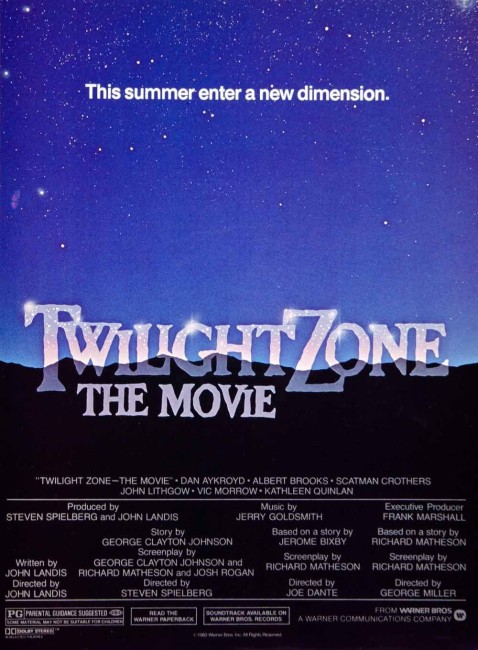 Prologue:- A driver plays a game with a hitch-hiker, driving without lights to see who can break first. The hitch-hiker then decides to show the driver something really scary… First Segment:- A middle-aged bigot is suddenly thrown through time where he is persecuted by the Nazis as a Jew and the Ku-Klux-Klan as a Black Man. Kick the Can:- Mr Bloom becomes a new resident at a geriatric home. He takes the other oldsters out at night to play a game of ‘Kick the Can’, which causes them to be magically transformed into children again. It’s a Good Life:- Helen Foley accidentally knocks young Anthony off his bicycle outside a diner. Concerned, she drives him home. She meets Anthony’s family who seem to live in terror of him. She then learns that he keeps them prisoner, as he has the power to manifest anything he wishes. Nightmare at 20,000 Feet:- A man terrified of flying boards a plane flight. However, as the journey gets underway, he is unable to convince anybody there is a creature out on the wing tearing the engines apart.

The tv series The Twilight Zone (1959-63) was a genre landmark. The Twilight Zone was created, written and hosted by Rod Serling, a writer who had delivered highly acclaimed and award-winning plays from the early days of live television with the likes of Patterns (1956) and Requiem for a Heavyweight (1956). The Twilight Zone used an anthology format to tell science-fiction, horror and fantasy tales. Rod Serling was workaholic and wrote nearly three-quarters of the 92 episodes during the series’ run, as well as producing and hosting the series. Serling’s dialogue often overburdened into shrill moralising but when he wrote well – which was more often than not – his stories ended on thoughtful O. Henry-esque twists that pulled the carpet out from under one’s expectations.

The science-fiction of the decade up until that point had all been bombast concerned with alien threats from outside – Rod Serling was one of the first to take this in more internalised directions, where instead of the world being attacked and humanity triumphing, stories ended in places of thoughtful uncertainty where one’s original assumptions were not always what they seemed. Some of the episodes are minor masterpieces of psychological tension. The term ‘the twilight zone’, which Serling had intended as a nebulous phrase meaning a place where all rules of reason are suspended and anything can happen, has gone on to enter popular parlance.

In 1983, Steven Spielberg, then riding high on the successes of Close Encounters of the Third Kind (1977), Raiders of the Lost Ark (1981) and E.T. – The Extra-Terrestrial (1982), purchased the rights to the series and made this anthology film. Spielberg employed Richard Matheson and George Clayton Johnston, who scripted many episodes of the original tv series, to deliver the film’s script.

Three of the film’s four stories (all but the first) are remakes of episodes from the tv series. Steven Spielberg has also brought in various contemporary fantasy directors – John Landis, who had just made An American Werewolf in London (1981); Joe Dante, who was having success with his quirky B-budget genre homages Piranha (1978), which spoofs Spielberg’s own Jaws (1975) in no small part, and The Howling (1980); and Australian director George Miller who had just had a big hit with Mad Max 2/The Road Warrior (1981).

John Landis directs the prologue and the first episode. The prologue with its quick-fire banter and short-sharp twist ending works better than the episode that follows. The episode itself buys into the just desserts moralistic tub-beating that typified the worst parts about the tv series where Rod Serling liked to create straw characters to moralistically pontificate about. While calling someone racial names is certainly intolerable, throwing someone through some of the worst racial persecutions in history seems somewhat of an overreaction in terms of punishment. John Landis nevertheless directs the episode with slick and exciting camerawork and there is one good final image of Vic Morrow crying out through the slats of a train on its way to the Nazi gas chambers as his buddies are seen emerging from the bar on the other side.

Much controversy surrounds the segment when Vic Morrow and two children were killed when pyrotechnics caused a helicopter to crash during shooting in 1982. John Landis and four others of the crew were placed on involuntarily manslaughter charges, although were later acquitted.

Surprisingly, Steven Spielberg’s episode Kick the Can is the weakest of the segments. It is Spielberg’s childhood obsessions perhaps at their most literally personified. The slimness of the premise never gives Spielberg much opportunity to open up. The sentiments engendered are corny and sentimental and the wistful tone aimed for shallow.

Joe Dante has clear fun with the It’s a Good Life segment. Both the piece and the original tv episode are adapted from Jerome Bixby’s popular 1953 short story of the same name. The episode emerges as a version of The Man Who Could Work Miracles (1937) as directed by Steven Spielberg. All of Joe Dante’s films are overrun with genre in-jokes and references – here Dick Miller makes his customary appearance (as he does in all of Dante’s films) and most of the characters are named after characters that appeared in various Twilight Zone episodes (Kathleen Quinlan’s Helen Foley is even named after the high school teacher that Rod Serling acknowledged as one of the influences on his writing – how’s that for trivia?).

As with any Joe Dante film, it is the ability to have fun with the genre that has drawn Dante’s attention. What clearly interests Dante here is being able to bring cartoon characters to life and characters thrown into a cartoon universe – an aspect completely added over the story or the tv version of the story. The film predates Who Framed Roger Rabbit? (1988) in this regard – although unlike Roger Rabbit, Dante crafts cartoon characters as three-dimensional rather than drawn objects. [Dante later got to make his own feature-length toon film with Looney Tunes: Back in Action (2003)]. Rob Bottin’s creation of a huge sinister cartoon rabbit is wonderfully scary and inventive. There is also the marvellously ick image of a girl imprisoned without any mouth. The episode works well enough, although the maudlin ‘happily ever after’ ending with Jeremy Licht causing flowers to sprout along the roadside as he and Kathleen Quinlan drive off into the sunset is terribly trite.

George Miller’s Nightmare at 20,000 Feet is the gem among the four episodes. It is a wonderful exercise in jokey-scary claustrophobia. Miller whips his camera about, shooting John Lithgow’s quivering face in wide, distorted angles and depicting the other passengers with a paranoid weirdness. Using exactly the same running time that all the other episodes do, George Miller manages to run a rollercoaster ride between scares, pulling back to make us think the character imagined it, paranoia and humour. This is one episode that should have been made as a feature film.

Overall, Twilight Zone – The Movie is a disappointment. Only the Nightmare at 20,000 Feet segment stands out, while the other stories seem to miss the essence of the original tv Twilight Zone and never inhabit that same haunted psychological space that Rod Serling’s tales did. Only the prologue and epilogue come with the Twilight Zone-esque sting in the tale. The film was only a modest success, not the blockbuster that many other Steven Spielberg films had been. It did however pave the way for a major revival of horror/fantasy tv anthology series. There have been not only three revivals of the tv series, The Twilight Zone (1985-9), The Twilight Zone (2002-3) and The Twilight Zone (2019– ), which have all proved disappointingly bland shadows of their eminent predecessor, but also of classic other anthology series of the 1950s and 60s – Alfred Hitchcock Presents (1985-9) and The Outer Limits (1995-2002), as well as various original anthology series such as Tales from the Darkside (1983-8), The Hitch-Hiker (1983-91), The Ray Bradbury Theater (1985-92), Monsters (1988-90) and Tales from the Crypt (1989-96).