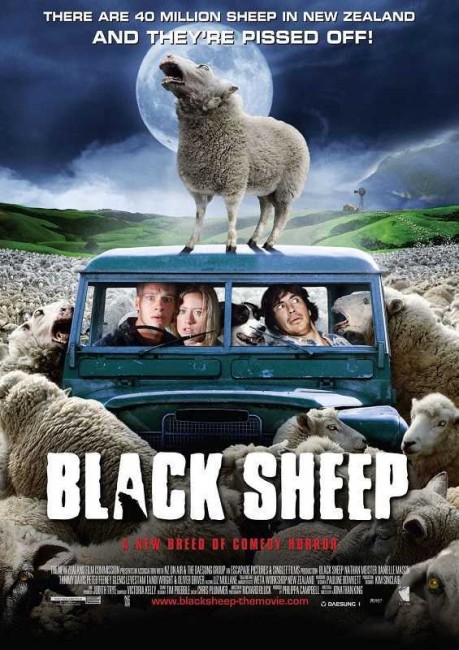 Henry Oldfield returns to the family sheep farm on Glenolden Station for the first time in fifteen years. Due to a childhood trauma where his brother Angus scared him with a sheep carcass, Henry has a pathological fear of sheep. On the farm, Angus has been experimenting with genetic engineering to produce a better sheep and wants Henry to sell his half of the farm to him so that he can market the new breed. Meanwhile, two environmental protestors have snuck onto the farm and one of them, Grant, has stolen a flask of genetic waste product. During the pursuit, the flask is shattered, unleashing a mutated sheep foetus that sinks its teeth into Grant and then drags itself on to bite the other sheep in the paddock. Grant starts to mutate, grows hooves and develops a taste for animal flesh. Meanwhile, the infected sheep turn on humans, tearing them apart and devouring them. Henry, the other protestor Experience and the farm manager Tucker are forced to flee across the fields, pursued by mutant killer sheep.

New Zealand is a nation of sheep farmers. It is a country where sheep outnumber the human population by 40 million animals to 4 million people. A good part of the tourist trade the country enjoys is based around selling sheep-related products from woollen clothing to sheepskin rugs and miniature souvenir sheep. In that there are tenty sheep per every woman in this country, a certain amount of local humour revolves around sheep shagging jokes. Sheep jokes are something that one has become so accustomed to that it is a surprise that no-one has made anything of it on screen before now – although Peter Jackson did conduct an hilarious gag with a sheep and a misfired rocket launcher in Bad Taste (1988). (Although at the time I wrote that I was not aware of Godmonster of Indian Flats (1976), an obscure work featuring a mutant sheep that was hardly seen by anybody during its original release).

It is no surprise that comparisons Bad Taste and Black Sheep arise – Bad Taste is a film whose influence Black Sheep seeks to reverentially walk in the shadow of. Both are New Zealand films that try to straddle a line between tongue-in-cheek comedy and gory splatter; and both draw much humour from a sense of Kiwi parochialism. (To draw even further connections, director/screenwriter Jonathan King has hired Peter Jackson’s Weta Workshop facility to deliver the various splatter and creature effects for the film).

On the other hand, while it tries hard, Black Sheep is stuck down at the level of being a Bad Taste wannabe. Crucially, the first two-thirds of Black Sheep is too tame and ordinary – it lacks any of the energy or madcap inventiveness of Peter Jackson’s splatter films. At times, it feels forced in its attempts to be funny. There are the inevitable sheep shagging jokes – Nathan Meister to Tammy Davis while running from killer sheep: “Fuck the sheep,” which gets the reply “No time for that.” Danielle Mason’s flaky Greenie Experience gets overplayed to the point that the character seems to have almost no other purpose in the film than to be there as a comic prop spouting New Age doubletalk. All of this could have been funny but Jonathan King lacks a sufficient lightness of touch and confidence in the humour and instead repeats the jokes and keeps overemphasizing them to make sure that we get them.

To his credit, Jonathan King gets it right in the last third – about the point that we see the visitors at Peter Feeney’s reception gorily torn apart by killer sheep – where he finally discovers the gonzo sense of humour that Peter Jackson mastered. Here King sets to make out as many sheep-related jokes as he can – Nathan Meister comes across his brother Peter Feeney half-naked in his study with the prize sheep as Feeney tries to apologize “You wouldn’t understand”; Meister tries to make an escape across a field of sheep by disguising himself underneath a sheepskin carseat cover, only to find himself being mounted in mid-field by a sheep in heat; a mutant sheep is driven away by a bottle of mint sauce, which has the equivalent effect of holy water on a vampire; sheep-drench proves a handy antidote to mutant sheep gene infection; and the climax involves using a sheepdog to make the über-sheep monster back down.

Although their work elsewhere has been exemplary and won Oscars, the Weta Workshop’s effects here are decidedly variable. The foetus puppet that attacks Oliver Driver and a sheep near the beginning is one of the weakest effects. Unfortunately, in it being the first effect we see, this does not bode well for the rest of the film ie. one has gone in expecting a gore-drenched splatter comedy only to end up seeing an awkward animatronic, which lets one’s expectations down with a crashing sense of disappointment. Similarly, Jonathan King gives us several scenes with killer sheep charging after people and trying to batter through doors but the sheep’s heads that we see here look like obvious animatronic effects.

To Black Sheep‘s credit, the film does pick up and eventually become very gory. The numerous splatter effects and human-sheep hybrids that we see in the latter third work far more effectively. Weta even try to conduct a human-into-sheep air bladder transformation a la The Howling (1981) and An American Werewolf in London (1981), which starts out impressively, only for Jonathan King to disappointingly cut away before the transformation reaches its full effect.

Less effectively, the plot for Black Sheep feels like it has been put together out of cookie cutter formula horror movie elements. The genetic engineering element has ‘Generic Monster Movie Raison d’Etre‘ written all over it. The villains – Peter Feeney as the double-dealing brother and Tandi Wright as the chief genetic scientist – are one-dimensional and obvious. The plot device of environmental protestors breaking into a genetic research laboratory and accidentally unleashing a monstrous menace well and truly belongs in the book of groan-worthy genre cliches. One would think if Jonathan King was setting out to make a horror comedy that the least he could have done was to wryly puncture or poke fun at some of these cliches instead of coming up with a plot that is reliant on them. King also keeps throwing in comedic shock cuts – to Glenis Levestam gutting a rabbit to make a stew, she making a haggis or of a can of spaghetti being tipped into a pot – but the overemphasis of effect feels like it is being directorially battered to death.

The cast are stuck in generic roles of little depth or substance so it is hard to tell what potential they hold. Nathan Meister is too neurotic to seem much of a hero. As mentioned before, Danielle Mason’s comic New Ager is simply a one-note character. Tammy Davis as the Maori farm manager Tucker has a lot of natural humour and likeable charisma and one suspects would have made a far more engaging lead than Nathan Meister.

Also borrowing a leaf from Peter Jackson’s Braindead/Deadalive (1992), Jonathan King throws in numerous Kiwiana jokes – references to Anzac biscuits and local colloquialisms like “She’ll be right, mate,” while the award from the actual Golden Shears competition (for sheep-shearing) plays an integral part in the film. The humour in Black Sheep falls into the easy comic divisions in New Zealand cinema, which seem caught between whether sympathies lie with the city slickers or the country people and their simple, down to earth ways.

A good deal of New Zealand cinema seems to brood with sullen loner heroes who sit outside of society and are unable to understand the ways of urbanified peoples – films like Smash Palace (1981), Bad Blood (1982), Pallet on the Floor (1984), Vigil (1985), Bridge to Nowhere (1986) and The Piano (1993). In fact, you could go so far as to say that one of the overriding themes of almost all New Zealand films is an alienated sense of cultural inclusion and identity. A number of Kiwi films of the last two decades – Bridge to Nowhere, Jackson’s Bad Taste, The Locals (2003) – have derived a good deal of humour and tension from the contrast of metropolitan and country ways.

By the time of Black Sheep, this has become easy, safe humour. The country folk are seen as good-natured, easygoing and quick to improvise in any situation. On the other side of the paddock, the two city folk – Nathan Meister’s hero and Danielle Mason’s Experience – are characterised as comic figures because of their attachment to metropolitan pretensions. Meister has to call his therapist every time he comes across a sheep and does not know what to do when he gets out of cellphone coverage range, there is a big joke about the fact that he has charted a taxi out into the country and run up a $900 bill, while Experience’s New Age loopiness is made fun of just about every time that Danielle Mason opens her mouth.

As characters, their arcs are not terribly exciting ones where they must forget their city pretensions and learn to enjoy rural ways – Meister by learning to overcome his fear of sheep, she by undergoing the ritual humiliation of eating Mountain Oysters (sheep’s testicles – a local delicacy) without knowing what they are and with both of them settling down and mucking in on the farm at the end. Comically and all as it is presented, it seems only points on a continuum removed in attitude from the rejections of all that is modern that the Amish or back-to-nature communes operate by.

Jonathan King next went onto direct the children’s alien invasion film Under the Mountain (2009) and the science-fiction film Realiti (2014) about brainwashing drugs. King has also co-written the New Zealand horror film The Tattooist (2007).