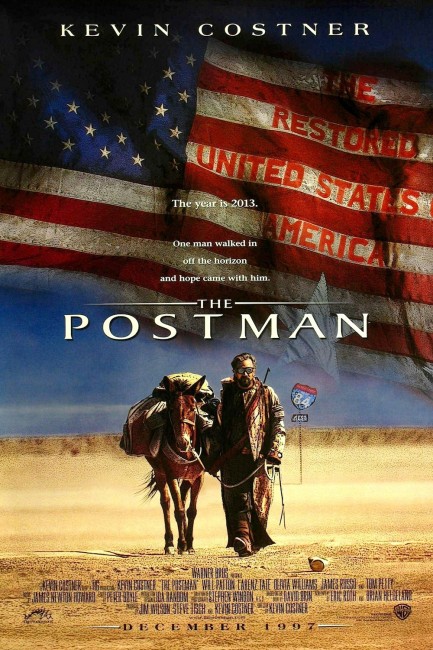 It is the year 2013 after the world has been devastated by nuclear war and now lies split up into small communities. A drifter wanders through the landscape with his mule Bill. He dislikes civilisation but is forced to make concessions, putting on Shakespearean performances in the communities he passes through in return for food. General Bethlehem, the leader of the militant Holnist army, then raids the community he is visiting and the stranger is forcibly recruited into the army. The man makes an escape and shelters the night in the wreck of a car. In the car, he finds the skeleton of a postman. With no supplies, he takes the postman’s uniform and bag of letters. Coming to the next town, he tries to bluff his way in, saying that he is a postman making a mail delivery on behalf of the Restored United States Government. They are ready to shoot him when he produces mail from the bag for residents of the town. Invited in, he finds the townspeople are eager to believe in what he represents and the idea of the restoration of order. As he passes onto other communities carrying mail from the towns he has left, the idea of the restored postal service grows. Wounded and forced to hide in the mountains, he emerges after the winter to find that an entire postal service has spread across the country based on his myth and that his name has grown into legend. However, this has come to the attention of General Bethlehem who is determined to stamp out the postmen.

The Postman was a box-office flop when it came out, earning back less than a quarter of its $80 million budget. Almost all reviewers slammed it for its ardent flag-waving. It even won that year’s Golden Raspberry Award for Worst Film, somehow beating out Batman & Robin (1997) and Speed 2: Cruise Control (1997). Contrarily, I liked The Postman and continue to defend it through successive viewings.

What most of the critics fail to credit is that the film is a powerful piece of storytelling. It marshals myth on a grand scale – the myth of the greatness of the American nation, the myth of the reluctant hero, the myth of the basic goodness of ordinary American people, and the myth of redemption and restoration of the country that played out through a number of works of the 1990s such as JFK (1991), Independence Day (1996) and tv’s The X Files (1993-2002, 2016-8). Difficult and all as it might be swallowing some of the fervent patriotism, the film does engage in an intriguing discourse on how these myths might be wielded.

If nothing else, The Postman is the only post-apocalyptic entry among a horde of tedious Mad Max 2 (1981) clones that dispenses with action movie mentality and does something other than have car chases with mohawked crazies – you could point to star/director Kevin Costner’s previous film Waterworld (1995) as a perfect example of everything that The Postman is not. The film does feature a loner hero but his skills are not in combat but in cleverness of thinking and outwitting his opponents.

The film is adapted from The Postman (1983), a novel by David Brin, an author with a respectable legacy in science-fiction. The book was nominated for several of the major awards in the science-fiction community in the year it came out. David Brin is clearly a patriot who believes in the basic idea of decency of ordinary American people. He has stated that he wrote the novel as a reaction against the growth of survivalist communities and philosophies in the 1980s – at one point, the book suggests that it was the survivalists themselves who brought about the end of civilisation. Brin has voiced general support for the film, agreeing with the sections it dumps, support for some parts that it adds and being pleased with the overall adherence to his original ideas.

In some ways, by allowing the soul-stirring heroism and patriotism to carry the film, The Postman works better as a film than a book. The film has largely dumped the latter third of the book, including all reference to the artificial intelligence Cyclops and ‘augmented’ Holnist cyborg super-soldiers. This is most noticeable at the climax where Kevin Costner drops David Brin’s comic-bookish battle with a genetically engineered superman in favour of a grand Western-styled confrontation between armies on a plain. It is a beautifully written film at times – Will Patton’s general must come as one of the few villains in film history who argues for a set of ideals and a philosophy that comes in bullet points.

Kevin Costner does a wonderful job directing. The Postman was the film that Costner took up following his directorial debut with Dances with Wolves (1990), which won an Academy Award for Best Film and for Costner as Best Director. In fact, one is starting to arrive at the opinion that Kevin Costner is a better director than he is an actor. There is some part of him that clearly dreams of making classic Westerns as in Dances With Wolves and his subsequent directorial outing, the underrated Open Range (2003).

Similarly, The Postman is often consciously crafted as an epic Western in terms of its score and sweeping shots following horse riders across the plains. Directorially, it is filled with visually dazzling touches – a throwaway shot where a horse and rider in a grainy film perfectly fades into a horse and rider on a ridge; Costner lighting a cigarette on a roof against an abandoned 7-11 sign as the sun sets; or the camera constantly sweeping away to show entire towns and armies of people arrayed around hillsides. It is a beautifully designed film – one of the most impressive looking of all post-holocaust films with cities built up around the edges of dams, or a movie theatre around the edge of a quarry with the projection booth sitting on an island in the lake projecting the film onto the walls of the quarry.

On one level, you can appreciate that The Postman contains a ridiculous amount of flag-waving and patriotism. Yet at the same time, it is hard not to allow oneself to become swept up the enormous emotional triumphs the film carries – like the scene where The Postman is welcomed into the township for the first time or where he emerges from the mountain cabin to find his deception has blossomed into an entire courier service and he is regarded as a mythic figure. Or even the scene where Kevin Costner has to kill Giovanni Ribisi while pleading not to have to do so. There are undeniable moments of pretension – the concept of a hardened bandit army rioting to see a screening of The Sound of Music (1965) does strike a hard to swallow note. For most part however, Kevin Costner achieves a grandly epic sweep and a pulling of emotional strings that proves exhilarating.

In the cold light of logic though, The Postman tends to be long on patriotism and emotional stirrings and short on practicality. At most, it has the vague notion that people should get together and talk to each other more. (That and the appealing idea that wars should be settled in hand-to-hand combat between the leaders of opposing sides). You cannot help but afterwards question some of the screwy ideas it ends up presenting. That in an era when most people seem to be in favour of less government that the restoration of a bureaucracy – the US postal service – will be the salvation of America. Or that the belief that patriotism is good in itself and that even a lie is better than no belief at all.

One does balk somewhat in that for all its belief in idealism and the idea of America, The Postman is essentially about a confidence trickster as hero and how he pulls a scam on the entire American people – indeed, The Postman is not too different a film from Steven Spielberg’s Catch Me If You Can (2002), which found an admiration for the audacity of its hero’s confidence scams. At the same time as the film’s peculiar and patriotic messages turn one off, one cannot deny that it is a stirringly told story. The Postman is well overdue recognition, rather than consigned to the scrap heap of ridicule.

(Winner in this site’s Top 10 Films of 1997 list. Winner for Best Adapted Screenplay, Nominee for Best Director (Kevin Costner) and Best Supporting Actor (Will Patton) at this site’s Best of 1997 Awards).