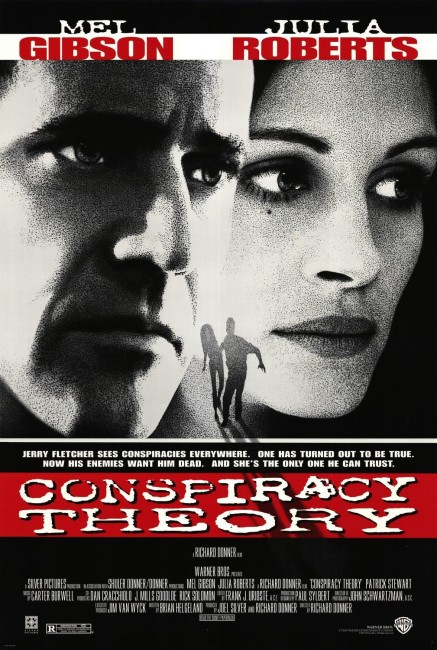 New York cab driver Jerry Fletcher is a flaky conspiracy theorist who is always regaling his passengers with his wacky ideas. Jerry has a crush on Justice Department lawyer Alice Sutton and is constantly trying to get in to her office to tell her his latest theories. Jerry is then abducted and drugged by the sinister Dr Jonas who wants to find out what he knows. However, Jerry manages to escape and begs Alice’s help. At first regarding Jerry’s story as crazy, Alice starts to discover that what Jerry is saying is true. The two of them are forced to go on the run as Jonas’s men start killing people who are connected to Jerry. Alice comes to realize that Jerry may have been part of an experiment to create a mind-controlled assassin and that he has now gone amok.

Conspiracy Theory was an attempt to jump aboard the fad for conspiracy theory films that came into vogue in the 1990s. This was sparked off by Oliver Stone’s high-profile JFK (1991), which gave credence to various theories about the assassination of John F. Kennedy being part of a vast conspiracy. Then came tv’s massively popular The X Files (1993-2002, 2016-8), which gave weight to the Roswell Crash, government cover-ups concerning the truth about UFOs and just about every fringe theory out there during the course of its run. Not to mention numerous imitators jumping aboard these fads. By 1997, the time was nigh welcome for someone to send it all up. Indeed, the same year also saw Men in Black (1997), which spoofed the alien visitors/government cover-up conspiracy with some amusement.

Conspiracy Theory came with some big guns attached – notably the on-screen pairing of Mel Gibson and Julia Roberts, two of the decade’s top A-list stars. The director was Richard Donner who had come to fame in the 1970s with hits like The Omen (1976), Superman (1978) and the Mel Gibson starring Lethal Weapon (1987). (A list of Richard Donner’s other genre films is at the bottom of the page). Alas, while Richard Donner seemed a promising name during the 1980s, the 1990s and beyond saw him lose his touch, turning out a series of forgettable works like Maverick (1994), Assassins (1995), Nick of Time (1995), Timeline (2003) and three Lethal Weapons sequels that turned the initially edgy franchise into something cute and cuddly.

Conspiracy Theory sells itself based on a certain idea – a conspiracy theory crackpot finds that one of his theories is actually true as sinister government agencies start hunting him. Now there is a certain idea here no matter how slim (although one cannot help but think making fun of conspiracy flakes is akin to trying to make jokes about the mentally ill and intellectually handicapped). Unfortunately, the idea goes disastrously wrong. Conspiracy Theory should have been a paranoia comedy that juggles the flakiness with the spooky reality but the film ends up not only missing the joke by a mile but then taking the premise with an absurd seriousness.

What starts out as a comedy-thriller poking fun at conspiracy theories ends up becoming a completely different film altogether where it is somehow turned into an A-budget action film with Mel Gibson and Julia Roberts being pursued by SWAT teams and whisper helicopters. By the end of the film, after far-fetched revelations about Mel Gibson being a mind controlled assassin and cover-ups of the murder of the heroine’s father, Conspiracy Theory is no longer even about the same premise that one entered the theatre on.

Indeed, by the end of the film the comic riff on conspiracy thrillers has become entirely irrelevant to the main plot – the sinister government agency is not even hunting Mel Gibson to silence him because one of his theories has come true as the publicity suggests but rather to either silence him because of or find out what he knows about the murder of Julia Roberts’ father. (It is difficult to tell which is the case, due to the fact that this exposition is being uttered by Gibson in a state of near mental collapse at the time). There is no explanation offered as to how a programmed assassin ended up working as a New York cab driver and a flaky conspiracy nut. In fact, by the end of the film, the original premise has been so absurdly overturned that the script is taking seriously ideas that it was earlier laughing at because of their absurdity – NASA trying to kill people with satellites. Possibly this is one of the most confused films that one has seen in some time.

There are certain flashes of humour that hint at what Conspiracy Theory could have been – notably the scenes in Mel Gibson’s apartment with locked refrigerators and stored thermos flasks. The film gets at least one good joke out: “Oliver Stone? He’s really a puppet of the Bush [Sr] government – he knows too much to be kept alive.” For all that, Conspiracy Theory is notably lacking in humour. Mel Gibson at least gets into the part, playing the cuddly wild-eyed lunatic role that he perfected throughout Richard Donner’s Lethal Weapon films again.

What Conspiracy Theory needed though was not to be treated as an A-budget thriller but a B-budget indie film. The idea needs a funkier approach. The model for this type of film is surely The President’s Analyst (1967), which sent up the 1960s spy fad and paranoia craze with delirious deadpan. Of course, there was the original The Manchurian Candidate (1962), which in all likelihood had much influence on Conspiracy Theory, which balanced the notion of mind control and political conspiracy/satire with an hilariously black dexterity. However, Richard Donner’s approach here is a lazy mainstream effort where he seems confused between whether he is making a comedy or a straight thriller and lets all possibilities inherent in the film’s premise slip through his fingers.

Richard Donner’s other genre films are:– the classic Anti-Christ film The Omen (1976), Superman (1978) and uncredited parts of Superman II (1980), the fine Mediaeval romantic fantasy Ladyhawke (1985), the updated Dickens tale Scrooged (1988), the interestingly dark children’s film Radio Flyer (1992), the dull Michael Crichton-adapted time travel film Timeline (2003) and Superman II: The Richard Donner Cut (2006), his originally intended edit of Superman II (1980), which he had been removed from after much in-fighting with the producers. Donner also acts as producer on The Lost Boys (1987), the horror anthology tv series Tales from the Crypt (1989-96) and its two film spinoffs Tales from the Crypt Presents Demon Knight (1995) and Tales from the Crypt Presents Bordello of Blood (1996), Delirious (1991) about a writer trapped inside his own soap opera, the monster hunter film Matthew Blackheart (2002), the voodoo film Ritual (2002), and the comic-book adaptations X-Men (2000), Constantine (2005), X-Men Origins: Wolverine (2009) and X: First Class (2011).