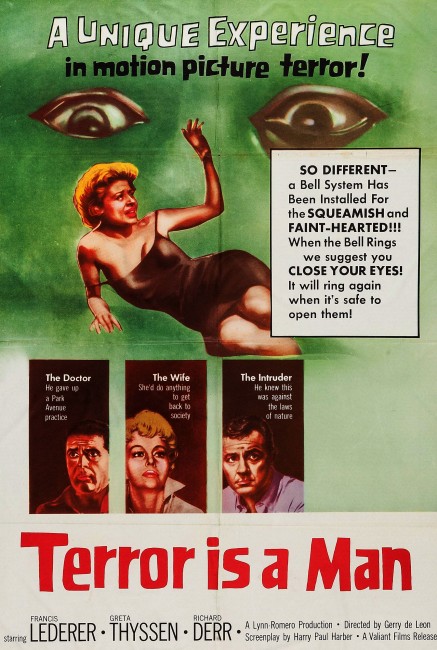 Shipwrecked American sailor William Fitzgerald is washed up on a tropical island where he is found and granted refuge by Dr Charles Girard. Fitzgerald and Girard’s wife Frances soon becomes attracted to one another. Fitzgerald then discovers that Girard is engaged in experiments to surgically turn animals into people.

In historical retrospect, Terror is a Man‘s greatest reputation is that it started off the Filipino exploitation fad of the late 1960s and 70s. A decade later, this film’s director Gerry De Leon had great international success with Mad Doctor of Blood Island (1969), which spun off a series of sequels and copies. There were several sequels and imitators. US quickly producers flocked to the Philippines to take advantage of low costs and lack of union regulations.

Terror is a Man is routine. The film was made in the Philippines, which affords it a certain torrid tropicality as a location – alas, director Gerry De Leon is too prosaic to do much with this. The Island of Lost Souls used its tropical setting with great torridness, even though its island locations never ventured beyond a Hollywood soundstage. This has the real thing by contrast but mostly wastes the opportunity. The middle of the film does develop an interesting subplot about the castaway hero engaging in an affair with the Dr Moreau figure’s wife (Danish beauty queen Greta Thyssen), all set with the monsoon rains as backdrop, which does attain a certain languid torridness.

De Leon also keeps the face of the creature carefully hidden behind bandages for the most part, which creates some build up, although its eventual unleashing is only a routine monster amok climax. The film also borrows from producer William Castle the gimmick of a horror bell that sounds during supposedly scary scenes – a surgical knife cutting into flesh – the sound of which proves to only be an old-fashioned telephone bell.

Filipino director Gerry De Leon became one of the key figures of the Filipino exploitation fad, churning out other such mad scientist and monster movies as Brides of Blood (1968) and Mad Doctor of Blood Island (1969) – notedly, these used the same plot essentials as Terror is a Man but what made them a success was the addition of gore and gratuitous toplessness. Eddie Romero co-directed these, and solo directed other efforts such as Beast of Blood (1971), The Beast of the Yellow Night (1971), Beyond Atlantis (1973), The Twilight People (1972) and The Woman Hunt (1973). The amazing story of the Filipino exploitation phenomenon and coverage of the making of Terror is a Man can be found in the documentary Machete Maidens Unleashed! (2010).