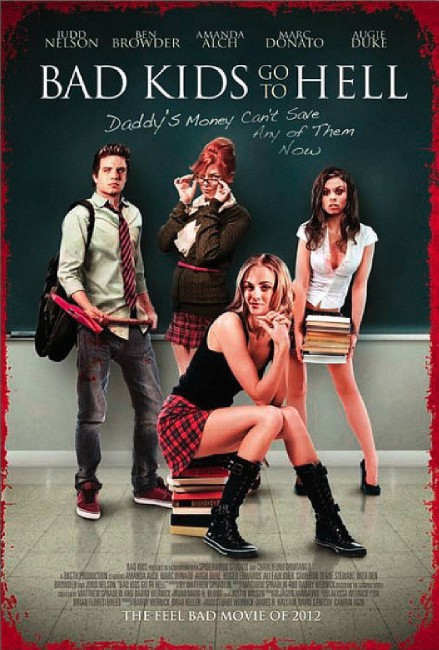 At the exclusive Crestview Academy prep school in Dallas, Matt Clark joins five other teenagers who have been sentenced to detention on a Saturday. They are locked into the library by school counsellor Dr Day and their cellphones confiscated. It is reputed that the library is haunted by the spirit of the Indian who owned the land, which was appropriated to build the library after he was killed. The Goth girl Veronica Harmon persuades them to conduct a seance to summon the Indian’s spirit. They do and a manifestation occurs but this causes Megan McDurst to die of an asthma attack. As the group try to get help, they realise that they are trapped inside the library. In searching for a means of escape, secrets about their pasts and the corrupt influence their privileged parents wield over the school come to the fore. However, something inside the library is also starting to kill the group.

This is a film adapted from the graphic novel Bad Kids Go to Hell (2010), a four-issue comic-book that was independently produced by Matthew Spradlin and Barry “Buzz” Wernick. The film appears to have been adapted directly from the graphic novel – there is no screenplay credit, for instance. Matthew Spradlin, previously a comic-book writer, made his directorial debut with the film version.

The promotion for the film suggested a sarcastic take on The Breakfast Club (1985) crossbred with a horror movie. The set-up of the diverse characters being locked in detention on a Saturday morning, even the look of the library, is the same. The Breakfast Club is explicitly referenced – at one point, Ali Faulkner gets a line: “This is not some fucking feelgood 80s movie of the year where for seven hours we put aside our differences and through commiserating about our naturally dysfunctional family lives or how lonely and alienated we each feel, we find some common ground and end up as BFFs.” Here Bad Kids Go to Hell gives the impression that it is welcomely puncturing the 80s teen angst drama with a healthy dose of 00s sarcastic attitude. To make the homage direct, Judd Nelson, one of the said dysfunctional kids from The Breakfast Club, is cast as the authoritarian school principal.

The main problem is the focus of the screenplay (at least when it comes to reviewing Bad Kids Go to Hell as a horror film). It is some way in until we get the seance scene and then for a very long time there is nothing in the film that can be described as horror. Instead, the focus goes onto the kids and a series of flashbacks that reveal what they did to get into detention and the secrets that each of them hold.

Moreover, when we get to the scene with the ghostly figure appearing out of the projector, we realise that the horror elements in the film, including the seance, sit on a line of ambiguity as to whether they are real or mundane in explanation. The explanation of the villain who has faked everything essentially makes Bad Kids Go to Hell into no more than a grown-up version of Scooby Doo, Where Are You? (1969-72) – kids witness spooky phenomena, believe it is down to some curse, before it is revealed as the contrived machinations of a villain who was usually the ordinary guy of the story.

You see that Bad Kids Go to Hell it has only scanty interest in being a horror film and more in being about punishing/exposing the hypocrisy of the children of privilege. (We never even get to find out what the big secret about Cameron Deane Stewart’s point-of-view character sneaking into the detention after being expelled was all about or the secrets it is implied he holds). Essentially what has happened is that we have gone from The Breakfast Club, the film’s obvious model, where a bunch of diverse kids who feel like misfits find a common bond, to a modern film that is less about the alienated connecting than a bunch of rich kids being punished for the crimes of their parents. It’s not a very forgiving film. A far better version of where Bad Kids Go to Hell seems to want to go that came out around the same time was the insanely creative Detention (2011).

The cast mostly hold up well, although it is Amanda Alch who totally rocks the show with gorgeous carrot red hair, shy girl glasses and an overly nerdy nervousness, especially in an entirely gratuitous sequence where she strips off and does a topless dance in the classroom (a sequence that never seems to make any sense in terms of her otherwise shy character).