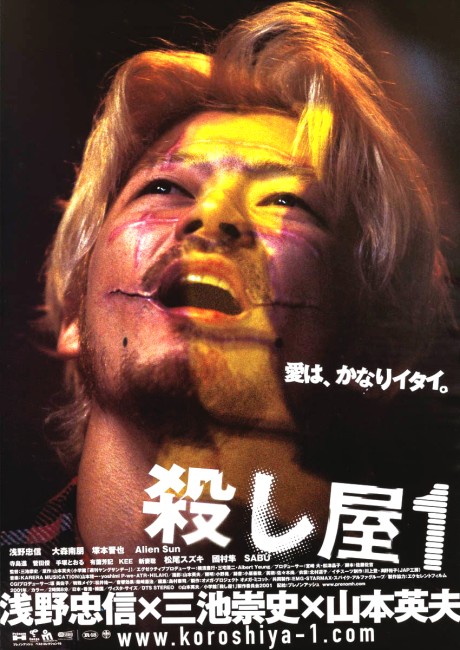 A gang of Shinjuku yakuza are shocked to find that their boss Anjo seems to have disappeared along with all their money. They determine to find their boss. The former cop Jijii tells of rumours he has heard that another gang has abducted Anjo. Kakihara abducts Suzuki, the leader of the rival gang, and brutally tortures him to try and find where Anjo is. For this, Kakihara and the Anjo gang are thrown out of the triad. They then learn that two useless gang members were called to remove Anjo’s decimated body from an apartment and that the real killer is the mysterious Ichi. Ichi is a shy and extremely socially reticent figure but can be moved to kill without emotion using razors in the boot heels of his armoured suit. Ichi is being controlled by Jijii, who has hypnotized him into believing that he is enacting retribution against the schoolyard bullies who tormented him, as well as those responsible for the rape of a girl that he was witness to. As Jijii unleashes Ichi to eliminate the rest of the Anjo gang, the insanely masochistic Kakihara relishes the coming showdown.

Takashi Miike is one of the most amazing discoveries in Japanese cinema in recent years. Miike is an extremely prolific director – having made some 80 films since his first appearance in 1991 and averaging around five films a year during that time. Miike has developed an enormous cult. The majority of Miike’s films have been in the yakuza genre – indeed, Ichi the Killer nominally falls into this genre too – but what has attracted Westerns audiences to the Takashi Miike cult is films like Audition (1999), Visitor Q (2001) and Ichi the Killer, which go waaaaaaay out on an edge in terms of taboo-defying wildness.

Ichi the Killer is a totally insane film. On one level, it seems like a standard Yakuza film, of which Takashi Miike has made dozens. It even starts in with the same blend of sped-up action, perversity and ultra-violence that marked Takashi Miike’s hilarious Dead or Alive (1999). However, this nominal Yakuza plot only serves as a springboard for Takashi Miike to serve up some of the most extreme sadism and torture that one has seen on film in some time. We get a taste of this in the opening moments in a scene that is almost a parody of the episode with The Cleaners in Pulp Fiction (1994) with two low-level thugs sent to clean up an apartment and finding it awash in blood, guts and pieces of brain, even body parts dripping from the ceiling.

The Kakihara character has a totally whacked-out introduction:– he is first seen from behind as a shock of blonde dyed hair and then turns around to reveal his face, a lattice of scars and a mouth where the edges of the lips have been cut into a Joker-like grin and his sliced-open cheeks are held together with safety pins. By the point when he puffs a mouthful of cigarette smoke out through the slits in the sides of his cheeks, we are wondering what on Earth we have sat down to watch.

Takashi Miike offers up an extraordinary profusion of sadistic images:– the sequence where Kakihira has Suzuki, the boss of a rival gang, strung up from the ceiling by hooks impaled through the skin of his back and tortures him first by poking a needle through his cheek, then a second one through his jaw and up through his mouth to come out between his teeth, and finally to pour scalding cooking oil on his back. After being chastised for doing such, Kakihara enacts self-punishment by cutting out his own tongue and then, in a typically Miike-esque moment of black humour, being required to answer his cellphone as though nothing happened, while all around him the other gang members are throwing up.

Elsewhere, we have numerous scenes of casual ultra-violence:– a woman being tortured for information by having her fingers bent backwards; the image of a sliced-off face sliding down a wall; a scene where Kakihara throws needles across a room to impale a man in the face as he sits bound in a chair. In one scene, a woman narrates to Ichi an incredibly perverse sexual fantasy about wanting to be raped and then sliced up.

There is a singularly demented sequence that leaves one totally flabbergasted – where Kakihara goes up to one victim, removes the safety pins that hold his cheeks together, then waits for the other man to punch him whereupon he wraps his entire unhinged jaw around the man’s fist, swallowing it all the way up to the wrist and then releasing him with his hand gored to the bone. There are a couple of sequences that fail to convince or seem silly – the image of a man being vertically bifurcated with a sword, which looks too obviously like a digital effect, and a silly sequence with Kakihara torturing a nightclub owner by pinching the skin of his cheeks until it is stretched way out – but the rest of Ichi the Killer is truly amazing.

Even more bizarre are the psychological motivations offered up. Kakihara is revealed to be an extreme masochist who obsessively searches for the boss because he has been unable to find anyone who can beat him to such an extreme. There is also the character of Ichi (Japanese for ‘one’) who seems to have been conceived as a parody of a superhero with a secret identity a la Superman/Clark Kent – except that rather than hop into a costume to go and save people, he hops into a costume to go and slice people up with razors from his boot heels and the rest of the time is an almost pathologically timid and nervous mouse.

The plot is confusing – it is never entirely clear which scenes are Ichi’s flashbacks and which are set in the present – but gradually this coalesces into a striking revelation about what is going on – one that has many resemblances to the later South Korean Oldboy (2003). The film climaxes in a totally whacked out ending where the planned rooftop showdown goes wrong and a disappointed Kakihara decides “Damn – nobody left to kill me” and starts to plunge needles into his ears to do the job himself, just as Ichi gets back up, throws a blade that impales Kakihara in the forehead and then kicks him over the rail, whereupon Kakihara falls to his death with a cry of “Wow, this is amazing.” Not unlike the film, really.

There were two prequels:– the 46 minute anime Ichi: Episode Zero (2002) and the live-action feature-length 1-Ichi (2003), both of which go back to tell completely different Ichi origin stories.

Takashi Miike’s other genre films are:– Full Metal Yakuza (1997), a yakuza/cyborg film; the teen film Andromedia (1998) about a schoolgirl resurrected as a computer program; The Bird People in China (1998) about the discovery of a lost culture; the torture and sadism film Audition (1999); the Yakuza film Dead or Alive (1999), which comes with a gonzo sf ending; the surreal Dead or Alive 2 – Birds (2000); the six-hour tv mini-series MPD Psycho (2000) about a split-personalitied cop tracking body-hopping terrorists; the surreal black comedy The Happiness of the Katakuris (2001); the controversial taboo-defying Visitor Q (2001) about a mysterious visitor; the Cyberpunk future-set Dead or Alive: Final (2002); the surreal Yakuza film Gozu (2003); One Missed Call (2003) about ghostly cellphone calls; the ultra-violent Izo (2004) about a cursed, immortal samurai; an episode of the horror anthology Three … Extremes (2004); the superhero film Zebraman (2004); the fairytale Demon Pond (2005); the supernatural fantasy epic The Great Yokai War (2005); Big Bang Love, Juvenile A (2006), a prison murder mystery with SF elements; the SF film God’s Puzzle (2008); YatterMan (2009), a gonzo live-action remake of a superpowered anime tv series; Zebraman 2: Attack on Zebra City (2010); the videogame adaptation Ace Attorney (2012); Lesson of the Evil (2012) about a murderous high school teacher; As the Gods Will (2014) with high school students being slaughtered by a doll; Over Your Dead Body (2014) wherein the roles in a ghost story play come to replay themselves in the lives of the actors; the gonzo horror film Yakuza Apocalypse (2015); Terra Formars (2016) about giant mutated cockroaches on Mars; Blade of the Immortal (2017) about an immortal samurai; JoJo’s Bizarre Adventure: Diamond is Unbreakable – Chapter 1 (2017); Laplace’s Witch (2018); and The Great Yokai War: Guardians (2021).