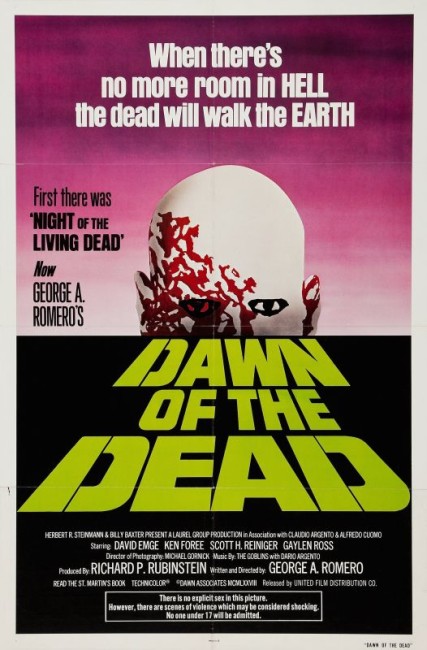 aka Zombies – Dawn of the Dead

As the living dead take over the cities, two soldiers and two civilians escape from a besieged tv studio in a helicopter. They land on the roof of a shopping mall. They take over, evicting the zombies and turn the mall into their own paradise. However, their idyllic world is soon threatened as the mall is invaded by a rampaging biker gang.

George A. Romero’s Night of the Living Dead (1968) had become a cult midnight hit and perhaps the most acclaimed independent horror film to emerge out of the 1960s. George Romero made several films in the ensuing decade, including the great The Crazies (1973) and his single masterpiece Martin (1976), among others – but none of these enjoyed the same success that Night of the Living Dead had.

In 1979, George Romero revisited his Dead series with Dawn of the Dead, which immediately became a cult midnight hit around the world. Dawn of the Dead came out of a co-financing deal with Dario Argento, the cult Italian horror director then known for the likes of Deep Red (1976) and Suspiria (1977). Dario Argento and George Romero became good friends and the two later collaborated on the Edgar Allan Poe anthology Two Evil Eyes (1990). Argento also brings on board the Italian rock group Goblin who created the cult soundtracks for several of his films during this era.

Dawn of the Dead is immediately a different film than Night of the Living Dead. The original was a harrowing survivalist tale that featured the shock of the dead inexplicably coming back and mindlessly, relentlessly attacking the living. It was filled with stark images of a social apocalypse. As a horror film, it shattered just about every convention of the genre. Here the tone is very different – the zombies are now much more comic, they are no longer a stark threat, rather they seem like stumbling farcical figures. Romero even literally stages a custard pie fight with them at one point.

The film is also less bleak in its ending. Many of George Romero’s films – the Dead trilogy and The Crazies – are harrowing survivalist films and ones that more often than not offer not even the assurance of a happy outcome. Dawn of the Dead is the most upbeat of all of these, albeit only vaguely so, fading out with a bleak exchange as the two survivors fly off in the helicopter: “How much fuel have we got?” “Not much.” “Alright.” Dawn of the Dead also features a Black hero but the results are not as taboo-breaking as they were with the casting of Duane Jones in Night of the Living Dead, it is just something that has faded into the background to the point that it is now taken for granted.

Where Night of the Living Dead was about people merely trying to survive, Dawn of the Dead is about questioning the values that the survivors are trying to fight for. As such, George Romero has construed Dawn of the Dead as a remarkable metaphor for the numbing effects of materialism and the complacency of consumer society. The film is filled with droll images of the meaningless of consumer society – of the group taking money from the bank registers even though they have nowhere to spend it and then tracing their way through the empty queue dividers, of zombies stumbling about the mall accompanied by muzak. It is said that the zombies gather at the mall because of, quite amusingly, a mindless homing instinct: “Why do they come here?” “Instinct. Memory. This was an important place in their lives.” Everything that goes wrong happens when the survivors act thinking only about material possessions – Scott Reiniger is fatally bitten when he goes back to the truck to get his bag; the mall is overthrown at the end when David Emge regards it as their turf and starts trying to defend it from the invading bikers.

George Romero directs with a kinetic charge and Dawn of the Dead is the most outrightly action-oriented of his films. What turned Dawn of the Dead into a cult hit and inspired a generation of Italian filmmakers is the splatter effects. The film’s entire raison d’etre is often the inordinate delight that Romero and Tom Savini find in the number of ways that people can mutilated and killed on screen. The film gets highly creative in this regard – shotguns blowing heads off at point blank range, the top of a zombie’s head sliced off with a helicopter blade, dispatches via a screwdriver twisted into a zombie’s ear, zombies biting chunks of flesh out of victim’s shoulders, people held down and their intestines ripped out and devoured by clambering zombies.

Upwards of 200 killings take place on screen and the film served to make a cult figure out of makeup artist Tom Savini, who also plays Blade, the leader of the invading biker gang. In the US, Dawn of the Dead was released uncut rather than face the choice of either cutting the gore down or receiving the dreaded X rating. An unrated film is usually considered commercial suicide, with many newspapers refusing to carry advertising for such films; despite this, Dawn of the Dead became a cult success. Nowadays, all of this can be seen on public tv in shows like the strongly Romero-influenced The Walking Dead (2010– ).

Dawn of the Dead was made on only a two million dollar budget. George Romero managed to get the use of a shopping mall in Pittsburgh where they were allowed to shoot between 11 pm and 7 am, over a four month period. This is something that presented a number of logistic difficulties, although equally is also something that allowed Romero to give the film a much bigger budgeted look than he would have been limited to in having to construct the sets.

George A. Romero’s other genre films are:– Jack’s Wife/Season of the Witch/Hungry Wives (1972) about suburban witchcraft; The Crazies (1973), an underrated film about a madness-inducing biospill; Martin (1976), a superb deconstruction of the cinematic vampire myth; Creepshow (1982), a collaboration with Stephen King and a homage to horror comics; Monkey Shines (1988) about a psychic link between a paraplegic and a murderous monkey; Two Evil Eyes (1990), a Poe collaboration with Dario Argento; The Dark Half (1993), from the Stephen King novel about a writer haunted by an evil nom de plume; and Bruiser (2000) about a man whose face suddenly becomes a blank mask. Romero has also produced the Tales from the Darkside (1983-5) and Monsters (1988-9) horror anthology series, as well as Deadtime Stories (2009), Deadtime Stories 2 (2010) and the remake of The Crazies (2010). His scripts include Creepshow II (1987), Tales from the Darkside: The Movie (1990) and the remake of Night of the Living Dead (1990).