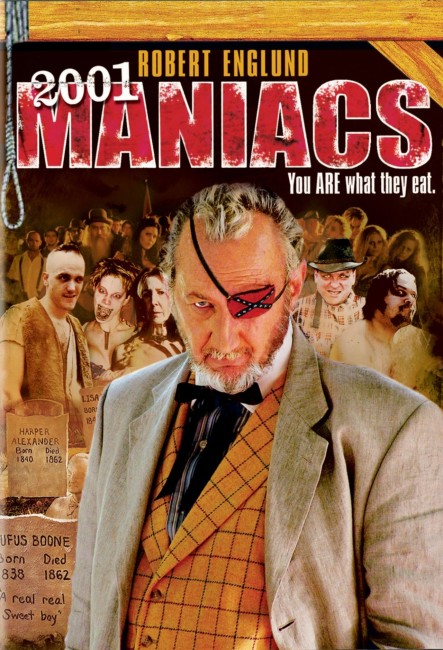 Three male college students drive to Florida for Spring Break, intending to spend the time partying. They and several others on the road are directed by a detour sign to take a different route and end up in the Southern town of Pleasant Valley . They are welcomed by the locals who are in the midst of the town’s Guts and Glory Jubilee. The three guys are tempted by some of the hot-looking women, while the girls from one of the other cars are wooed by local guys. However, this is only an opportunity for the locals to lure the travellers away and kill them.

Two Thousand Maniacs! (1964) was one of the films from cult director Herschell Gordon Lewis. Lewis gained a reputation for making films that had no other redeeming value other than serving up a series of outrageously over-the-top set-pieces in which victims are gorily splattered. Lewis’s films are often technically crude and so badly acted as to be unwatchable. Hardly anybody saw Two Thousand Maniacs! when it was released to drive-ins in the 1960s, few except splatter and bad movie cultists remember it, so why it ends up being remade here as 2001 Maniacs is a good question. [A couple of years later also saw The Wizard of Gore (2007), the remake of another Lewis splatter classic].

2001 Maniacs keeps the same basic plot as Two Thousand Maniacs!. Director Tim Sullivan replicates many of the gore set-pieces of the original – the scene where a victim is torn apart by horses pulling in four different directions; another where a victim is crushed by large rocks. (Oddly missing is Two Thousand Maniacs!‘ most famous scene where someone is pushed down a hill in a barrel-ful of nails – although that did turn up in the sequel). 2001 Maniacs even conducts a reworking of The South Will Rise Again, Lewis’s bluegrass theme song from the original, which is delivered here by two wandering hillbilly minstrels and then in a techno mix over the end credits.

Of course, while Herschell Gordon Lewis played Two Thousand Maniacs! seriously, Tim Sullivan plays 2001 Maniacs with tongue surgically implanted in his cheek. The clear influence on 2001 Maniacs surely comes from one of the names on the credits – Eli Roth, director of Cabin Fever (2002) and Hostel (2005), who is listed as a co-producer. 2001 Maniacs has been fairly much conceived in the same vein of Cabin Fever and its sarcastic, gore-heavy take on the slasher film of the 1980s. (The Cabin Fever connection is even further reinforced by Eli Roth making a cameo as the hitchhiker Justin that he played in Cabin Fever).

As with Cabin Fever, the result is a film that is fairly and squarely aimed at a frat boy audience and is unapologetic about piling on copious amounts of gore and naked breasts. The lines come fast and sarcastic, not to mention decidedly un-PC. Black biker Mushond Lee asks “Where do Black folk hang around down here?” to be told “From that tree down yonder.” The guys regard the locals with a groan of “we’re in Deliverance [1972] territory” (and later we see a parody of Deliverance‘s famous banjo duel – but played out with grunge guitars). Tim Sullivan takes maximum opportunity to lay everything over with innuendo – “May I offer you some fresh milk with your pie?” Christa Campbell asks, while draping her cleavage out of a low neckline. There are numerous jokes about kissing cousins and sex with barnyard animals, not to mention gratuitous lesbian scenes. 2001 Maniacs is one of those films where you either embrace its crude and rude take or hate it outright – on these terms, I must confess to having enjoyed it. It even manages to be a film where Robert Englund’s characteristically over-the-top acting manages to seem perfectly at home in the surroundings for once.

Tim Sullivan plies the film with considerable gore. Aside from replicating several of Herschell Gordon Lewis’s splatter sequences on a much bigger budget, he creates a number of his own – a scene where Dylan Eddington is bedded by Christa Campbell who ties him down and feeds him a tubeful of moonshine as she rides atop him, which turns out to be an acid that burns right through his body and the bed below; gay guy Brian Gross gets a massive skewer up his ass and out his mouth, leaving him like a pig on a spit; or where Wendy Kremer gives Matthew Carey a blowjob and then bites his dick off with a set of steel teeth. At the climax, Tim Sullivan gives us much more of a clearcut hero and heroine than Herschell Gordon Lewis did and engages us in their effort to escape from the town. (The film also has a surprisingly downbeat epilogue that contains another nifty gore effect).

The sequel was the weaker 2001 Maniacs: Field of Screams (2010), with Tim Sullivan also directing and Lin Shaye and Christa Campbell reunited.

Director Tim Sullivan had previously made the short film A Christmas Treat (1986) about a psycho Santa but did not make his feature-length directorial debut until 2001 Maniacs. Sullivan subsequently went onto make the horror film Driftwood (2006) and the I Was a Teenage Werebear episode of the anthology Chillerama (2011). Sullivan has also written segments of the ghetto horror anthology Snoop Dogg’s Hood of Horror (2006) and has produced Bloody Bloody Bible Camp (2011) and Cut/Print (2012).