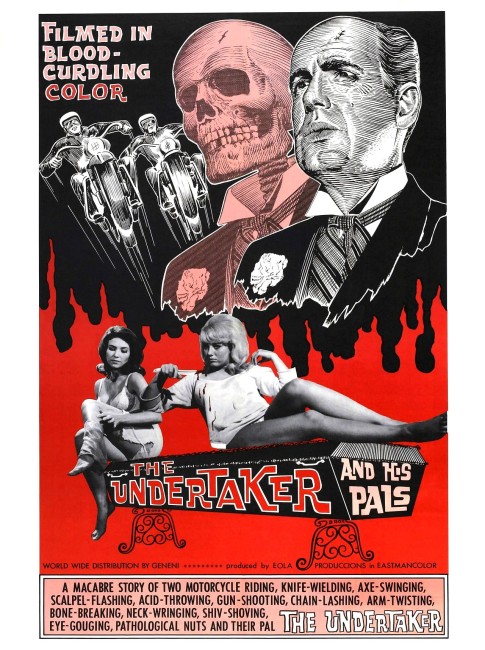 A group of three motorcycle riders are cruising the city killing victims and removing their limbs. Private detective Harry Glass becomes involved when his secretary Ann Poultry becomes the sixth victim. Behind the killings are Skip and Doc, the weird duo that run the diner where Harry eats, who are taking the bodies to carve up as the specials of the day they serve. They have joined forces with Mort the undertaker who runs the local Shady Funeral Parlor and is using the opportunity to drum up business for his over-hiked charges.

The Undertaker and His Pals is a unique exploitation film. If there ever was a genre anyone actually called grindhouse (as opposed to films that modern people have thrown a trendy label at), then is surely a prime example. The film was regarded as fairly outrageous in its day with the original cut (that no longer exists) purportedly being far more extreme than the one we ended up with.

The film has taken the basics of the Sweeney Todd story – people serving up butchered human remains in their diner, added a smarmy psychopathic undertaker rather than a barber – and transplanted the mix to 1960s Los Angeles. That The Undertaker and His Pals is not very good, it goes without saying. One is reminded of the cheesy grind of a Ted V. Mikels – in particular, Mikels’ The Corpse Grinders (1971) – but T.L.P. Swicegood actually has a much more competent grasp of the basics of filmmaking than Mikels ever did.

Swicegood goes for a sensationalism as witness the opening scene where Karen Ciral returns to her apartment, strips to her underwear before the house is invaded by three motorcycle helmet wearing men who stab her and then prepare to cut her up. Fairly standard stuff for a slasher movie in the ensuing decades but it would have been undeniably racy and shocking back in 1966 when cinema had only just discovered the splatter film with Herschell Gordon Lewis’s Blood Feast (1963) three years earlier. There is an equally outrageous scene in the middle of the film where Warrene Ott as the secretary who applies to work for Rad Fulton is attacked and cut open and we see the killer pulling out organs from her insides (actual surgical footage), before it is revealed she is still alive.

Swicegood also goes for goofy comedy – the changing expressions in the photo of the sailor boyfriend as Karen Ciral is attacked in the opening scene, or a slapstick sequence where pompous undertaker Ray Dannis gets his foot caught on a skateboard and goes skidding along the sidewalk and out onto the street. On the whole, The Undertaker and His Pals is a cheap and tatty film – exactly what you expect of it – but not an entirely unwatchable one.

The Undertaker and His Pals was the only film directed by T.L.P. Swicegood. Elsewhere, Swicegood only ever wrote the script for Escape from Hell Island (1963) and one episode of The Untouchables (1959-63).