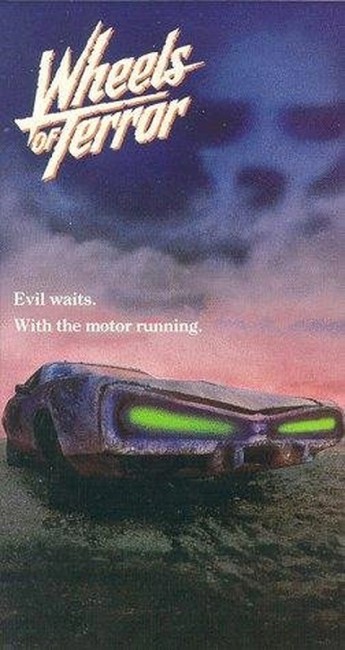 Laura McKenzie has left the big city and moved to sleepy Copper Valley where she has begun a job as the school bus driver. Copper Valley is being terrorised by a mystery stalker who snatches and sexually assaults children. Laura is certain that the assailant is the driver of a black car with mirrored windows. The car appears to be stalking her, although no others are witness to any of its appearances. The driver then snatches Laura’s daughter Stephanie. The only choice to save Stephanie is for Laura to give heated pursuit of the car in the school bus.

Steven Spielberg’s Duel (1971), a tv movie that was released to theatres, was enormously influential. It was a film that was stripped back to the essentials with one man (Dennis Weaver) in a car on a highway being relentlessly pursued by a lethal black truck. The driver of the truck was never seen, making the film into a primal man vs machine battle. Duel made Spielberg’s career as a director. For many years afterwards, the premise was imitated by other works such as Killdozer (1974), The Car (1977), Christine (1983) and Road Train (2010), which variously turned the lethal and driverless pursuing machine into an alien or supernaturally-possessed entity – see Films About Fantastical Vehicles.

Wheels of Terror, which was also made as a tv movie, is another of these Duel wannabes. It is a fairly blatant copy. Like Duel, we never get to see any driver – all we know is that the car is driven by someone who likes to abduct and molest children – and the film becomes more about the battle between two vehicles. Exactly like Duel, the evil vehicle is black, dirty and has mirrored windows. The only difference is that here it is the larger vehicle (a bus) that is the good vehicle, while the car (a Dodge Charger) is the nemesis and that the ‘good’ vehicle is pursuing the ‘bad’ vehicle rather than vice versa. Unlike the other abovementioned Duel imitators, this dispenses with any idea of a paranormal explanation for the vehicle.

Wheels of Terror spends more time than Duel did on the preliminary scenes before the chase begins. We get a number of scenes with Joanna Cassidy and her daughter, with her interacting with the people that maintain the garage, her driving the bus to and from the school and picking children up. These are interspersed with several scenes with the black car seemingly stalking her where the film tries to play a series of there again/gone again tricks on us, improbably having nobody but Joanna see the car in its appearances.

Fully two-thirds of the film is taken up by a single vehicular chase scene with Joanna Cassidy pursuing the car in the bus. These scenes contain some solid and reasonable stunt/action set-pieces. Among these, there are at least a couple of seat-edge scenes – one where the bus comes to a halt teetering on the edge of cliff and Joanna Cassidy desperately tries to get the faulty reverse gear to work as the car comes up behind and tries to ram them over; and another with the car driving alongside the bus on a quarry road as Marcie Leeds climbs out of the car’s sun roof and jumps across to the bus, left precariously hanging from one of the bus’s open windows at the same time as the car rams the side of the bus only inches beneath where she is.

On the other hand, the whole pursuit does leave you with some questions of safety – why Joanna Cassidy would think that engaging in a high-speed vehicular chase while driving a bus full of children would not get her fired from her job, let alone criminally prosecuted; and secondly, why someone would so recklessly attempt to ram and try to drive a car containing her own daughter off the road.