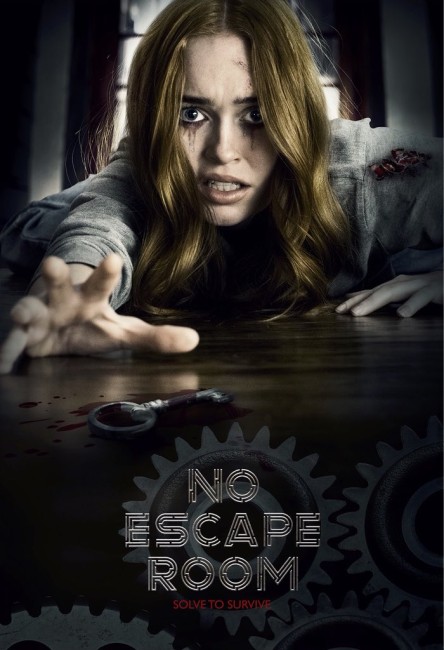 Michael and his teenage daughter Karen are travelling through the countryside when their vehicle breaks down. While waiting in the nowhere town for the car to be repaired, Michael finds an ad for an escape room in a local paper and they decide to fill the time by attending. At the location, they are joined by a couple Tyler and Melanie and a solitary guy Andrew. As the session gets underway and they try to solve the puzzles, members of the group start to be killed. They cannot be sure if the escape room is haunted or it is all part of the show.

The phenomenon of the escape room – where people are locked in a room or rooms and have to interpret a series of clues to find a way out within a given length of time – has grown as a form of entertainment in the 2010s. By the end of the 2010s, there were escape rooms in most major centres around the world. Towards the end of the decade, the phenomenon started to emerge onto film in a bunch of the films that came out all around the same time. There were two films in the same year entitled Escape Room (2017) and Escape Room (2017), followed by No Escape Room, the high-profile theatrically released Escape Room (2019), which led to a sequel Escape Room: Tournament of Champions (2021), and No Escape (2020).

The small body of escape room films have quickly exhausted most of the cinematic possibilities of the idea within a short space of time – where either the people inside the room(s) are trying to escape because of a supernatural/occult threat of some type or a more mundane agency like a killer. The frustrating thing about No Escape Room is that it is not clear at the end what exactly is going on in the house and who or what is killing people. The characters that appear may be ghosts while it is also speculated that this could well be part of the illusion and due to some type of human agency, although the end definitely opts for supernatural explanations.

The end does reach an interestingly ambiguous place. [PLOT SPOILERS] Here Mark Ghanimê and Jeni Ross make an escape from the house. There is the suggestion that they have travelled back in time to the point when they entered the diner and that the person in the bathroom stall was them hiding, before they exit the diner as they hear their earlier selves talking to the waitress (Kate Hurman). Outside they find their vehicle now repaired and waiting. The kicker comes as they get into the car and find that they glove compartment and key slot are protected by the same combination locks that appeared throughout the house – in other words that they are still caught up in the escape room’s illusion.

Director Alex Merkin delivers a competent film. He does well in terms of providing atmosphere and texture – the house does look spooky. On the other hand, there is nothing to any of the scenes where the victims are killed that raises the pulse in any way. It all feels like tepid scares that are played safe for the tv movie audience. Jeni Ross at least proves a promising face.

Alex Merkin first appeared with the horror film Across the Hall (2009) based on his earlier short film. He made several non-genre films, mostly thrillers, with Percentage (2014), The Wrath (2015) and Altitude (2017), before returning to genre material with House of the Witch (2017) and The Art of Murder (2018).