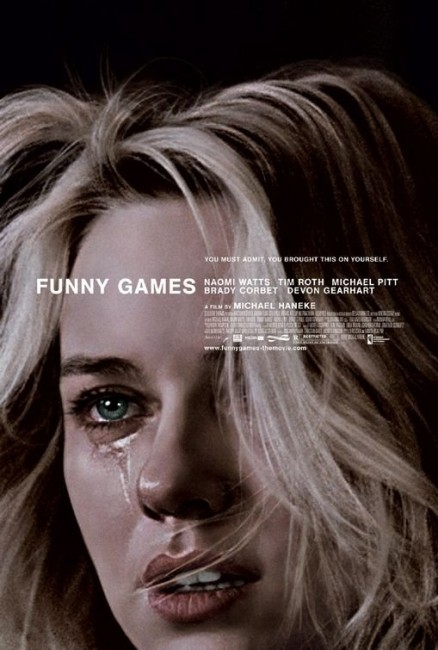 Husband and wife George and Ann Farber and their young son Georgie head to their lakeside home for a holiday. Soon after they arrive, they are visited by two boys, Peter and Paul, who have come from the neighbour’s house asking to borrow some eggs. However, the boys keep dropping the eggs and then their politeness abruptly erupts into violence. They make the Farbers prisoner and play a series of cruel and sadistic games, making a bet that all three of them will be dead within 24 hours.

Austrian born Michael Haneke is one of the most constantly interesting directors on the continental scene. Haneke’s breakthrough film was Funny Games (1997), an unnerving film about two teenage boys who play a series of sadistic games with a middle-class family. Funny Games was as noted for its cruel and casual violence as it was for Haneke’s willingness to wind its audience in by implication – having the boys turn to the camera and ask the viewers who they would bet on, asking for advice on what they should do or rewinding events when they don’t turn out to their liking. Since Funny Games, Michael Haneke’s star has continued to rise with films like Code Inconnu (2000), The Piano Player (2001), Time of the Wolf (2003), Hidden (2005), The White Ribbon (2009), Amour (2012) and Happy End (2017). There is never anything comfortable and easy about Michael Haneke’s films – he constantly pushes characters into difficult places and makes audience participation definitely not a passive spectator sport.

Funny Games U.S. was Michael Haneke’s attempt to break into the American mainstream market. It is a direct remake of Funny Games. Haneke has done what Gus Van Sant did when it came to his remake of Psycho (1998) and remade the original shot-for-shot (Funny Games U.S. reigns in about a total of three minutes longer in running time than the original did). The production designers have even created an exacting replica of the sets for the house in the original film.

This time of course Haneke has shot the film in English rather than German and has cast the lead roles of the husband and wife with star names like Naomi Watts and Tim Roth. [Interestingly, Funny Games U.S. marks Naomi Watts’ third appearance in an English language remake of a foreign horror film – she having also appeared in The Shaft (2001) and The Ring (2002)].

Like Gus Van Sant’s Psycho, there is a huge question mark of ‘why?’ hanging over the remake – Funny Games U.S. seems a film that has only been made for people who cannot read subtitles, not surely for the people who enjoyed the original as their seem nothing more pointless than watching the same film all over again in every detail but for the faces playing the parts.

On the up side, such a closely copied film cannot help but result in an effort that works in all the ways that the original did. That said, there are a number of subtle changes between the two versions. There are places where the cues are slightly off – the opening gag of the family playing classical music as they set off on their vacation, which is then abruptly replaced by loud and nasty thrash metal, was a perfect introduction in the original but here gets drawn out to the point that the gag misfires. The meta-fictional gags with the boys referring directly to the camera and taunting the audience are still there but a lot more subdued than one remembers them being the first time around.

Nevertheless, when it gets to the drama in the middle, Michael Haneke delivers the sadistic psychological games with the same harrowing effect and brutality he did in the original. The disappointment though is that Haneke, having made the film for the US market, has soft-pedalled the violence – the killing of the dog and child are not depicted, while the shooting and wounding of Tim Roth with a golf club take place off-screen. The effect is akin to The Grudge (2004), which remade the Japanese original, but soft-pedalled the scares so as to pitch the film to the PG-13 audience share (even though Funny Games U.S. came with a US R-rating).

Particularly noticeable is one of the most harrowing shots in the original where the husband is shot and Susanne Lothar must crawl across the lounge and gather herself together before the boys return. It is replayed here but for some reason Michael Haneke eliminates almost all depiction of Naomi Watts’ grief and the scene is without any comparable emotional effect.

Naomi Watts and in particular Tim Roth do well in their respective roles, although the best performance comes from Michael Pitt. Pitt has done some roles in recent years that seem geeky if not coming from another planet altogether – the teen killer in Murder By Numbers (2002), the lead in the very weird Rhinoceros Eyes (2003) and as a mumblingly incomprehensible Kurt Cobain in Gus Van Sant’s Last Days (2005).

My initial thought was that Pitt was completely wrong as the replacement for Arno Frisch, who was one of the finest aspects of the original. Nevertheless, Pitt rises to the occasion and does extremely well in the role. The two boys have been made to seem a lot prettier than they were in the original but both, particularly Pitt, do especially well, balancing the same perfectly polite manneredness with casual sadistic violence without even a moment’s aforethought – especially good being the scene where Michael Pitt elbows Naomi Watts out of the yacht into the water without even pausing in the conversation he is having with Brady Corbet.

(Nominee for Best Supporting Actor (Michael Pitt) at this site’s Best of 2007 Awards).