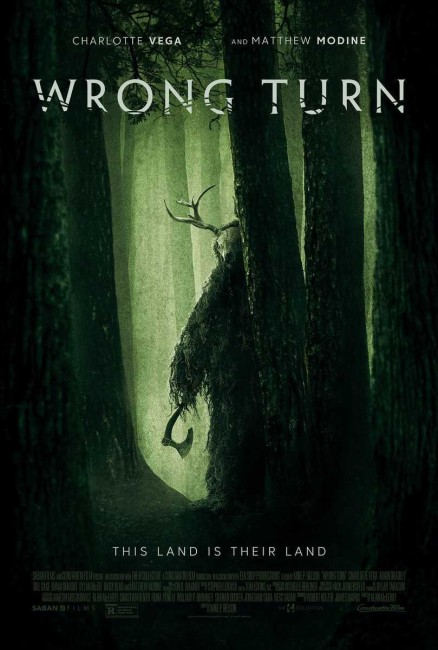 Scott Shaw arrives in the small rural town of Wrenwood, Virginia. This was the last known position that his daughter Jen contacted him from as she, her boyfriend Darius and two other couples set out to hike the Appalachian Trail. Six weeks earlier, the group arrived in town and, like Scott, found the locals unwelcoming in their redneck ways. As they set out hiking, Darius suggested they divert off the trail in search of an old Civil War fortress. In doing so, they stumbled into an area of the mountain that was littered with traps and were then attacked by figures wearing masks made of animal skulls. Thinking that the masked figures had killed his girlfriend, Adam killed one of them. They were then captured by members of The Foundation, a group that was set up in 1849 when it was believed the country was in a state of imminent collapse, who have created what they believe to be the perfect society. There they were placed on trial for murder.

I saw Wrong Turn (2003) during its original theatrical run. I thought it an average variant on the Backwoods Brutality film – the name I give to the genre that began in the 1970s with works like Deliverance (1972) and in particular The Texas Chain Saw Massacre (2003) in which innocent city types run afoul of hillbillies and in-bred hicks and are brutalised and tortured. The genre made a strong comeback in the 2000s. While Wrong Turn seemed a strictly average entry in the genre, the surprise was that Constantin Film and Summit Entertainment spun it out as a series of sequels and prequels with Wrong Turn 2: Dead End (2007), Wrong Turn 3: Left for Dead (2009), Wrong Turn 4: Bloody Beginnings (2011), Wrong Turn 5: Bloodlines (2012) and Wrong Turn 6: Last Resort (2014).

This new version is directed by Mike P. Nelson who had previously made the horror film Summer School (2006). I had been quite impressed with Nelson’s previous film the post-holocaust film The Domestics (2018). The reboot even has a script by Alan McElroy, the screenwriter of the first Wrong Turn.

Wrong Turn 2021 can be considered a reimagining of the series. The original film featured a group of young people who strayed off the road and ran afoul of a backwoods family who proceeded to torture and kill them. The sequels featured assorted variations on this. The 2021 film keeps the same overall essentials that the first film had – a group of young people from the city on a trip through Virginia; their taking a detour off the standard route and ending up in uncharted territory; their being pursued by backwoods locals who have turned the area into a series of death traps.

The series has been updated to the 2020s in some interesting ways. Most obvious is that the group of young people are much more diverse in comparison to the entirely whitebread complement of kids in the original – we now have three couples, the primary one being mixed race, as well as a gay couple. The original 1970s Backwoods Brutality films were about 60s Flower Children getting an abrupt awakening to the world in backwoods America; this is the interesting idea of a group of hipsters coming up against rednecks and backwoods in-breds.

The film also blurs the traditional morality of this type of story. There is the interestingly aggressive character of Dylan McTee’s Adam who is dragged away in a chain and then escapes and returns to beat one of the skull-masked people to death thinking they have killed his girlfriend, all before girlfriend Emma Dumont suddenly turns up alive. The film then becomes something of an I Know What You Did Last Summer (1997) scenario where the rest of the group agree to flee the scene over heroine Charlotte Vega objections that they have just conducted an act of murder.

One of the most interesting parts of the film is the substitution of the original’s backwoods family with The Foundation, a group of separatists from the 19th Century – in one intriguing scene, Charlotte Vega is asked which is better the world she came from or the backwoods society where they have that has eliminated most social ills and where everyone lives in peace and equality. The most intriguingly morally conflicted scene is where Charlotte offers herself as breeding material to the group to spare their lives, an interestingly proactive variation on the trope in Backwoods Brutality films where one or more of the women are usually made prisoner for breeding purposes.

Mike P. Nelson delivers quite a reasonable variation on what feels at the outset like it is going to be very familiar material. The figures with the skull masks make the film look something quite unearthly – indeed, it made me instantly think of the Folk Horror beings of Sator (2019), which I had only seen a week before this. The trial scenes are charged and unlike any Backwoods Brutality film you have seen before. Nelson is sparing on the bloodshed but generates reasonable tension during the escape scenes. The film comes to a particularly good ending and an excellent final shot that keeps on going as the end credits run. In my opinion, this emerges as the best of the Wrong Turn films to date.