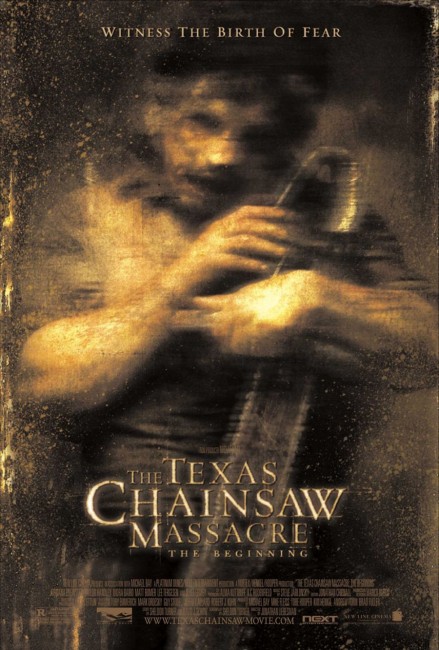 In 1969, the cattle slaughtering plant at a small Texas town is closed down, resulting in mass unemployment in the township. One of the employees, the hulking, intellectually handicapped Thomas Hewitt, kills the supervisor who insists that he leave. Sheriff Hoyt takes Hewitt’s stepfather Charlie to get Thomas to see reason but instead Charlie kills Hoyt and decides to don the sheriff’s uniform himself. Due to the hardships caused by the closure, the Hewitt family decide to now start eating human meat. Meanwhile, brothers Dean and Eric Hill are travelling across Texas with their respective girlfriends. Eric is about to sign up for another tour of duty in Vietnam but Dean is having difficulty telling Eric that he is planning to cross the Mexican border and becoming a draft dodger. They are then shot by a woman biker and crash off the road. Posing as the sheriff, Hewitt happens by and takes the four prisoner, where he chains them up in his house and starts brutalising them.

The Texas Chainsaw Massacre: The Beginning is a prequel to the 2003 remake and offers up the intriguing idea of an origin story of the cannibal family. Thus Sheldon Turner’s script – dreamed up in conjunction with Splatterpunk writer David J. Schow who also wrote Leatherface – explains how the family came to prefer eating human meat and shows Leatherface picking up his chainsaw and putting on his mask of human skin for the first time. R. Lee Ermey, Andrew Bryniarski, Marietta Marich and Kathy Lamkin return to play the roles they did in the 2003 remake, while the original film’s director Tobe Hooper is again present as a producer.

There is lip service paid to the Vietnam War and draft dodging but the only feeling you get is of how much the characters are modern teenagers, not a group of kids living in 1969. This is particularly so during a scene within the first few minutes of Taylor Handley tied up to a motel room bed as Diora Baird parades around in her underwear – these are modern teenagers, not kids who come from a generation that was just discovering how to have sex without being married for the first time. (As with The Texas Chainsaw Massacre 2003, the period setting has been made with a soft focus so as to not upset modern youth audiences with something too unfamiliar).

Whereas the other Texas Chainsaw Massacre films were inventive in their arrangement of the basics, the plot here unimaginatively follows the path of the original – group of youths cross Texas, are attacked by bikers rather than a disturbed hitchhiker, all end up being killed except for one girl survivor who in the last few minutes bursts out of the house and heads for the road pursued by a chainsaw waving Leatherface.

It is not long before we are plunged into a genuine nastiness:- scenes with Taylor Handley and Matt Bomer chained up in the barn by R. Lee Ermey who wraps cellophane around Bomer’s face, nearly choking him to death before stabbing a knife to create a mouth hole; Ermey forcing Taylor Handley to do push-ups while he beats his back and legs with a rod, all the while lecturing about how he had to make the choice to eat human flesh while a POW during the Korean War; Diora Baird escaping in the tow truck but being dragged out the moving truck door by Leatherface and hauled away with a meathook in the back.

There is the eminently out there moment where we see two ladies sitting down to a cup of tea, having a conversation about the weather and brands of breakfast tea, while the table beneath them keep banging and the camera pans down to show Diora Baird chained up to the leg, struggling to get free. Jonathan Liebesman starts to give Eli Roth a run for his money in the gut churning scenes where we see Leatherface cutting the skin off Matt Bomer’s arm or a chainsaw being plunged right through Lee Tergesen’s body.

There is an incredible scene where Matt Bomer, imprisoned on the bench, has a chainsaw plunged through his stomach (as all the while Jordana Brewster cowers beneath the table) and his face sliced off by Leatherface who then sews it onto himself. R. Lee Ermey takes the opportunity to perfect the role he created in the earlier film, making Texas Chainsaw Massacre: The Beginning his film in a performance of flinty cruelty and alarmingly over-the-top madness.

There is the odd part where the gut churning mix topples over. Like the scene where Uncle Martin has been shot in the knee by Lee Tergesen and R. Lee Ermey orders Leatherface to chainsaw his leg off and then turns on Leatherface: “That’s goddamn sloppy. Even ’em up,” and has Leatherface cut the other leg off too. It is a scene that should probably have been cut as it makes the tone of the film slip over into black farce rather than the grimness that the rest of the show has been played with. Indeed, it is a scene that seems to belong more to the disturbingly sick joke with which Tobe Hooper played The Texas Chainsaw Massacre 2.

The other scene that does not work is the climax where Jordana Brewster makes her escape only for Leatherface, just like a generic slasher movie maniac, to pop up out of the backseat with a groan-worthy predictability. Although, I did like the film’s final image of Leatherface walking off down the Texas night backroads waving his chainsaw in triumph.