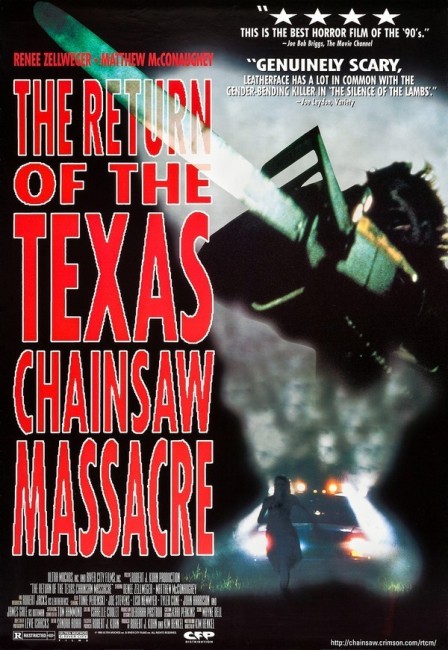 aka Texas Chainsaw Massacre: The Next Generation

May 22, 1996. Two couple drive away from a prom but as they head into the woods, they crash into another car speeding towards them. With both cars written off, they leave one of their group Sean behind with the injured driver while the other three walk to get help. After they leave, the tow truck operator Vilmer arrives, snaps the neck of the injured driver and then runs over Sean. The others end up at a nearby farmhouse where they are brutalised and killed by the deranged family that lives there. Jenny, the last remaining survivor, tries to make an escape as she is sadistically tormented and pursued by Leatherface and the insane Vilmer.

The Return of the Texas Chainsaw Massacre is reviled by most of the fans of the original. Contrarily, I ended up liking it and felt at a loss to understand the vehemence with which it is usually spoken. Of all the sequels, it is the only one that returns to the brutal mood of the original rather than wimps out, substitutes gore or launches off into grotesque black humour. Certainly, the film does not start out particularly promisingly. The teen characters seem brattish and one-dimensional – no different from the standard characters that stock Friday the 13th and A Nightmare on Elm Street sequels (on the other hand, one supposes, the characters in the first film did not seem too different either).

Far too often, Kim Henkel repeats scenes from the original wholesale – the party entering the house; one character being impaled on a meathook; Renee Zellweger being pursued through the house by a chainsaw-wielding Leatherface just like Marilyn Burns was in the original; the refuge sought at a nearby business that turns out to be run by the family and so on.

On the other hand, some of the scenes still retain the raw charge that Tobe Hooper captured first time around – the shock abruptness of where Tyler Cone is slammed in the forehead with a sledgehammer and Lisa Newmeyer is grabbed and thrown into a freezer; the scenes with Leatherface chasing Renee Zellweger through the house out onto the roof, up a tv antenna and through the woods with a chainsaw (the stunt people get a real workout here); and almost any scene that features Matthew McConaughey.

The characters in The Return of the Texas Chainsaw Massacre may not be as memorable as the ones in The Texas Chainsaw Massacre 2 but Kim Henkel comes up with an original freakshow of his own – Joe Stevens as the classics-quoting W.E.; Toni Perenski as a sexily confident businesswoman who lives with the family and acts as though nothing abnormal is going on as brutality and assault erupts around her (at one point, she passes through a pizza drive-in with a bound Renee Zellweger in the trunk and stops and opens the trunk to have a conversation with her).

Kim Henkel had apparently wanted Jim Siedow and Edwin Neal to repeat their roles as the cook and hitchhiker from The Texas Chain Saw Massacre but was unable to obtain either and so came up with the characters of W.E. and Vilmer to substitute. Most strikingly this time, Kim Henkel turns Leatherface into a crossdresser whose body language is distinctly effeminate. Robert Jacks plays the part with a perfect balance of deranged lunacy and simple-mindedness, screaming in inarticulate terror and mutely miming as he makes up his face.

The wildest of the new characters is Vilmer, where Kim Henkel manages to get a genuinely insane performance from Matthew McConaughey. This was just before Matthew McConaughey became an A-list star and recipient of frequent Sexiest Man Alive sobriquets. McConaughey charges about, brutalising people with his roar; or holding a knife to Renee Zellweger’s throat and counting down from ten and demanding that she give him one good reason why he shouldn’t kill her. McConaughey gets a great introduction, turning up in his tow truck, limping in his mechanical weird leg prosthetic (whose purpose is never explained), examining the injured victim and then snapping his neck “he’s dead now”, before getting back into his tow truck to pursue John Harrison, backing up to run him over several times.

In one totally deranged scene, Renee Zellweger turns a shotgun on Matthew McConaughey whereupon he tears open his shirt and slashes his chest with a knife, jamming the barrel of the gun into his mouth and roaring at her, before his mechanical leg brace starts malfunctioning and sends him into uncontrollable convulsions on the floor. And there is the dinner table scene where McConaughey sits spitting food into Renee Zellweger’s face as she pleads for help, before setting Lisa Newmeyer alight and then stomping her to death.

It is a totally mad performance that Matthew McConaughey gives and one that electrifies the film – it is hard to think of any other role in memory where someone has played a part where they have seemed so genuinely insane. Indeed, in the decade ahead, McConaughey became trapped in a series of lazy romcom roles and it only seems here and in roles like Killer Joe (2011) where he gets the opportunity to go completely crazy that he shows he is capable of some serious acting muscle. The other before-they-were-famous name present is Renee Zellweger who plays the lead victim role most convincingly.

Towards the end of the film, Kim Henkel lets his plot get out of control with an inordinate number of loose ends – a man in a business suit shows up, opening his shirt to reveal a chest covered with strange ritual markings that are pierced by rings, and then telling the family that he wants them to create terror as part of his plan. He then equally enigmatically turns up to save Renee Zellweger in his limo at the end – all without any clear explanation of who he is. The climax is also dependant on a number of vehicles just happening by all at once to save Renee Zellweger from pursuit – a couple in an RV who give her a ride, a light plane that appears out of nowhere and runs Matthew McConaughey down and then the businessman finally offering her a lift to freedom.

The Return of the Texas Chainsaw Massacre was the only film that Kim Henkel ever directed. Outside of co-writing the original and being listed as a producer on the various modern incarnations, he has only ever co-written Tobe Hooper’s Eaten Alive/Death Trap (1977), created the story for the horror film The Unseen (1981), written/produced the non-genre Last Night at the Alamo (1993), co-produced the horror film The Wild Man of the Navidad (2008), written/produced the horror film Butcher Boys (2012) and produced Found Footage 3D (2016). Henkel is currently a film studies professor in Texas.