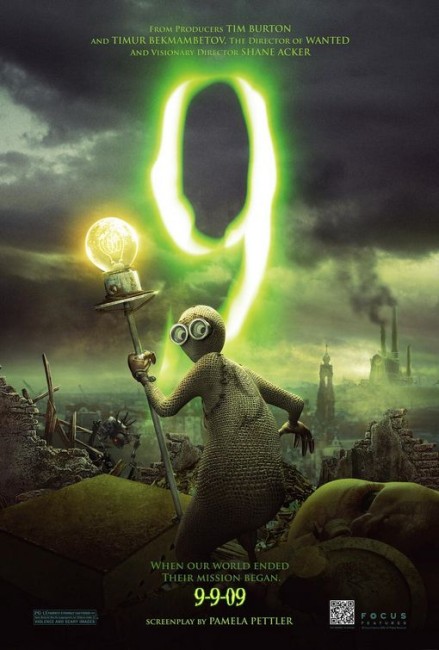 A tiny doll with only the number 9 written on his back comes to life. It ventures into the bewilderingly devastated landscape outside where it encounters another of its kind known as 2 who connects a voice-box for 9. They are then attacked by a giant mechanical dog that snatches up 2. The dog also snatches a strange talisman that 9 found near where he awoke. 9 is rescued by 5 and taken to a shelter led by 1 who keeps several other dolls safe from outside harm. 9 insists that 2 is still alive but 1 dismisses this. With the help of 5, 9 decides to head out into the wilderness again to rescue 2. They are aided by the female doll 7 who beheads the dog beast. 9 finds the talisman placed inside a port and idly touches it, only to activate a giant-size spider-like machine that starts attacking them. Back at the shelter, 1 refuses to believe in the new threat until the Machine sends other ramshackle machines it has created after them. Several of the dolls are captured during this attack and their lifeforce sucked up by The Machine. 9 persuades the others that they only course is stop living in fear and tackle The Machine but this requires 9 having to understand the secret of their creation.

9 – not to be confused with Rob Marshall’s Nine (2009), which also came out the same year – is like an object lesson in a dream come true for every novice filmmaker out there. It is proof of the frequently reiterated principle that the aspiring filmmaker should make a short film, do so well enough that it gets acclaim and becomes a springboard so that they are able to make a break into Hollywood and land a feature-film project. (It should also be said that for every person where this has worked, short film festivals are littered with two dozen more novice filmmakers where such maxim does not prove to be the case). 9 is one example where following this principle did work.

9 was the directorial debut of Shane Acker. Prior to 9, Acker had only a single professional credit in a feature film – having worked as an animator at the Weta Workshop on The Lord of the Rings: The Return of the King (2003). He made two other animated short films, which can be found at his website shaneacker.com, and then the 11-minute 9 (2005), which forms the nucleus of this film. The short film consists only of an extended version of the scene with 9 and 5 (instead of 2) fighting the mechanical dog, followed by a curtailed version of the resurrection climax. 9 was nominated for Best Animated Short Film at that year’s Academy Awards (although did not win). However, enough people saw the short film for Shane Acker to then be given a reasonable sum of money to expand the short into a feature film. Even big names like Tim Burton and Timur Bekmambetov, the Russian sensation who directed Night Watch (2004) and Wanted (2008), signed on to co-produce.

From the moment it starts, 9 is a fascinating film, quite unlike anything one has seen before. The world that Shane Acker creates is a beautifully stylized and completely original one. The colour contrast has been reduced until the film almost seems to be taking place in sepia-tone. It becomes fascinating trying to puzzle out what kind of world it is that we are in – it has an almost familiarity to it that suggests a post-holocaust variation of the present-day world. There are haunting touches – like when 9 idly picks up a discarded bullet and starts banging it before 2 quietly warns “Some things are best left alone,” or the image of a dead Stitchpunk sent floating off on a funeral bier with a single coin covering its entire face. In the flashbacks, the attacking machines seem to have been modelled on the Martian war machines in The War of the Worlds (1898), while the soldiers’ uniforms for the dictatorship have been copied from German Wehrmacht uniforms from World War II.

If one is to produce quick soundbite comparisons, 9 suggests something like a version of The Secret of N.I.M.H. (1982) taking place inside the world of Terminator Salvation (2009). While other reviewers rushed to find comparisons to the works of Jan Svankmajer, perhaps the nearest single nearest film you could find similarity to is the mini-gem The Secret Adventures of Tom Thumb (1993), which featured a tiny Claymation creature harassed and harried in a world of giant-sized patchwork mechanical monsters.

Shane Acker conceives an amazing array of creatures and inventions – a giant mechanical dog; a patchwork mechanical pterodactyl that seems to be driven by an old fan; a giant spider queen that devours the tiny Stitchpunks by sewing them up inside her carapace with a needle and thread; miniature candle-powered airships. Most of all, 9 defies the lazy thinking in the US that animated films have to be for kids. There is something scary and terrifying in the contrasts between the tiny Stitchpunk creatures and their menacing by monstrous, threatening machines that seem perpetually on the verge of tearing them apart. This certainly makes 9 a less-than-kid-friendly film (it was released with a PG-13 certificate in the US).

Shane Acker conceives frequently exhilarating action sequences with the Stitchpunks escaping from the maw of the giant pterodactyl, or trying to bring down the giant beetle-shaped mass of The Machine, and the fraught venture into the creature’s lair at the climax. Acker also creates some beautiful images – I particularly liked the scene where the Stitchpunks celebrate their triumph over The Machine by playing an old gramophone recording of Somewhere Over the Rainbow (1939) and then, as the song plays, the red eyes and dark shadow of The Machine slowly rises up out of the pall of smoke.

Various message board voices jumped on 9 and condemned it for its slim story. I tend to disagree – a story that allows one to guess about what kind of world it is in is not the same as one that never bothers to sketch out its world. The characters all have strengths and are finely delineated – particularly good being the Elijah Wood who imprints a determined heroic certainty on the show as 9 and Christopher Plummer as 1, the fear-filled patriarch of the community attempting to protect the group by keeping them from the outside world.

9 does operate on a series of Luddhite divides – tiny pitiful creatures that are representative of the last remaining human soul vs big monstrous machines that have gone amok and only want to destroy all that is human. One should note that is the same dichotomy that effectively worked for the Terminator films. One surprise is that Shane Acker chooses not to opt for a traditionally upbeat ending where the dead Stitchpunks are revived but goes out on a quasi-mystical ending where their souls go up into the clouds, creating a rain, which we then see has the tiny green germs of organic life inside them bringing the hope of rebirth.

9 is a superb directorial debut and one waits with great anticipation to see what it is that Shane Acker will do next.