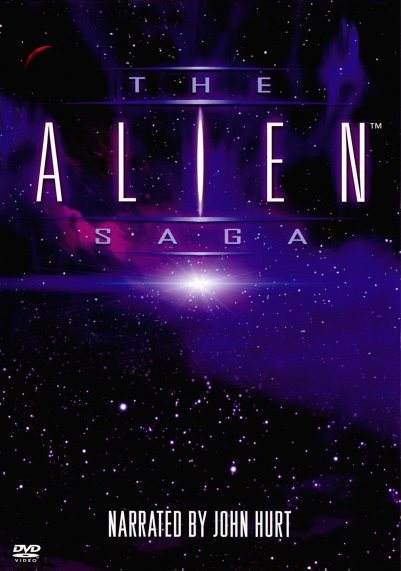 The Alien Saga is a feature-length documentary that explores the making of 20th Century Fox’s Alien movies – Alien (1979), Aliens (1986), Alien3 (1992) and Alien: Resurrection (1997). Director Brent Zacky has directed documentaries about several other 20th Century Fox’s films/series with Cleopatra: The Film That Changed Hollywood (2001) and The Omen Legacy (2001), which were designed to accompany video box sets or acts as dvd extras, and the tv series Infamous (2003-4) about celebrity crime cases, as well as having produced the tv series’ History vs Hollywood (2001-5), Rich and Acquitted (2016), Cover Story (2018) and the documentary Sex at 24 Frames Per Second (2003).

The Alien Saga starts out charting the origins of Alien from out of screenwriter Dan O’Bannon’s work on Alejandro Jodorowsky’s failed production of Dune in 1976. Interviewed, O’Bannon tells how he returned to the US penniless, was sleeping on Ronald Shusett’s couch and wrote Alien in a hurry because he needed money. The script was on the verge of being brought by Roger Corman when it was picked up by Brandywine Productions. (It is fascinating to imagine how Alien would have emerged had it been made on one of Corman’s typical penny-pinching budgets).

The Alien Saga spends a substantial amount of its time detailing the making of Alien. We get to see some rare behind-the-scenes shooting footage. There is some of the famous deleted scene where Sigourney Weaver finds the other crewmembers bound in cocoons and even some rare behind-the-scenes material of the shooting of the sequence. We even get footage of Sigourney Weaver’s screen test and a test scene where she has sex with one of the crew.

Alan Ladd Jr tells how he was instrumental in turning Ripley from a man’s role into a woman’s because they needed to spice the balance of the sexes up. (Dan O’Bannon reflects how this was done solely by turning ‘he’ into ‘she’ in the script, no other changes). We learn that others considered for the role of Ripley included Genevieve Bujold, Katharine Ross and Meryl Streep. Sigourney Weaver makes the interesting observation that Ridley Scott did not know how to rehearse actors and so many of the scenes ended up being improvised, which brought the problem of different egos and conflicting acting styles to the fore.

Dan O’Bannon tells how he wrote the script to intentionally shove sexual imagery in audience’s faces. The documentary happily gives some time over to H.R. Giger who was responsible for the design and construction of the unearthly title creation. In one of his few interviewed moments, Ridley Scott calls H.R. Giger a perfectionist. The film goes into much detail concerning the building of the Space Jockey and we see footage of its construction. The Space Jockey set was rehashed as the egg chamber (where the laser lights were apparently borrowed from a concert by The Who). Ron Cobb details the construction of the vast single set of the Nostromo interior and how he devised the then innovative gritty industrial look using parts cannibalised from the interior of a Vulcan bomber and used tv sets. The film devotes considerable time to the construction of the face hugger and chestburster, showing us behind the scenes footage of shooting these scenes. It even goes into some detail over the single four-second shot where the egg bursts open and attaches itself to John Hurt’s face. Sigourney Weaver and Tom Skerritt recount how Ridley Scott never prepared any of the cast for the scene where John Hurt’s stomach erupts at the dinner table so as to get more authentic reactions and how Yaphet Kotto was freaked for two weeks afterwards.

Not as much time is given over to any of the sequels. Of this, Aliens gets the lion’s share. Sigourney Weaver talks about the considerable ‘pro-Ridley’ feeling on the set of Aliens and dislike of James Cameron as the new pretender, how when Cameron set up a screening of his previous film The Terminator (1984) none of the crew turned up. Sigourney Weaver recounts her annoyance at the removal of her character’s background footage from the final cut. We do get to see some of the missing scenes from Aliens, including Ripley’s discovery of her daughter’s death and Newt’s family discovering the alien ship, most of which can be found in Cameron’s Aliens: The Special Edition (1992).

Not much time is spent on Alien3. The lengthy production problems the film experienced are mentioned but largely glossed over, although we do see one or two storyboards from the proposed Vincent Ward version. Similarly, there is not a huge amount of time given over to Alien: Resurrection. Sigourney Weaver tells us how Jean-Pierre Jeunet spoke little English and recounts the amusing anecdote of how he took an entire day to shoot the basketball potting sequence without success and was about to give up only for her to get it on the very last shot.

The Alien Saga was released before Alien vs. Predator (2004) and AVPR: Aliens vs Predator Requiem (2007) or any of the prequels but does have the famous last words of David Giler dismissing the idea: “Alien vs. Predator would be a bit like Godzilla vs Mothra.” (It should be noted that Giler acted as a producer on both the said Alien/Predator crossovers)

One of the great disappointments about The Alien Saga is that none of the directors of any of the four films are interviewed. We do get a small amount of interview footage of Ridley Scott that was shot in 1991 and of James Cameron that was taken in 1997 but this is all old material and was not shot specifically for The Alien Saga. Of David Fincher and Jean-Pierre Jeunet, we see nothing at all except a couple of behind-the-scenes shooting stills.